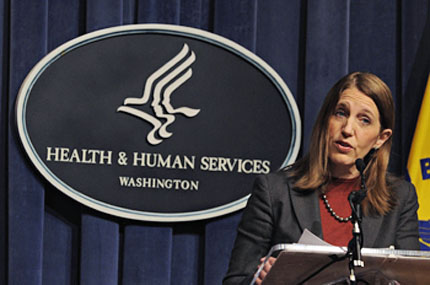 Every day here at HHS, we work hard to ensure that all Americans have the building blocks to lead healthy and productive lives.  That is especially important for groups that have unique health needs or have traditionally been underserved, like the lesbian, gay, bisexual, and transgender (LGBT) community. This week is LGBT Health Awareness Week, and I wanted to take the opportunity to highlight the progress we’ve made in our work to ensure LGBT Americans have the same rights and protections as other Americans.

So what does all this mean for those in the LGBT community?

We know that, on average, LGBT Americans suffer from higher rates of cancer, obesity, tobacco use, HIV/AIDS and mental illness than the rest of the nation. Five years after the Affordable Care Act was signed into law, we know we’ve made real progress.

Today, because of the Affordable Care Act –

New regulations also include critically important non-discrimination provisions to prevent companies from discriminating based on sex, sexual orientation, or gender identity. [pullquote]LGBT Americans suffer from higher rates of cancer, obesity, tobacco use, HIV/AIDS and mental illness than the rest of the nation.[/pullquote]

We’ve taken a major step forward when it comes to connecting folks with the care they need and improving outcomes for those with chronic conditions like HIV/AIDS. When Americans with pre-existing conditions are no longer denied or dropped from coverage, they can count on preventive services like HIV testing. Knowledge is power, and removing cost barriers to testing is a big help in the fight against HIV/AIDS.

Our next challenge is making these historic changes work for individuals by connecting people to the services they need—going from “Coverage to Care.”

Here at HHS, our “Coverage to Care” campaign is about empowering people to take control of their own care. It focuses on three health priorities: connecting people to the care they need; teaching them how to understand their benefits and their bills; and giving them the tools to make healthier decisions for a healthier life.

If you would like to learn more about how to take control of your health, or how to help others we have created a number of resources. One that I want to especially highlight is the “Roadmap,” a straightforward guide available in eight languages, which explains how to understand costs, make appointments, and important ways to maintain a healthy lifestyle.  You can find videos and printable guides at HHS.Gov/CoverageToCare.

Health care is a fundamental building block to a successful life, and that’s why we will continue to work for health equity for all Americans, during LGBT Health Awareness Week and beyond.