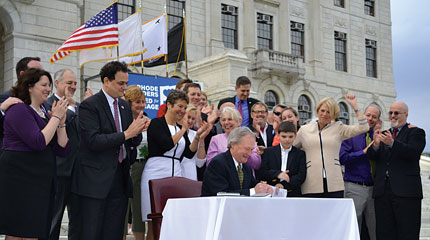 During the first week of May, Rhode Island governor Lincoln D. Chafee signed a Marriage Equality Act that will allow same-sex couples to marry in the state. The Independent governor signed the act after the House of Representatives voted 56-15 in favor of marriage equality.

“We were certainly thrilled by the vote totals in both chambers,” said Ray Sullivan, the campaign director at Marriage Equality RI. “It’s further proof that elections and grassroots organizing really matter. In less than two years, we helped change not only the makeup of the General Assembly, by working to elect five new pro-marriage senators and ten new representatives, but we successfully tried to open the hearts and minds of incumbent members who had previously been opposed to marriage equality. ” [pullquote]Beginning Aug. 1, 2013, the act will go into effect, allowing all Rhode Island same-sex couples the long sought-after privilege of marriage.[/pullquote]

Beginning Aug. 1, 2013, the act will go into effect, allowing all Rhode Island same-sex couples the long sought-after privilege of marriage. Started in July 2011, civil unions became available to Rhode Islanders, but after this August, these will no longer be offered. Same-sex couples currently in civil unions will have the option to swap their title for marriage as well.

“I still get a chill every time I think about it,” said RI State Representative Edith Ajello. “I am extraordinarily proud to have been a supporter and co-sponsor of the legislation for many years.”

The recently signed act was first brought to light on Jan. 3, 2013 by Senator Donna Nesselbush and Representative Arthur Handy, although Handy’s influence extends further, as he had been pushing the bill consecutively for the last decade. Always a strong supporter of civil rights, the Representative never dreamed he would have such an important role in history. Upon winning his initial election he was asked to be a sponsor of the cause and was more than happy to become a spokesperson in favor of the change.

“There were so many things that I think happened to help make this work, but I am really proud of my part … I’m also proud to be part of this sort of group of folks in the state that have worked hard to get it forward,” said Handy in an exclusive interview with The Rainbow Times. “I think that’s the right path. I don’t know that there’s the legal capacity to do [this on a federal level] today. So I think that states like Rhode Island and all the others that are [allowing marriage equality] are helping to keep moving that forward.”

Before signing the act, Gov. Chafee took the time to write an opinion piece for The New York Times entitled “Why I Am Signing Marriage Equality Into Law,” published May 1 and read internationally. [pullquote]”There were so many things that I think happened to help make this work, but I am really proud of my part … I’m also proud to be part of this sort of group of folks in the state that have worked hard to get it forward,” said Handy in an exclusive interview with The Rainbow Times.[/pullquote]

“Much of the argument for and against gay marriage has revolved around the morality of the issue,” wrote Chaffee in The New York Times. “Each side feels intensely that its position is more righteous than the other side’s. I personally feel that Rhode Island is a better state, and America is a better country, when we are as inclusive as possible.”

Moving forward, organizations that had been dedicated to marriage equality will be shifting their goals. For instance, Rhode Islanders United for Marriage will now be working as a resource for those who have questions about the process, timing and implementation of the marriage law on August 1.

“I am in complete support of the RI decision to pass same-sex marriage,” said Sam Peterson, a 20-year-old from Newport, RI. “[Same-sex couples] should have equal standing in society. Personally, I look forward to when same-sex marriage is an integrated part of society and no longer has to be a story that is when real progress will be evident.”

For more information about getting married in Rhode Island, visit www.riunited.org.