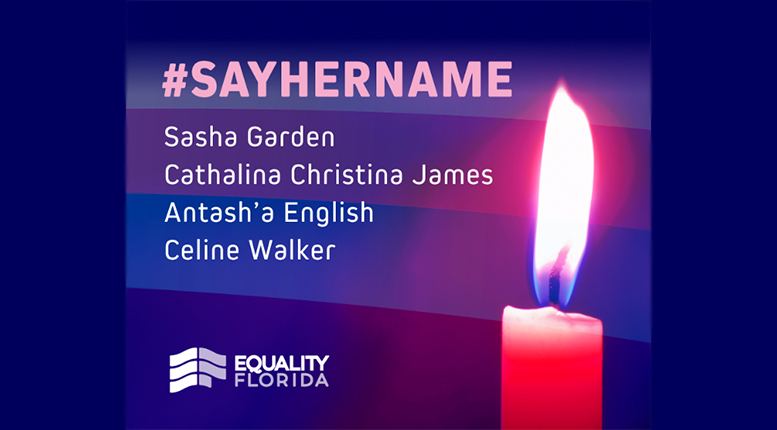 ORLANDO, FLA.—Yesterday, Equality Florida and GLAAD mourn the death of Sasha Garden, a transgender woman of color murdered in Orlando on Thursday, July 19. Sasha is the fourth known transgender woman of color brutally murdered in Florida this year. Earlier this year, Celine Walker, Antash’a English, and Cathalina Christina James were murdered in the city of Jacksonville.
​
The increase in hostility and violence directed against the transgender and gender non-conforming communities is horrific and unacceptable. A report by the National Coalition of Anti-Violence Programs shows an alarming rise of hate-violence against transgender and gender non-conforming people, especially among transgender women of color.

“As we mourn for the victims of these horrific murders, and denounce the pervasive violence against our trans siblings, we adamantly call on the media and law enforcement to get this right,” said Gina Duncan, Equality Florida’s Director of Transgender Equality. “We, as a society, should be well past misgendering transgender people. There are national resources that address these issues. In 2018, the misgendering of a transgender victim is an overt act of bigotry and at best, an act of ignorance and neglect. Proper policy, protocol and practice in ways to engage the transgender community are readily available. To do otherwise, makes law enforcement and the media complicit in the marginalization of our transgender community.”

National organizations such as GLAAD and the Human Rights Campaign have published policies addressing the proper way to report and investigate murders of transgender Americans.

“Transgender people, especially transgender women of color, are disproportionately affected by hate violence. The tragedy of these incidents is compounded when reporting misgenders the person in death, disrespecting their true identity,” said Nick Adams, Director of Transgender Media & Representation at GLAAD. “As we mourn the deaths of four trans women of color in Orlando and Jacksonville, GLAAD and Equality Florida are calling on the media and law enforcement to report accurately and respectfully on these trans lives cut short by violence.”

GLAAD’s vital reporting guide, Doubly Victimized: Reporting on Transgender Victims of Crime, provides clear guidelines to ensure that transgender victims of violent crimes are treated respectfully and fairly. GLAAD’s new report More Than a Number: Shifting the Media Narrative on Transgender Homicides, is an advanced reporting guide for journalists and advocates to accompany our Doubly Victimized Guide. Equality Florida and GLAAD also published Southern Stories: A Guide for Reporting on LGBTQ People in Florida, an important regional resource for journalists and reporters telling the stories of LGBTQ people living in Florida.

GLAAD rewrites the script for LGBTQ acceptance. As a dynamic media force, GLAAD tackles tough issues to shape the narrative and provoke dialogue that leads to cultural change. GLAAD protects all that has been accomplished and creates a world where everyone can live the life they love. For more information, please visit www.glaad.org.