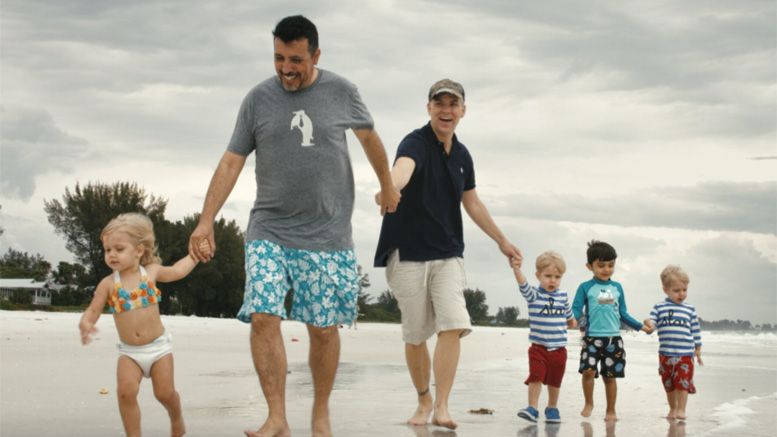 Underwritten by Bristol-Meyers Squibb, Wells Fargo, and the National Gay & Lesbian Chamber of Commerce, Families Like Yours showcases through candid interviews the challenges of raising an LGBT family in America

Over network TV? Tired of Hulu? Seen everything on Netflix? Dig a little deeper to find meaningful and surprisingly well-executed LGBT films making the festival rounds this fall.

A documentary detailing the homosexual witch hunt sanctioned by the U.S. government in the 1950s (made possible by then-Senator Joseph McCarthy’s anti-communism campaign), The Lavendar Scare – which has been in production since at least 2013, but only released last year – follows several subjects, including lifelong LGBT activist Frank Kemeny, as they tell their harrowing stories of humiliation, blackmail, and dismissal of civil service for what amounts to nothing more than keeping their private lives private. This eye-opening doc is still making the rounds – recently winning awards at film fests in Atlantic City; Fargo, North Dakota; Hartford, Connecticut; Kansas City; and Memphis – but you may find it among the screenings at an art-house theater or LGBT film festival near you. If not, call your local indie joint and request it.

You might not expect one of the most progressive trans films ever made to emerge from Japan – especially considering that’s it’s the first trans film to come from the country ever – but it makes sense for Close-Knit, a surprising narrative that focuses on the beating heart of a blended-by-circumstance family. The film takes issue with the trans plot line as an aside, welcomingly, and rather pays attention to the bond formed between a young girl and her uncle’s male-to-female partner during the absence of her oft-missing mother. The film, directed by Naoko Ogigami, took home the top prize at the Far East Film Festival in Udine, Italy; Best Narrative Feature at the Tel Aviv International LGBT Film Festival; and the Teddy Jury Award at the Berlin International Film Festival.

Underwritten by Bristol-Meyers Squibb, Wells Fargo, and the National Gay & Lesbian Chamber of Commerce, Families Like Yours showcases through candid interviews the challenges of raising an LGBT family in America—which, for all intents and purposes, is not unlike raising a “traditional” family in America (the whole point of this documentary) – as it introduces us to the LGBT men and women called mommy and daddy by their children, including out actor Denis O’Hare, husband Hugo Redwood and adopted son Declan. The film recently screened at Fort Lauderdale’s OUTshine Film Festival, following its July premiere in New York City presented by Deutsche Bank.

There’s a lot to like about Britain’s God’s Own Country – before you even sit down to watch it. If its Sundance Film Festival cred doesn’t attract you – it was the only UK-based movie to feature in the world drama category at this year’s event – perhaps its 98-percent approval rating on Rotten Tomatoes will do the trick. Drawing comparison to Brokeback Mountain (which, admittedly, is an easy association for our community for any material portraying rough sex in a rural setting between two partners who don’t consider themselves “gay”), God’s Own Country at least does right where that Best Picture Oscar nominee broke our hearts by pursuing a happy ending. Even if that is relative nowadays.

Artist and ACT UP activist Sam (Alan Cumming), who lived through the early years of the HIV/AIDS crisis, is disillusioned by Millennials’ seeming disregard for the disease as they solicit casual sex through social media with seemingly no regard for the consequences while simultaneously resting on their political laurels at a time when activism is quite necessary. But just when Sam thinks there’s no hope for our LGBT future in the hands of 20-somethings, along comes young, pretty Braeden to revive his cold, dead heart (figuratively, of course). IndieWire’s Jude Dry calls it “one of the most exciting queer films of 2017 so far.” Doubling down on that sentiment, Los Angeles Blade’s John Paul King says, “After Louie may well be the most important gay movie you see in your lifetime.”

Long-estranged brothers Billy and Joe reconnect during a road trip back to their native Texas to be by their dying father’s side. The sibs haven’t seen each other in a while because after Billy was discharged from the Army, he beat feet to Los Angeles, the reason for which plays out over the long ride home (though you’ve probably already guessed why). Directed and written by and starring Paddy Quinn, High-Low Forty won Best Narrative Feature at this year’s GI Film Festival in San Diego.

Iceland – if you’re not aware – has a solid track record for producing attention-commanding queer films (if you haven’t found Heartstone yet, track it down), and Rift is no exception. This thriller/horror-mystery finds ex-boyfriends Gunnar and Einar holed up together in BFI (that’s Bumfuck, Iceland for the uninitiated) haunted by their past and a few bumps in the night. The film won the Artistic Vision Award at L.A. Outfest 2017 and is scheduled for limited theatrical release on Nov. 21.