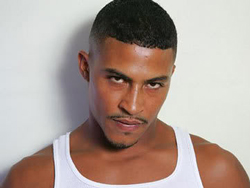 BOSTON, Mass.—Is the city of Boston ready for a weekend with Tiger Tyson?

Residents will have the chance to answer that question when the Hispanic Black Gay Coalition hosts two events on the weekend of April 20th that put the spotlight on the internationally revered, diminutive performer with the rather large appendage.

‘Confessions’ is Hardy’s first dramatic work as a playwright. The idea for the play came to him as he was interviewing Tyson. “I kept thinking: ‘This material would be so ripe for the stage.’ We’ve heard the basics of Tiger’s story before–boy from the hood, raised by a single mother, high school dropout, drug dealer, jail bird. But he parlayed that thug life past into a unique, marketable image and created his own multi-million dollar studio [Pitbull Productions]. That’s a classic rags-to-riches tale, the American Dream come true.”

With Tyson’s permission, Hardy drafted a script in late 2009 and the play made its debut in front of a sold-out crowd during New York’s Downtown Urban Theater Festival in April 2010, earning their coveted Best Short Prize. Because of the buzz created, it returned for two more sold-out shows at Whyte Hall on Fire Island in August, then successful runs at the Roy Arias Theater in New York and Lace Lounge & Nightclub in D.C. in March and May of last year, respectively.

As to why the play has been so popular, Hardy observes: “No question, Tiger has a lot of fans. And there is still an air of mystery that surrounds him; folks really don’t know much about the man behind the persona. Quite a few surprises about him are revealed [in the play]. “

But, Hardy adds, the star attraction is the actor portraying Tyson, Johnathan Cedano. After auditioning dozens of young men, Cedano was offered the part with Tyson’s blessing. Born in the Dominican Republic, Cedano has received unanimous praise for the role, including a very enthusiastic rave from D.C.’s African-American Collective Theater (ACT) Director Alan Sharpe: “From the moment [the] talented [Johnathan] Cedano made his entrance–wearing only a baseball cap, a pair of Timbs and a small white towel that left absolutely nothing to the imagination–he had the audience in the palm of his hand … and most of us wishing it was vice versa.”

Hardy agrees with Sharpe: “Johnathan brilliantly channels Tiger without imitating him. And because he [Tiger] is such a larger-than-life figure, that’s not an easy thing to pull off.”

Cedano views stepping into Tyson’s Timbs as an opportunity of a lifetime. “There aren’t many leading roles out there for men of color, especially one with such dimension. And it’s pretty intimidating seeing the person you’re playing out in the audience! I’m just glad Tiger feels I am doing him justice.”

While Tyson himself won’t be at the performance on the 20th, he will be participating in a panel discussion the next day entitled “The Raw Reality: Pornography & Black and Latino Representation.” The forum is also hosted by the Hispanic Black Gay Coalition.

Following the panel discussion, audience members will be encouraged to get involved in a number of safer sex, HIV prevention, and anti-homophobia campaigns spearheaded by HBGC and other agencies in the Boston area.

“The weekend of events serves to get our community talking about sex and sexuality in a way that promotes self-love, healthy relationships, and community empowerment,” said Corey Yarbrough, Executive Director of HBGC.