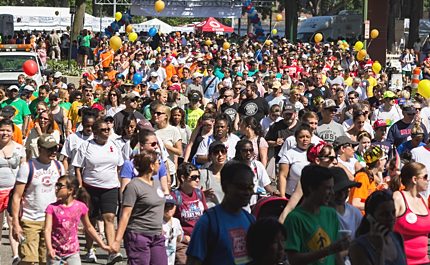 Over 10,000 people came together on Sunday, June 2, to participate in the AIDS Walk, a fundraiser for the AIDS Action Committee of Massachusetts.
© 2013 Marilyn Humphries

Over 10,000 people came together on Sunday, June 2, to participate in the AIDS Walk, a fundraiser for the AIDS Action Committee of Massachusetts.
© 2013 Marilyn Humphries

BOSTON, Mass.—The AIDS Action Committee of Massachusetts (AAC) announced today that it is confident that it will meet its fundraising goal of $1 million from this weekend’s 28th AIDS Walk Boston & 5k Run. There was a strong turnout of more than 10,000 walkers for AIDS Walk Boston and 700 runners for the Athleta 5K Run. The annual AIDS Walk & 5K Run is the largest event held in New England to raise public awareness of the ongoing need for outreach, education, and prevention efforts to halt the spread of HIV/AIDS. [pullquote]In his opening remarks to AIDS Walk & 5K run participants, U.S. Congressman Joe Kennedy stressed the need to continue efforts to end HIV/AIDS.[/pullquote]

Money raised from the AIDS Walk & 5K Run supports the services provided by AIDS Action to people living with and impacted by HIV/AIDS. These funds have become increasingly critical to support HIV/AIDS services and prevention efforts as public funding for HIV/AIDS programs and services continues to decline. State funding for HIV services has been cut by 38 percent over the last 10 years. During the same period, the number of people living with HIV in Massachusetts has increased 44 percent.

“We are so grateful to our walkers, runners and hundreds of volunteers, many of whom contribute each year, who make this event so successful. Their efforts ensure that those most vulnerable in our community will have access to the vital services and support that they need. Since 1999, these services have helped reduced the number of new HIV infections in the state by 53 percent, which will save the state more than $2 billion in health care costs,” said Rebecca Haag, President & CEO of AAC. “We also want to remind people that there is still time to donate online or through the mail to help us reach our goal. This money is vital to funding our policy work, client services, and outreach and prevention—all of which is needed to prevent the spread of HIV and AIDS.”

FACTS ABOUT AIDS IN MASSACHUSETTS

The AIDS Walk was first held in 1986 and is one of the first walks to be introduced in Boston, as well as the country. The 5K run was added to open up fundraising to runners. Historically AAC’s largest fundraising event, it has raised nearly $39 million for programs and services to support those living with and at risk for contracting HIV/AIDS.