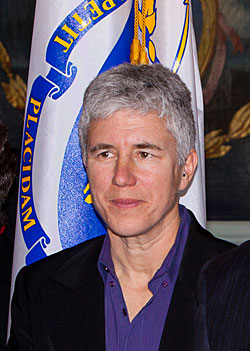 BOSTON, Mass.—The leader of the nation’s largest LGBT organization offered an apology to the transgender community at the same time he said the group would take a lead in advocating for fully comprehensive federal LGBT civil rights legislation.

“I want to cut right to the chase here today,” said Human Rights Campaign (HRC) President Chad Griffin in Atlanta in early September, addressing several hundred people at the annual Southern Comfort conference, a major gathering for transgender people. “There’s an elephant in this room, and, well, it’s me.”

“So I am here today, at Southern Comfort, to deliver a message … HRC has done wrong by the transgender community in the past, and I am here to formally apologize,” said Griffin.

As he explained, “I am sorry for the times when we stood apart when we should have been standing together. Even more than that, I am sorry for the times you have been underrepresented or unrepresented by this organization. What happens to trans people is absolutely central to the LGBT struggle. And as the nation’s largest LGBT civil rights organization, HRC has a responsibility to do that struggle justice, or else we are failing at our fundamental mission.” [pullquote]“So I am here today, at Southern Comfort, to deliver a message … HRC has done wrong by the transgender community in the past, and I am here to formally apologize,” said Griffin.[/pullquote]

Griffin’s speech also decried violence against transgender people, calling it a “national crisis.” He listed a number of ways HRC is working toward transgender equality in the workplace and toward raising the visibility of transgender persons through storytelling. Griffin asked that both he and HRC be held “accountable.”

He reaffirmed that HRC would continue to press for a fully inclusive Employment Non-Discrimination Act (ENDA), which would ban workplace bias on the basis of sexual orientation and gender identity. He also pledged support for broader protections.

In the next Congress, he said, “HRC will lead the campaign for a fully-inclusive, comprehensive, LGBT civil rights bill. A bill with non-discrimination protections that don’t stop at employment, but that finally touch every aspect of our lives—from housing, to public accommodations, to credit, to federal funding, to the education we all need to succeed and thrive.”

“And I’m going to keep being honest with you, this is not going to be an easy fight,” said Griffin.

HRC posted the text of Griffin’s speech on the organization’s blog, which can be found here.

HRC has long had a fraught relationship with the transgender community. Former leader Elizabeth Birch made some progress when in 2003 the organization added the “T” to its goals and ostensibly included the entire LGBT community. But HRC has regularly been criticized for not reaching out to trans groups and not having many trans people on its board. Currently HRC has at least one trans-identified board member, Meghan Stabler of Dallas.

In addressing Southern Comfort, Griffin aimed to heal the most recent rift between HRC and the transgender community, which dates back to 2007. That year Joe Solmonese, then HRC president, told Southern Comfort attendees that the organization would advocate federal employment protections, fully inclusive of sexual orientation and gender identity. However, when former Representative Barney Frank (D-Mass.) said that ENDA with gender identity provisions would not pass in Congress, HRC followed his lead and supported a measure inclusive only of protections for sexual orientation. Many transgender people reported feeling betrayed by HRC’s backing of Frank, and a divide ensued.

More recently, while ENDA passed the Senate November 7, 2013 by a 64-32 vote, marking the first time that legislative body approved federal civil rights legislation banning anti-LGBT employment bias, House Speaker John Boehner (R-Ohio) has said repeatedly that he would not bring ENDA to a vote, claiming the legislation is unnecessary and would lead to frivolous litigation. Meanwhile, a growing number of national and statewide LGBT organizations have come out against ENDA, saying that while it bans workplace discrimination on the basis of sexual orientation and gender identity, the federal law also would allow religious organizations to discriminate against LGBTs even in non-ministerial or pastoral capacities.

Recently U.S. Rep. Jared Polis (D-Colorado) filed a discharge petition with the House of Representatives clerk’s office, which would force a vote on ENDA but with a narrower religious exemption in accordance with Title VII of the Civil Rights Act, the same as those exemptions with respect to discrimination based on race, color, sex and national origin.

National and local leaders said they are heartened by Griffin and HRC’s reconciliatory outreach.

“I think it was very productive for HRC President Chad Griffin to so clearly and specifically apologize for times when HRC did not step forward to fully and fairly include the transgender community within its advocacy,” Levi said. “I am ever optimistic about the possibility of securing wide ranging legal protections for the community and know we are stronger when we are unified than when we are divided. I am hopeful that his apology will heal some remaining open wounds. So much work has already been accomplished by our united community, yet much remains to be done. It is great to hear Chad say that HRC is 100 percent committed to advocating for the transgender community.”

One national trans leader said the apology was “overdue.” Masen Davis, executive director of the Oakland, California-based Transgender Law Center (TLC), said that he was “very impressed by the content and what seemed to be the spirit behind the speech at Southern Comfort,” even though “it was in many ways long overdue to approach the transgender community and apologize for what happened in 2007.”

“While that debacle did not happen on Chad’s leadership, I thought it was an important step forward to acknowledge it and pledge to work differently with the transgender community,” Davis added.

With respect to ENDA, Davis said TLC is supportive of  “any effort to secure strong [employment] non-discrimination protections for LGBT people at the federal level” provided that the protections “are strong and that they stand the test of time and protect all members of our community, including those who work for religious institutions.”

“I am a big believer that we have an important responsibility to ensure that our communities get the protections that they need,” Davis said. “Obviously, employment is so critical, but employment is just one of the many areas that we need to make sure our people are protected.”

“All areas of life where LGBT people run into challenges and to the extent that the federal government has any jurisdiction,” he said.

Davis acknowledged that it would likely take time before a broader LGBT civil rights law is passed in Congress.