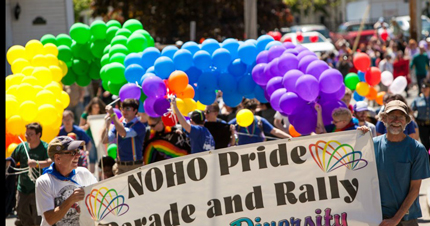 Noho Pride Anniversary on May 12th. Photo by TRT/Glenn Koetzner.

Noho Pride Anniversary on May 12th. Photo by TRT/Glenn Koetzner.

The 31st annual LGBT Pride Parade was held in downtown Northampton, Mass on May 12th. This year the parade route began at Hampton Avenue and ended at the Three-County Fairgrounds. (Comprehensive TRT Photo coverage can be found at:  http://on.fb.me/KuNPCU)

“The march and rally have grown significantly,” explained J.M. Sorrell, a 2012 Noho Pride spokesperson, in an e-mail. “The Three-County Fairgrounds offered much more space, and the price was reasonable. In keeping with the spirit of the LGBT Pride events, we still had a large, visible presence downtown since we started the march there.”

Northampton Police Detective Sergeant Anne McMahon was on duty during the event, and estimated that the crowd was between 7,000 and 8,000 people.

“This year, the entire length had people on both sides all the way down to the fairgrounds. Once the parade ended there [were] easily a good 1,500 to 2,000 people that went into these grounds,” said McMahon, who was surprised by the large following after the march ended.

Marchers began trekking the sunny 1.1-mile route Saturday at noon. The participants represented a variety of organizations, such as the Classy Old Dykes, Expandable Brass Band, PFLAG (Parents, Families, & Friends of Lesbians and Gays), Raging Grannies and many more.

“I really liked seeing all the churches coming together and saying that they support us queers. That was really great,” said 19-year-old Nathan Pehl of Lincoln, Mass. “I would love to participate in the parade one day.”

The parade took place only three days after President Barack Obama announced his support of marriage equality. The future of LGBT rights was fresh in participants’ minds as groups carried signs emblazoned with slogans in support of civil liberties.
“We’ve been raised not judging openly gay couples and the weird thing to me is going to other places where it’s not accepted. To me it just feels normal,” said Rain Drooker, an 8th grader at JFK Middle School in Northampton.

Throughout the crowd were many discussions of how marriage equality could be heavily influenced by such opinions of young people.

“I like to see the youth out. Where I’m from we don’t have stuff like this where it’s really out, open and comfortable. So being somewhere that I can be myself and be with my wife is great,” said Julie Smith, who currently lives in Hartford, Conn., but grew up in West Virginia.

Twenty-four-year-old Northampton native Anna Feldman appreciated the enthusiasm of Saturday’s crowd, but expressed her yearning for stronger movements in other parts of the country.

“Having [the parade] be visible for people is important, but I also really wish that this was happening in places that really, really needed it, like North Carolina for example. If [only] this could happen across the country and across the world.”

When the parade came to an end, participants and spectators alike gathered at the fairgrounds to participate in pride events hosted by Noho Pride. Speakers and entertainers included Northampton Mayor David Narkewicz, speaker Elizabeth Warren, the Pioneer Valley Gay Men’s Chorus and many more. Many booths and vendors were present, giving out information about groups that participated in the parade, as well as several others.

“With so much work to get accomplished, it is key that volunteers cooperate for the greater good. As the big day approaches, the energy intensifies, so that can-do person with a positive temperament is the ideal volunteer,” said Sorrell.

According to the organization’s website, its efforts are run by volunteers. As such, Noho Pride (formerly known as Northampton Pride) is already looking for people to get involved for the 2013 march and rally. The best way to reach out is by visiting www.nohopride.org.