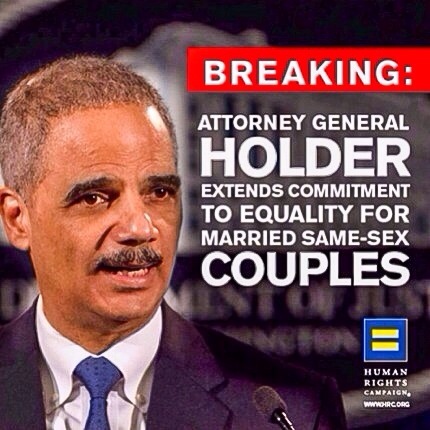 In his remarks, the Attorney General said: “In every courthouse, in every proceeding and in every place where a member of the Department of Justice stands on behalf of the United States, they will strive to ensure that same-sex marriages receive the same privileges, protections and rights as opposite-sex marriages.”

The changes will mean that the federal government will treat married lesbian and gay couples the same as heterosexual couples when they do things like file for bankruptcy, testify in court or visit family in prison.

“This landmark announcement will change the lives of countless committed gay and lesbian couples for the better. While the immediate effect of these policy decisions is that all married gay couples will be treated equally under the law, the long-term effects are more profound. Today, our nation moves closer toward its ideals of equality and fairness for all. Attorney General Holder continues to show incredible leadership, and this latest action cements his place in history alongside Robert F. Kennedy, another Attorney General who crusaded for civil rights.”

Holder has a long history of support for the LGBT community. Following last year’s historic ruling by the Supreme Court in the case Windsor v. U.S, Holder called for equal protection and equal treatment for same-sex couples.And as U.S. Attorney for the District of Columbia, he formed the first hate crimes task force, which has become a model for U.S. Attorneys throughout the country.