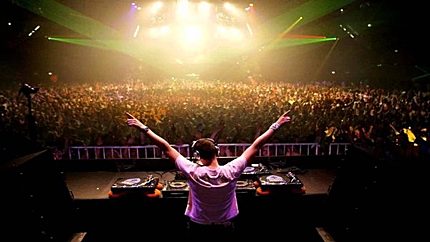 By: Jimmy Newsum/Special to TRT—

A chill may be in the air but gay clubs show no sign of cooling down. DJs and remixers are working overtime to keep the dark confines and pulsing rhythms of their rooms hot and sweaty. Here are the top scorchers being played on dance floors this fall.

The follow up to the rebel anthem “Bad”, Vassy’s collaboration with David Guetta, is already climbing up the dance charts. It recently claimed the #1 spot on Beatport, and for good reason. It’s another beat banger with a crazy fun hook. Hustlin’ pays homage to Crystal Waters and was inspired by her 1991 smash, “Gypsy Woman.” Waters even appears in the song’s music video. “Hustlin’” expertly redefines the track for the modern dance floor.

From the album, Till Death Do Us Party
Two of the fiercest queens on the planet come together in this rowdy, bold, hip-hop inspired proclamation track. In it, the wild child of drag (Delano) and the alien queen (Thunderf@#k) flip-the-bird at any and all who disrespect them for their unconventionality. They like the way they look, thank you very much. Listen to their track and you’ll like the way they sound, too.

The third single from house stunner Frankie grabbed the #1 spot on the Billboard club play chart in its first week. The reason? Simple. “Forever” is a great dance song with quality vocals and music. Co-written by Ralphi Rosario and three-time nominated lyricist Pamela Phillips-Oland, the song incorporates elements of late 70s classic disco to build a feel-good track that forces clubbers off their ass and onto the dance floor. Remixes by Ralphi Rosario, Twisted Dee, Reid Stefan, Majik Boys and Jeff Barringer.

Kristine W
From the album, New & Number Ones (Fly Again)
Kristine’s label conducted a poll on Facebook this summer, asking fans to choose the third release from the queen of club’s studio album. The overwhelming majority smartly chose “Love Come Home”, Kristine’s spiritual track about embracing change. Like most of the songs on New & Number Ones, this latest can be interpreted in multiple ways. It can be about the end of a relationship or the return of military from service or about loving oneself, because only when love comes home to live in your heart are you able to give that love to someone else. OK, that’s schmaltzy but this latest from our favorite dance floor diva is not. Part 1 remixes by Todd Terry, Subgroover, Phill Wellz, Andy Sikorski and Hermanos Inglesos.

“Sweat”
XELLE
The latest track from the girl group best known for throwing an illegal dance party on a moving NYC subway train is a little bit dirty, a tad naughty, and a whole lot of fun. Written by Zach Adam and Lisa Greene (who has penned hits for Britney Spears and Kylie Minogue), the megapop track has high-energy vocals, a danceable beat and powerful synth rhythms. It’s sassy, frolicsome, colorful and slightly off-the-wall. Perfect for the treadmill. Now, work bit@hes.

“Take It All The Way”

The two-time Grammy nominated DJ-producer serves it up New York style with his latest track, a sweeping blend of hard house and epic grooves, guaranteed to wake up even the most jaded club music fan. However, if you’re expecting the thumping tribal beat sound that has been Moran’s staple for years, it’s not here. “Take It All The Way” is more an experimental offering with Moran seeming to stick one toe into the EDM pool. It’s as phenomenal as his previous works and likely to be the first of many similar tracks. Spoiler alert: Tony Moran provides the lead vocals and yes, he sings as fiercely as he spins!

The latest track from the high-energy queer electro-hop duo of davO and Krylon Superstar is being referred to as Future-Twerk.  Written by davO and Future People members Chris Cosgrove and Dan Marcellous, the song is an urban duet, heavily inspired by the bounce music of New Orleans but with a more indie, melodic, pop feel. The music video (directed by JB Ghuman) has been getting a lot of attention as it stars the most colorful and fashionable freak on the planet, Kelly Osborne.

Dance newcomer Shara Strand aims to solidify herself as a powerhouse anthem artist in this, her latest release from D1. The dance floor-ready track is fun and fresh with a dash of sexy. Executively produced by Peter McLean with additional production by Keith Kemper, the song celebrates the animal nature of clubbers as they prowl the club for prey. It’s much groovier than anything Shara has recorded previously and the Dave Aude mix, in particular, will open her to a larger audience.

“Take My Breath Away”
Sylvia Tosun
(Sea To Sun)
The EDM remake of the ’80s classic from Top Gun reflects on the joyful, visceral feeling of the world’s beauty that exists all around us. What makes Tosun’s version more captivating than all previous covers of the track is the extraordinary production by Bimbo Jones. Those four-note keyboard figures, suspended placidly over synth beds, give the song a calm, weightless feel. It conjures up a sense that love is a dream state, a suspension of time. The value of Tosun’s “Take My Breath Away” isn’t in its weight but in its stillness.

Are you longing for the days of Amber when tracks like “Sexual (Li da Di)” and “Above The Clouds” ruled the dance floor? We’ve found the next best thing in EDM’s newest princess, Ashley J. Her debut track has the propulsive, soulful dance-pop sound of the former club sensation. It’s whimsical and dreamy (like Amber) with a great beat behind it (like Amber) that makes it super fun and easy to dance to (like Amber). Plus, the single has some serious music muscle working for it. It was written by Rick Nowels (writer of Lana Del Rey’s “Summertime Sadness”) and Billy Steinberg (writer of Demi Lovato’s “Give Your Heart A Break”) and has incredible remixes by DJ Yiannis, Reid Stefan and Sted-E & Hybrid Heights.