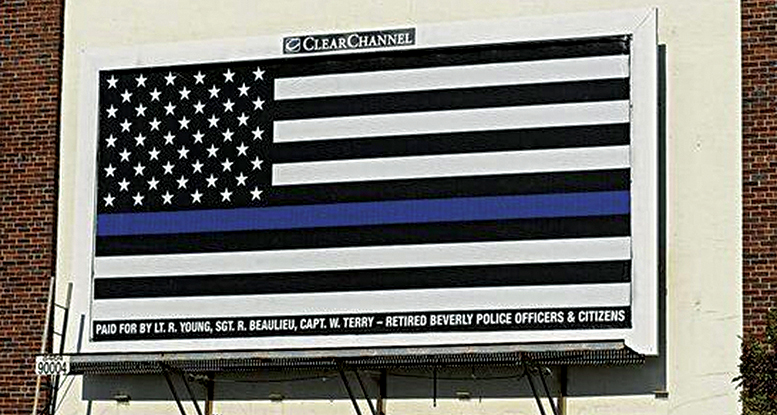 Although A seemingly inclusive city, Beverly Seems to Have Missed the Mark on Billboard’s Message and its Meaning to BIPOC and LGBTQ+PoC people

BEVERLY, Mass.—As protests continue to erupt around the county, still demanding an end to police abuse and brutality, a billboard depicting a “Blue Lives Matter,” flag was prominently displayed in the small city—a symbol to the black community and other marginalized groups that not all are welcome.

“The message that this billboard gives to Beverly residents is that our community does not support or stand for unity,” said Caja Johnson, Beverly Human Rights Committee Chair. “With widespread support for the Beverly Police Department, the presence [and intent] of the billboard is unclear. The billboard promotes violence while diminishing the peaceful voices of our citizenry. The Black community comes without an association or a union, but with a history of oppression and a skin color that will forever be the same. When will we be enough to be heard without a struggle and [an] in-depth explanation?”

According to Beverly Mayor Michael P. Cahill, the billboard was co-sponsored by three retired members of the Beverly Police Department.

“It is my understanding that there are members of our police community (family members, retired and current officers) who feel strongly that to them this flag symbolizes respect for their members, past and present, including respecting the memory of deceased former police officers,” Cahill said. “They assert that this flag only means respect for police, and that anyone who has or would co-opt this flag for other purposes does not represent them.”

Yet, over the past years, and especially recently, the thin blue line flag has been co-opted by those, often of white nationalist ideology, to represent the counter-movement to Black Lives Matter (BLM).

“While we understand that officers may perceive the billboard as a symbol of solidarity, unfortunately, the thin blue line flag has been co-opted by white supremacists—which was exhibited at the rally in Charlottesville—and has become a symbol of opposition to Black Lives Matter,” Johnson explained. “Why is the billboard visible now when the BIPOC (Black, Indigenous, and People of Color) community needs support and acceptance?”

Abu Toppin, a Beverly Human Rights Committee member said that the timing of the billboard appears to be intentional, despite positive strides having been made between the police and community.

“This was definitely not the right time or place for the billboard … But, I believe that is the point of the billboard,” said Toppin. “It’s designed to counter the BLM message and to ensure a division or separation between police and BIPOC. There is never a right time to send that kind of message to a community looking for a change in how BIPOC are viewed, treated and valued. Especially considering the promising conversations that have happened between the police and members of the community, who are jointly seeking to make our community better.”

Toppin said that open dialogue about this symbol and its implication to the BIPOC community and others that are fighting for justice is critical.

“I think you have to have conversations with those who this symbol is supposed to represent,” said Toppin. “Having open conversations helps to defeat blind devotion or ignorance because when faced with education or knowledge, one did not previously have, it becomes a conscious effort to then discard that information, and continue with ignorance or hate.”

The mayor, who flew the BLM flag at City Hall for a month over the summer, seeks compromise and widespread education in an effort to break down existing barriers.

“We have members of our communities of color and particularly Black residents, who feel this flag symbolizes that they are not welcome or valued in Beverly and for whom this flag causes pain,” Cahill said. “For this reason, I have asked whether there is another way than this symbol to support our law enforcement community and to respect the memory of those deceased members. Our BIPOC neighbors, friends, and family do need to know that you are welcome and valued in Beverly. I am committed that we will engage in the conversations and do the work together that this divide illustrates is needed.”

However, Johnson questions the appropriateness of displaying the billboard at all as tensions surge through the country, and BLM protests call for an end to police brutality against the Black community.

“There was a Beverly Police officer shot and wounded in 2012—this was an example of a time when we would expect to participate in bold and vocal support for law enforcement,” Johnson explained. “In instances similar, it would serve as an opportunity to show police support by using the National Law Enforcement Officers Memorial flag.”

The blue line flag, a symbol within law enforcement to honor police officers has morphed into a racist symbol for many, deviating from its original purpose. Deviation of symbols is not uncommon, Toppin said.

“I believe right-wing or white supremacists groups have always looked for or used/appropriated symbols or messages to spread their message of hate,” said Toppin. “The swastika was not originally a symbol for the Nazi’s but was a symbol of divinity and spirituality used in Indian culture. The idea of turning something peaceful in nature into something that can be viewed as a symbol of fear or hatred is the end game.”

Johnson said that regardless of the original purpose, the flag should not be used to persecute others.

“This flag supports law enforcement, but doesn’t promote polarization, panic, and terror,” said Johnson. “I know that’s not the message our Beverly Police Department Chief wants to send to BIPOC communities and individuals coming across the bridge into our city.”

The contentious billboard has not only affected those living in Beverly but others that cross the bridge into the city for business, school, or enjoyment and are greeted with the controversial message.

“I was disgusted to see the thin Blue Lives Matter billboard as I was crossing over from Salem,” said Daryl McIntyre, a newly established Salem resident. “It made me question whether my partner and I made the right choice to move to this area. I’ve always loved the north shore, but living here now makes me realize how regressive the area can be. At least, those were my initial thoughts when I saw it.”

Toppin explained how the billboard not only counters the Black Lives Matter movement, but it also undermines the experiences BIPOC people have with law enforcement.

“The billboard looks to not only counter the message of the BLM movement, it also looks to further the separation of the police and people of color,” Toppin said. “As if to say, people of color are the real perpetrators here because we’re the ones that are killing police and/or stripping the police of their resources (i.e. defunding the police). The billboard sends the message of ignoring the BLM movement and that the police are the real victims.”

More to do for the BIPOC Community

According to Cahill, he understands the necessary work to be done by the city to bring equitable justice.

“We have committed to meaningful action to address systemic racism and to deliver here in Beverly on America’s promise of racial justice and equity in opportunities for all our residents,” said Cahill. “We have started the community conversation and are committed to making this journey together.”

To accomplish that goal, Cahill said he is moving forward with a “Racial Justice and Equity Initiative” first proposed this past June.

Additionally, the city has launched a Race Equity Task Force, which will allow the space for the kind of work and conversation that needs to happen to take proactive steps the mayor said.

“I respect the Mayor, appreciate his initiatives, and his recent efforts, Johnson said. “ … Beverly can represent cohesion or it can be what is right now. I am advocating for love/unity as opposed to majority/power. With a division as extensive as this one, there is a calling for an immediate, strong, bold stance from leadership.”