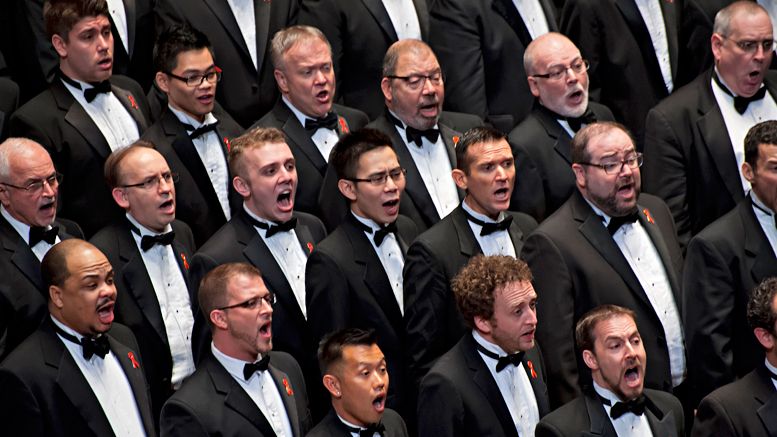 The BGMC Continues to delight audiences this Holiday Season

After all these years, the Boston Gay Men’s Chorus’s (BGMC) annual holiday concert is as much of a local tradition as the Boston Common tree lighting ceremony or the National Center of Afro-American Artists’ production of “Black Nativity.” The difference is that BGMC never works from the same script. Where last year’s concert showcased new commissions and seasonal parodies of Broadway tunes (i.e. “If I Were A Gentile” and “Pink Christmas”), this year’s show, Jingle All the Way, features more classic fare―with BGMC’s signature flair. Think “We Three Kings” with jazz hands.

“This is a very traditional holiday this year, but it will be seen through fresh eyes,” says BGMC Musical Director Reuben Reynolds. Read on for more of Reynolds’ take on Jingle All the Way.

Q: Let’s start with the set “Three More Jazz Carols.” These selections aren’t what we normally think of when we think about jazz musicians covering Christmas tunes. I mean, “Personent hodie” is a Medieval Latin carol!

A: No, we’re not doing your typical holiday jazz covers―we love a good plot twist in our performances. We have a group of Christmas songs―“We Three Kings,” “In the Bleak Midwinter,” and “Personent hodie” that have been set by composer Will Todd in a jazz idiom. He originally arranged them for the choir of St. Martin-in-the-Fields in London. I’ve known Will forever. He’s a wonderful English composer who actually did an opera at the Boston Conservatory a couple of years ago and I was the conductor. So I called Will and said, “These are fantastic. Would you mind if I redid them for male voices?” And he was thrilled to have us do them. It’s wonderful music. In fact, Chad Weirick, our piano accompanist who does most of our arrangements, told me last night at rehearsal that these are some of his favorite holiday songs that we’ve ever done.

Q: Are there other non-traditional renditions of traditional holiday songs in the show?

A: We have a new piece that we commissioned by Ola Gjeilo, a Norwegian composer, and it’s called “Evening Prayer.” It’s a prayer written by St. Augustine in an absolutely stunning setting that uses a tenor saxophone as a soloist. So, we’re exploring different contemporary ways of hearing traditional songs this year. It’s an absolutely gorgeous and moving piece. It’s one of the few pieces that the chorus has fallen in love with instantly. It’s just so lush and gorgeous to sing.

We’re also going to perform a piece called, “Betelehemu,” an African carol by Via Olatunji, that features African drumming. It’s is a nod to our South African tour in 2018.

Q: How will you handle the old holiday chestnuts we all know and love?

A: Of course we have traditional holiday tunes like “Deck the Halls,” “The First Noel,” “Joy to the World”―the songs that everyone wants to hear. We also have a group of what I call “swing carols”―we’re using the saxophone a lot in this show. So we’ll be doing “Cool Yule,” “Hot Hanukkah,” “Silver and Gold,” and Kay Thompson’s version of “Jingle Bells.” Kay Thompson, by the way, was a well-known arranger for MGM in the 1940s. In fact, she was a good friend of Judy Garland and she wound up being Liza Minnelli’s voice teacher. So this is all jazzy, it’s all dance.

Q: Will you be singing any newer, more contemporary material?

A: We have another new piece, “The Work of Christmas Begins” by Steve Huffines. It tells the story of how the real work of Christmas happens after Christmas, when we go out and try to actually do things to change the world. And then we have an absolutely stunning arrangement by a young composer, Craig Hella Johnson, who is from from Texas, where he superimposes the Christmas carol “Lo, How a Rose E’er Blooming,” with the Bette Midler song “The Rose.” It alternates verses from the songs and it’s stunning how each song comments on the other and brings it alive. So, once again, what we’re doing is looking at traditional songs in a new way; things that will really open your eyes, yet you’ll hear those traditional melodies that you love to hear at the holidays.

Q: Where in the show do you really gay up the festivities? You do that so well, after all.

A: Yes, there’s always the fun stuff. This year we’ve actually managed to find a Christmas disco song. It’s called “Dear Santa (Bring Me a Man This Christmas).” It was a big Weather Girls hit. In fact, it was on the same album as “It’s Raining Men,” and was written by Paul Shaffer, who used to be David Letterman’s music director.

Q: The Weather Girls come through for the gays once again! This sounds worthy of some elaborate costuming and choreography. Can you give us a preview of the theatrical aspects of Jingle All the Way in terms of design, costumes, etc.?

A: I don’t want to give away too much. It’s all very traditional with red and green and some silver, but tons of bells everywhere. You will not believe our version of “Jingle Bells.” It includes dancers and choreography that will―well, it’ll jingle all the way home. If I could sneak two hundred bells on stage without anyone noticing―well, we’re going to try to. Meanwhile, we started dance rehearsals last week, and just wait until you see some of the disco moves our choreographer Michelle Chassé has the boys doing!