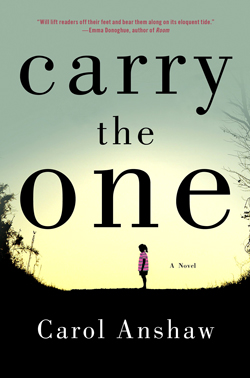 By: Richard Labonte*/Special for TRT–

The flawed natures of ordinary people are at the core of Anshaw’s subtle, sombre and sensitive fourth novel, in which three siblings and a few of their acquaintances and friends cope for 25 years with the death of a 10-year-old girl, hit by their car as they leave a raffish wedding. Carmen, the sister who was wed, isn’t in the automobile, but even she is affected by the tragedy – her marriage founders in its aftermath. The impact on second sister Alice and brother Nick is more profound: Alice, an artist and lesbian – she hooks up with the groom’s sister at the wedding and lusts after her for years – paints portraits, over and over, of the dead girl. Their brother, Nick, an acclaimed astronomer whose defiance of norms is evident when he comes to the wedding in drag, is forever after wracked by inescapable addiction. Though the girl’s death hovers immutably over the trio’s lives, Anshaw’s story is, luminously and with a genuine voice, about the more mundane realities of growing up and growing older.

There is a dark delicacy to this semi-gothic sixth novel by Cameron, a pitch-perfect period piece wherein homosexuality slips into an ever-present background and the forefront is seized by the self-effacing titular Coral. She’s a home nurse, landing in the English countryside in 1950 to nurse (unto a natural death) the horrid mother of middle-aged and now much-closeted Major Clement Hart, badly burned in the war and certain he is destined to a lonely bachelorhood – though he is loved, deeply, by boyhood chum Robin, himself married, conveniently, to rather dotty Dolly. The novel is very British; Cameron, though American, spent childhood years in England and, in style and tone, evokes the askew humor, deep irony and to-the-manor-born reserve of, for example, Barbara Pym. For the first of three sections, the central characters lead decidedly unhappy emotional and physical lives – desperately and disastrously, Clement even proposes to Coral. And then, 15 years later, all is well – Coral is happily married, Robin is divorced and Clement is…well, that would be revealing too much of this tale, which, after all, is delicate. And sublimely delicious.

When the author was seven, in 1958, her mother tried to kill herself. Depression stalked the home of her often-manic mother and her distant, ever in-denial father. Karen – the author’s name through childhood and young adulthood – was the responsible one, an emotional demand that stalked her for years. Eventually, though crushes on teenage peers foreshadowed the truth, she tested the lesbian waters in feminist communes and self-empowerment sessions before coming out at 19, a revelation that distanced her at first from her mother and forever from her father. More than a coming-out memoir, however, this is a poignant, potent reminder that, back in the 1950s (and, even now, for some) accepting and announcing one’s queerness was an experience fraught with peril. In the case of Wilson’s mother, that peril manifested itself in horrific institutionalization, complete with electroshock therapy – an attempt to cure the author’s mother of her own same-sex attractions. This account of how daughter and mother recovered from their shared past and learned to love each again is testament to the healing power of truth.

It’s not until the last couple of chapters in this collection of 150 letters from him, and several dozen to him, that Bayard Rustin, an impassioned pacifist and activist for civil rights and against injustice of all stripes, emerges as a mildly activist gay man – for example, by writing letters in the mid-1980s supporting early attempts to see gay rights supported by the New York City Council. There’s a reason for that. He was gay in an era of homophobia, and when younger was convicted of lewd conduct, the political repercussions of which are detailed in a number of letters in the chapter titled, tellingly, “For me, sex must be sublimated.” That said, “gay” is a small part of Rustin’s behind-the-scenes but nonetheless inspirational life, a deep commitment to the movement for social justice detailed in correspondence culled with care by editor Long, who also provides scene-setting historical and cultural annotations. Collected from over more than four decades, these letters are a reminder that one man can make a difference.

After much thought I have decided that I must decline your invitation to contribute to your collection of oral histories of black gay men. I feel it only fair, however, to give you my reasons for doing so… I was not involved in the struggle for gay rights as a youth. To the best of my knowledge there was no organized gay liberation movement. I did not “come out of the closet” voluntarily – circumstances forced me out. While I have no problem with being publicly identified as a homosexual, it would be dishonest of me to present myself as one who was in the forefront of the struggle for gay rights. The credit for that belongs to others. They are the ones who should be in your book.

*Richard Labonte has been reading, editing, selling, and writing about queer literature since the mid-’70s. He can be reached in care of this publication, or at BookMarks@qsyndicate.com.