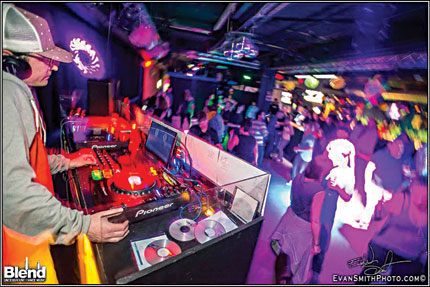 BOSTON, Mass.—Earlier in the year, The Rainbow Times published an article about LGBTQ-themed and -friendly dance nights throughout the Boston area. The piece featured groups such as Gays for Patsy, OUT to Dance, Boston Open DanceSport, Swingtime, and events like those held at Bella Luna Restaurant and Milky Way Lounge, including Dyke Night, Boyfriends, La Boum, If You Can Feel It, Speak It, and Dirty Water Saloon. However, we quickly realized these were only some of the groups and organizations hosting queer and LGBT-specific dance in the city.

Every second and fourth Saturday, the Gay and Lesbian Contra Dance is held in Jamaica Plain through the umbrella group Lavender Country & Folk Dances (LCFD). For 25 years, this group has been holding what they call “gender free dances” for LGBTQ people and allies. Organizer and board member Jon Gintell started dancing with the group in 1997 and said he has missed very few dances and camps ever since.

“I think this dance has formed a very well knit community, and we have parties and do other things together,” Gintell said. “In contra dancing—related to square dance—couples line up in a line, setup into sets of four. A caller teaches the dance and then continues to call while the band plays. A sequence of moves get done and then the couple progresses to the next set. By the end of the evening, you will have danced with everyone in the hall.”

Gintell explained how the gender free dances they host are special.

The Gay and Lesbian Contra Dance has been held in Jamaica Plain for 25 years.
Doug Plummer

“In traditional contra dancing, the roles are called gents and ladies, but in the early days of our dance some people objected to this terminology, so we adopted a convention of calling them bare arms and arm bands,” he said. “At NEFFA [New England Folk Festival Association], there is always a gender free session, but even more interesting is now at many of the regular dance series you will see men dancing with men and women dancing with women or people reversing roles. We feel that our appearance in NEFFA has helped this transition.”

Gintell shared more about how the gender free language serves to make everyone feel included.

“Some people don’t like to be referred by the opposite gender. At a gender free dance, a person can ask anyone to dance regardless of gender, so it is likely that there will be many people dancing the opposite gender role,” Gintell said. “Some transgender people don’t identify themselves as either male or female, so appreciate not being referenced as one or the other of gent or ladies. Others care very much about their gender tag even if their appearance is ambiguous, perhaps because they are [in a] transitional stage.”

He explained why it is important for LGBTQ people to have places like this to dance.

“Although LGBTQ people are seeing much less prejudice and homophobia—particularly true in New England—there are still some people who like to dance with someone of the same gender and don’t want to be treated with disrespect or worse,” he said. “It is great to have a place where no matter what your gender-ID or sexual preference is, you will feel welcomed since there are still lots of places where that isn’t true.”

As for the bar and nightclub scene, Club Café in Boston’s South End hosts LGBTQ-focused dances every Thursday through Sunday.

“I think it’s important to have safe and enjoyable places to dance within our community,” Entertainment Manager Susan Esthera said. “People need an escape from the every day norm. From the entertainer on the piano in the Napoleon Room to the DJ playing your favorite song in the dance room to the bartender making your after work cocktail that you’ve been craving all day, we offer all that and more.”

Club Café offers a variety through their different dance nights, including the newest night, #Yaasss! On Thursdays; I Heart Fridays; RUSH on Saturdays, and the Back2Basics Tea Dance on Sundays, with the third Sunday of each month distinguished as the Bearz Tea. Depending on the night, the club may feature pop, R&B throwbacks, hip hop, reggae, world beats, funk and disco, pop house and tribal remixes, EDM, and classic dance music from the 70s, 80s and 90s.

“Saturdays is our busiest and most diverse night,” said Esthera, who DJs that night. “We see all ages, men, women, gay, straight, and everything in between. I love Saturdays because everyone that comes in comes to dance. It’s always a fun night for me to DJ and I’m very fortunate to have that weekly gig.”

“In the time we live in now, in Boston, the Queer and LGBT community is welcomed everywhere,” said Sean Caron, general manager of Machine Nightclub. “It is not the same as having a place to go 15 years ago when we first opened, but the idea is still the same; it is a place for people to go to be themselves and be able to express themselves that is open to, and a safe place for all people, queer, LGBT, and their allies.”

On Fridays, Machine hosts an 18+ gay dance night in their downstairs level, while at the same, Gay Latin Night takes place in the upstairs level. On Saturdays, the theme rotates from week to week, with the first Saturday offering Blend, an underground dance night on both levels. The second Saturday downstairs is Dyke Nights Monthly Lesbian Night, which Caron says is the largest monthly event for lesbians in the country. Third Saturdays downstairs is Sin-O-Matic, a Fetish Party, and on fourth Saturdays various events are hosted. Upstairs, the second and fourth Saturdays are Controversy, a gay hip hop night, and third Saturdays feature various events. Every Sunday, a night of deep house music is held downstairs

Other nights at Machine offer drag shows, karaoke and more.

For more information on LCFD and the Gay and Lesbian Contra Dance, visit www.lcfd.org. Their next dance is July 26, after which the group will resume second and fourth Saturdays in September. Beginners are always welcome.

For more information on Club Café, visit www.clubcafe.com, and for more on Machine Nightclub, visit www.machine-boston.com.

Hometown Pride: Jake Resnicow Spreads Pride All Over the World