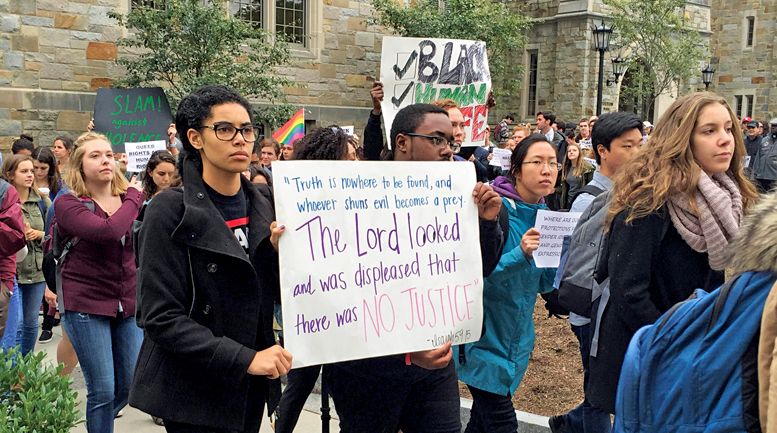 CHESTNUT HILL, Mass.—A recent gay slur incident and additional instances of alleged prejudice at Boston College prompted more than 300 students to march in solidarity and protest the silencing of their identities at the college, according to reports from a college LGBTQ+ organization.

“ … as a gay student at Boston College, I understand firsthand what it feels like to be silenced,” said Dylan Lang, President, Graduate Pride Alliance, GPA. “I have spent so much of my life silent in the closet that I cannot be silent anymore.”

The silence became deafening after the letters on a parking lot sign were rearranged to spell, “no f*gs,” on Sept. 17. The incident went unaddressed by Boston College president.

“The president of a university is a role model, top decision maker, and face of the school. When an incident happens in the United States, the American people look to the President for support, guidance, and actions,” said Lang to The Rainbow Times. “Similarly, when an incident occurs on a college campus, students look to the president to address the issue. Students want reassurance and action, and they want to hear that the president acknowledges them, supports them, and will fight for what matters most to them.”

A press release from the GPA stated “a coalition of Boston College students walked across campus to the parking lot and shared testimonies of violence and hate that they have experienced at Boston College. Instances when racial slurs were allegedly said in passing, not feeling welcomed in classrooms or in dorms, and more were shared.

“It’s not about the sign but the culture that allowed it to happen,” said one student, “today is [the] day that we change this culture.”

Many of the protesters wore rainbow-colored duct tape across their mouths to show solidarity with lesbian, gay, bisexual, and transgender students, and they held signs—including one that read “Silence = Violence,” according to a Boston Globe story.

Although the Dean of Students wrote a letter about the incident, the president of the college, Rev. William P. Leahy, S.J., has not addressed the issue, something that the students consider his obligation to them.

“Students are tired of the silence. We want explanations for why there is no dedicated full time LGBTQ+ staff person, or why there is no LGBTQ+ resource center, or why gender identity and gender expression are not covered in Boston College’s non-discrimination clause, or why there are no all-gender bathrooms,” Lang said. “We feel it appropriate to have an explanation of why this hasn’t happened, so who better to give us those explanations than the university’s leader and president?”

The Rainbow Times made multiple phone calls and sent e-mails to Rev. Leahy and his assistant/s. No communication was returned by deadline from Rev. Leahy, or any of the administration personnel contacted for this story.

The march came after a week of tension built on campus. Although Boston Campus Police Officers, according to the GPA, quickly removed the sign, the Dean of Students only publicly condemned the act in a “weakly worded” letter to a campus newspaper The Heights. In that same publication, the GPA penned an open letter calling on Rev. Leahy to address issues of violence and hate aimed at LGBTQ+ people and people of color. Following suit, the Undergraduate Government of Boston College recently passed a historic resolution to commit resources and efforts towards creating a long-overdue LGBTQ+ Resource Center on campus.

“As a world-renowned institution founded on and guided by the Jesuit ideals of compassion, service to others, and social justice, Boston College can no longer afford to be neutral and silent in the face of hate, discrimination, and oppression,” said Kevin Ferreira, an organizer with anti-racist group Eradicate Boston College Racism, via the organization’s press release.

According to the Boston Globe, students have “clashed with administrators over other race-related protests. In December 2014, some students faced disciplinary warnings for participating in a Black Lives Matter “die-in’ ’inside the campus residence of the Jesuit community.”

To read more about the Grad Pride Alliance, its mission and to view videos of the protest, check out their Facebook page.

*Content also contains a fragment from the GPA’s press release.