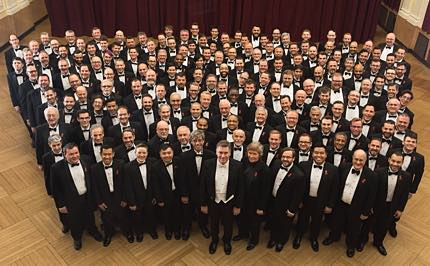 Featuring big production numbers and selections from beloved musicals―Cabaret, The Sound of Music, Into the Woods, Sunday in the Park with George, How to Succeed in Business Without Really Trying―along with “Living for Love” and “Ghosttown” from Madonna’s new album Rebel Heart, Smile coincides with Boston Pride Week, the city’s annual celebration of the LGBT community.

“Music makes us smile! As we return to Symphony Hall for the first time in eight years, our production will celebrate the best of Broadway and the pride we feel as out members of Boston Gay Men’s Chorus and the broader community,” said Reuben M. Reynolds, III, the Chorus’s music director. “We’re also wicked proud to be bringing special guest Laura Benanti to Boston to sing with us. We promise your face will hurt by the end of this show from smiling so much.”

Benanti won the Tony Award for Best Performance by a Featured Actress in Musical for her turn as Louise in the 2008 Broadway revival of Gypsy. She is known to TV audiences for her recent roles as Baroness Elsa Schräder in The Sound of Music Live!; Sadie Stone on Nashville, and recurring roles on Nurse Jackie and The Good Wife. In 2013 she released the album In Constant Search of the Right Kind of Attention: Live At 54 BELOW. And her Twitter feed (she has more than 68,000 followers) is flat out hilarious.

“Laura Benanti is an electrifying, adventurous performer and we’re thrilled that she’ll be taking the stage with us at Symphony Hall,” said BGMC Executive Director Craig Coogan. “Be prepared for some surprises!”

Boston Gay Men’s Chorus creates musical experiences to inspire change, build community and celebrate difference. The BGMC is one of New England’s largest and most successful community-based choruses. Founded in 1982, the 175-voice ensemble is celebrated for its outstanding musicianship, creative programming, and groundbreaking community outreach. Under the dynamic leadership of Music Director Reuben M. Reynolds III, the BGMC sings a wide spectrum of classical and popular music and creates social change by providing a positive, affirming image of the gay and lesbian community. The Chorus is heard live by more than 10,000 people each season and thousands more through recording, television and internet broadcasts. In November, 2013, CBS-WBZ named The Boston Gay Men’s Chorus one of the “top five” choruses in the city of Boston. In June 2015 BGMC becomes the first gay chorus to tour the Middle East.