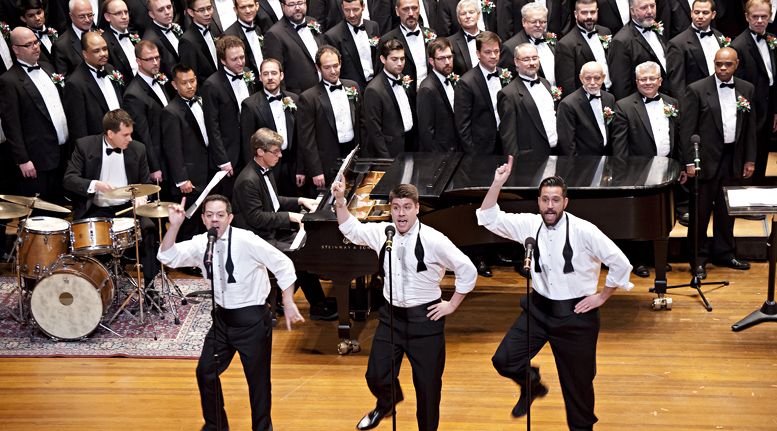 Have tons of fun and Holiday Spirit with the BGMC
Photo: BGMC

Reuben M. Reynolds, III, music director of the Boston Gay Men’s Chorus (BGMC), is in a family way. No, he’s not having a baby. But family, and the ways in which we create and celebrate it, have been on his mind a lot lately. It’s not surprising, given that he’s been hard at work for months planning Believe, BGMC’s highly anticipated annual holiday concert—and Christmas is, after all, about a young family’s journey home and the birth of their son. This year, however, the BGMC family celebrated a birth of its own, when chorus drummer Jonathan Hess and his wife Sonja Tengblad welcomed their son Soren into the world. “We’ve become big uncles to this child,” says Reynolds.

“In the chorus and in the larger LGBT community we talk so much about forming family and their family is now part of our family,” says Reynolds. “Sonja’s doing some incredible music with us that we’ve never had the opportunity to do before.”

In this year’s series of holiday performances, Tengblad will lend her voice to holiday classics like “Oh Holy Night” and “Ave Maria” and Sinead O’Connor’s lilting ode to motherhood, “This Is To Mother You.”

As usual, there will be plenty of Santa-sized showstoppers brimming with the holiday spirit for which BGMC is beloved. Learn more about Believe—and where its name comes from—in this interview with Reynolds.

Q: Let’s start with the inspiration for the show’s title, Believe. Does this show involve Cher?

A: No—for once! “Believe” is the next-to-last song in the concert. It’s from the animated musical film The Polar Express. The song is about, if you believe in yourself and you believe in the people around you, that’s all that matters. It’s all about believing in the spirit of the season, believing in those people who’re around you and the joy that comes when you celebrate your family—both the one you go home to on Christmas and the one you found or chose—be it the chorus, your LGBT family, or your faith community.

A: I don’t know why that movie seemed to grab me this year but our opening number is “The Spirit of the Season,” and we’ll do “Rockin’ on Top of the World,” which are songs from the film. “The Spirit of the Season” is about the electricity in the air around the holidays and you see it around you everywhere—people going to parties, people having fun, people just enjoying this time of year. Our dancers will be doing some fun things with that song! “Rockin’ on Top of the World,” is just a straight-up rock jam—it was sung by Steven Tyler in the film. It’s included in our suite “North Pole Rock & Roll,” in which we take the holiday music a little beyond “Jingle Bell Rock.”

A: “North Pole Rock & Roll” is a big 1950s thing. We’ll do “Rock n’ Roll is Here to Stay and “Rockin’ on Top of the World” and Sonia Tengblad will be with us for “Dig That Crazy Santa Claus,” which really swings. Then we’ll perform a 1950s version of “Santa Claus Is Coming to Town” with some fun choreography, kind of an homage to Hairspray.

Q: I want to talk about the traditional tunes, which the chorus always sings so beautifully. But first, can you tell me about the South African music that’s in the program?

A: Yes! This is a very special part of the program. As we prepare for our South Africa tour next year we’re studying the country’s musical traditions and we’ll be incorporating South African music into our performances in the run-up to our trip.

So, for Believe we have this incredible piece called “Hope for Resolution.” It was written by Paul Caldwell, the director of the Seattle Men’s Chorus, and it takes the chant of “Father’s Love Begotten,” a traditional Christian song, and it combines it with a Zulu freedom song. In our performance, Sonia starts actually in the balcony and you hear this ethereal chant coming from nowhere and it grows and grows and grows, and then the chorus sings it, and then we go into this block of South African freedom songs, and Sonia joins us. For me, the song combines the two cultures and talks about coming together and listening to each other rather than fighting each other. It’s in the first act and it will be just stunning.

Q: This sounds like a beautiful arrangement. Are there any other musical mash-ups in the show?

A: Well, since you asked, yes! “Stars Shall I Find” is a gorgeous poem by the American lyric poet Sara Teasdale about looking out at the night sky, seeing the stars, and wanting to be a peace with those stars. Composer David Dickau set the poem to music and we’re combining it with “O Holy Night.” So, two songs about looking up into the night sky and seeing the stars and the peace that it brings you when you can just let go of your cares and worries and rejoice in the world around you.

Q: What are some of the other classics the chorus will sing in Believe?

A: In addition to “O Holy Night,” Sonja will also join us for “Ave Maria.” We’ll also perform “O Come O Come Emmanuel,” “How Great Our Joy,” and “Hark! The Herald Angels Sing.”

Q: This is such a diverse selection of music. It’s a holiday concert even Scrooge could love, no?

A: Yes! And Scrooge found redemption not just through his own family, but also through the Cratchits, which became his chosen family at the end of the story! With this concert we’re looking at holiday music through different eyes, and we’re celebrating family in a different way. We’re bringing part of our family onto the stage, because Jonathan and Sonia have become very dear to many of us. And to see them with a new child kind of inspired me—and our whole holiday concert this year. It’ll make you believe!

Q: Who would have thought a straight, married couple with an infant son could be so inspiring?

A: Touché! You know, it’s just an incredibly fun and moving time. To look at the difference in the chorus, the number of people in the chorus who have children now, it’s so different than when I came here 20 years ago. It was unusual for chorus members to have kids. But now it’s normal and that’s perfectly wonderful. We’ve become part of so many children’s lives, I think that’s wonderful. And to see another one come along somehow moves me very much this year.