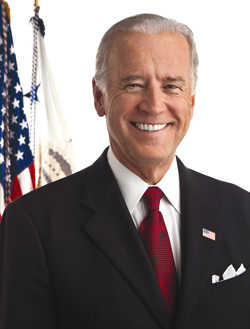 BOSTON, Mass. – A Sarasota, Fla. resident with roots in Massachusetts spoke to Vice President Joe Biden about transgender rights during a rally in that city. Biden, from the conversation, referred to transgender rights, according to Politico.com, as the “civil rights issue of our time.”

Linda Carragher Bourne, 60, and originally from Lowell, Mass. has been a fierce advocate of her trans daughter, The Rainbow Times’ “Ask a Transwoman” columnist Lorelei Erisis. When she spoke to Biden, she was referring to her daughter, Erisis, who was the first Miss Trans New England (2009), a transgender pageant like no other in the country.

“A lot of my friends are being killed, and they don’t have the civil rights yet. These guys are gonna make it happen,” Bourne told the White House pool about the Democratic ticket, according to The Advocate.

Carragher Bourne, an avid TRT Facebook fan with earnest support for the transgender community, has been very vocal online, supporting her daughter’s rights. According to The Advocate, Bourne later told reporters that her daughter was Miss Trans New England and she had asked if the Vice President would help.

“Not only am I excited to hear such a high profile, politically influential person vocally supporting trans rights, but I’m so super proud of my fantastic and supportive Mom!” said a proud Erisis. “She has always been pretty outspoken about her beliefs and will speak about trans rights to just about anyone who will listen.”

Carragher Bourne, who Erisis says advocates for transgender rights all the time one-on-one or through social media, did not plan the exchange with Biden.

“Neither of us knew it was going to happen,” said Erisis. “She was actually leaving the hairdresser’s when she noticed a bunch of Secret Service agents standing around at the Democratic Party headquarters next door. She spoke to several of the Secret Service agents and was eventually passed through to the receiving crowd. As Biden was exiting, he apparently spotted my Mom’s very blue eyes in the crowd and made a bee-line for her!”

When asked if she was at all astounded by her mom’s push for transgender rights to Vice President Biden, Erisis said she was not.

“I’m not at all surprised that my Mom was able to get the Vice President to speak up about trans rights,” explained Erisis. “She can be very passionate, especially when it comes to her transgender daughter!”

Erisis always knew she was a woman. When she came out to her mother about 7 years ago, Carragher Bourne was almost instantly supportive.

“It took her only a little hiccup of adjustment though before she threw all her love and support firmly behind me,” said Erisis. “My mother, and in fact my whole family, including my Dad, my stepparents, my old Irish catholic Nana and even extended family has been incredibly supportive. My Mom, however has gone that extra mile!”

Kamala Harris: A Walk With Our Madam VP