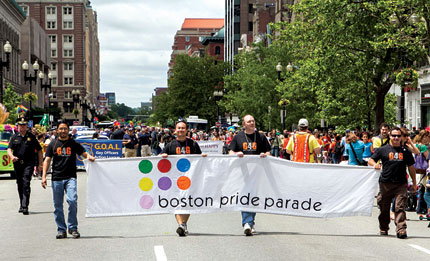 Boston Pride Parade in 2013.
Photo: Marilyn Humphries More photos of BP 2013, when CLICKING on the photo

Boston Pride Parade in 2013.
Photo: Marilyn Humphries
More photos of BP 2013, when CLICKING on the photo

BOSTON, Mass.—Boston Pride, the largest of New England’s annual Pride celebrations and one of the largest in the United States, will be held from June 6 through June 15 in various events throughout Boston, including the 44th annual Boston Pride Parade, the SECOND longest running LGBTQ parade next to New York City’s.

President of Boston Pride Sylvain Bruni said the weeklong series of events mark “a very important moment in the life of our community, where everyone is welcome, is free to be who they are, to express themselves for who they are, in a safe space. Visibility and acceptance are the keywords for this amazing community celebration.”

Bruni shared that this year’s THEME, “Be Yourself, Change the World,” also reflects a bit of his personal history.

“Although I won’t claim I’m changing the world, maybe I’m helping out a bit!” Bruni said. “I’m originally from France and came to the U.S. in 2003. Since then I’ve been a member of Boston Pride and I’ve tried to do my part and contribute to the community, by being myself: a proud, gay, engineer. As an organization, the theme crystallizes where our community is right now and the feedback we’ve received from the community since we announced the theme has confirmed this. We are positioning Boston on the global scale and our community supports that (e.g., our annual human rights event), and it’s also a return to basics. ‘Be yourself’ is what Pride is fundamentally about!”

The events kick off Friday, June 6 at noon with the annual raising of the rainbow flag at City Hall. [pullquote]“[The Flag Raising] symbolizes not only the official recognition and acceptance of the Pride movement by the city of Boston, but it marks the kickoff of the Pride Week celebration!” said Bruni. [/pullquote]

“[The Flag Raising] symbolizes not only the official recognition and acceptance of the Pride movement by the city of Boston, but it marks the kickoff of the Pride Week celebration!” said Bruni. “We are very proud that Mayor Walsh will be hosting his first rainbow flag raising. It’s a great testament to his very strong support of the LGBT community. We are very thankful to him to have us on the Plaza for this event.”

Additionally, Boston City Councilors, the Boston delegation of elected state and federal officials and other notable figures will attend the flag raising, which will also recognize the 45th anniversary of the Stonewall Rebellion, an uprising at a bar in New York City which many consider to have sparked the modern LGBTQ rights movement in the U.S.

Pride Day @ Faneuil Hall will be held Saturday, June 7, followed by the annual LGBT SENIOR PRIDE Tea Dance Sunday, June 8. [pullquote]“The panel will discuss and analyze LGBT issues from legal, political, business, health and cultural perspectives,” Bruni said. “Recently, the Supreme Court of India re-criminalized homosexuality by enacting Section 377, which is having a profound impact on the LGBT community in that part of the world.[/pullquote]

“The dance is a celebration of our senior community,” said Martha Plaza, Boston Pride parade committee chair. “Boston Pride supports this event every year, highlighting our commitment to celebrate with those who have endured so much so that our generation and those to come can indeed be themselves, free and open.”

“The panel will discuss and analyze LGBT issues from legal, political, business, health and cultural perspectives,” Bruni said. “Recently, the Supreme Court of India re-criminalized homosexuality by enacting Section 377, which is having a profound impact on the LGBT community in that part of the world. There are a significant number of Southeast Asians living in the Boston area who are working on advocating for LGBT rights and equality in Southeast Asia, and the panel will discuss ways in which local supporters can help support activism overseas. The panel will explore the paradox that India, the world’s greatest democracy, is moving forward, but archaic laws like Section 377 diminish the global perception in a human rights issue.” [pullquote]Additionally, Boston City Councilors, the Boston delegation of elected state and federal officials and other notable figures will attend the flag raising, which will also recognize the 45th anniversary of the Stonewall Rebellion, an uprising at a bar in New York City which many consider to have sparked the modern LGBTQ rights movement in the U.S.[/pullquote]

LATIN@ PRIDE will be celebrated at several events throughout the week, including Latin Night at Rumors June 11, Latin Invitation at Machine Night Club June 13, and Paparazzi Gay Latino Night, Boston Pride’s Latino Night, June 14. Bruni said that Boston Pride wanted to give the Latino LGBT community the best place to showcase their Pride during Pride Week, and that the organization is still in the planning stages of additional Latin@ Pride events later in the year.

For the second year in a row, Pride Night at Fenway Park will be held at the Red Sox game Thursday, June 12.

“In 2013, Boston Pride made history with its partnership with the Red Sox in organizing a Pride Night at Fenway Park, the first official LGBT event organized by an MLB team,” said Bruni. “This was huge and showed the commitment of the Red Sox and of the sports community in general, to be accepting and supportive of our greater community. We are very proud of the Red Sox for their support, and together, we know we’re making a difference for acceptance.”

The BOSTON GAY MEN’S CHORUS (BGMC) will hold several concerts throughout Pride week titled “Can’t Stop the Beat,” featuring one of this year’s special guests, television and recording artist Alex Newell, who is perhaps best known for playing Wade “Unique” Adams on Glee, and is originally from the North Shore.

“My partner Bill and I were talking about this year being the tenth anniversary of same-sex marriage here in Massachusetts and about how much has changed in those ten years,” said BGMC Music Director Rueben Reynolds. “It seems like we hear every couple of days of another favorable decision in a state I thought would never allow same-sex marriage! It seems to me that we have reached a critical mass where it is only a matter of time until same-sex marriage is an option in every state. Somehow the title Can’t Stop the Marriage popped into my mind. It only took a few seconds to morph into Can’t Stop the Beat! This concert will be a joyous thank you to everyone who has helped get us to where we are today!”

Another event held during Pride week, but which is not actually part of Boston Pride, is the BOSTON DYKE MARCH, which according to its organizers began as a “supplement” to Pride in 1995.

While Triglio said they have a great relationship with the Boston Pride team and are grateful for all their efforts on their behalf, the Dyke March remains a separate event and is “completely grassroots, non-commercial, all-inclusive, politically oriented, and volunteer-run,” with a commitment to “celebrating an inclusive and socially just community.” All of Boston Dyke March’s funding comes from local fundraising, with community partners like Dyke Night Productions hosting and sponsoring fundraising benefits. This year’s march will be held Friday, June 13, beginning at Boston Common’s Parkman Bandstand. Anyone is welcome to attend.

The 44th annual PRIDE PARADE will be held Saturday, June 14, making its way through Boston to City Hall Plaza, where the Pride Festival will be held all day. This year’s Grand Marshals for the Pride Parade are Massachusetts Governor Deval Patrick and The Sisters of Perpetual Indulgence.

According to Bruni, Patrick was selected as Grand Marshal by Boston Pride’s board of directors, while The Sisters of PERPETUAL Indulgence were named as Grand Marshal and the late John MITZEL was named Honorary Marshal through an online community vote.

“The Sisters of Perpetual Indulgence have had a significant impact as a charitable organization in the LGBT community with their activism for LGBT and human rights,” said Bruni. “With their work, both Marshals have embodied the Pride’s mission of inclusion and diversity, and we are grateful to have them as part of our celebration. The Honorary Marshal designation is always given to an LGBT advocate who has passed away. John Mitzel was a Boston gay icon, owning one of the country’s first LGBT bookstores, Boston’s Calamus Bookstore. He also wrote several books, including fiction, poetry and nonfiction. Mitzel was an active participant in shaping the City’s queer cultural identity and helped organize the first Gay Pride March in Boston. He passed away on October 4, 2013.”

The Pride Festival will include entertainment from many performers, including Mary LAMBERT, who wrote and sang the same-sex rights anthem “Same Love” with hip-hop duo Macklemore and Ryan Lewis and recently released the single “She Keeps Me Warm.”

“Her musical success gives great visibility to our community, and the message of acceptance she sings throughout her music is very much in tune—no pun intended!—with our values,” Bruni said.

The festivities will also include several annual dance parties and block parties throughout the area. For a full list of events, including dates, times and locations, visit www.bostonpride.org.