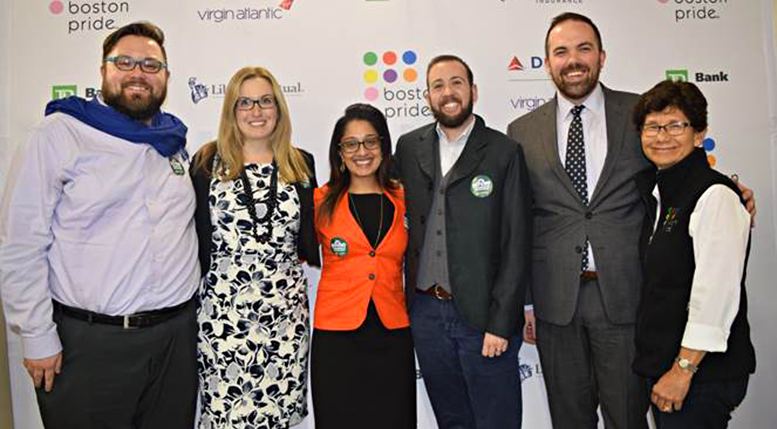 “Boston Pride’s 2018 Pride Parade Marshals are a tremendous group of organizations and individuals who represent the LGBTQ community.  The marshals have been selected by the community through our annual online vote and have made a significant impact in our community over several decades,” said Boston Pride President Sylvain Bruni. “We look forward to having Freedom for All Massachusetts and Jo Trigilio lead the parade while also honoring the legacies of Gordon Burns and Edie Windsor.”

The Boston Pride Parade is a march to celebrate and promote equal rights for the region’s LGBTQ communities. The Parade, which kicks off at noon from Copley Square on Saturday, June 9, is the premier event of Pride Week, which will be held June 1 to 10. As one of the biggest and most popular Pride Parades in the country, individuals and organizations from around New England will walk together to advocate for equality, respect, and inclusivity.

Parade Chair Martha Plaza says that the 2018 Pride Theme “Rainbow Resistance” will further bring the community together during the parade. “On June 9, we will march as a community that displays ‘Rainbow Resistance’ in promoting engagement and inclusivity while striving for visibility and respect.”

Freedom for All Massachusetts

In June 2015, the broad-based bipartisan coalition Freedom for All Massachusetts launched with the goal of updating Massachusetts’ longstanding civil rights law to include nondiscrimination protections for transgender people in public places. The campaign aimed to add gender identity as a protected category in the Commonwealth’s public accommodations law. By June 2016, the law had passed by an overwhelming bipartisan supermajority of votes in both legislative chambers. Shortly after it went into effect on October 1, 2016, opponents of the law secured signatures to force law onto the 2018 ballot. The Freedom for All Massachusetts campaign continues to build the Commonwealth’s familiarity with transgender people and to grow support for fair and equal treatment so that we keep trans equality in the law of the Commonwealth.

Jo Trigilio has been a leader in the LGBTQ community serving on the Boston Dyke March organizing committee for more than a decade before stepping down a few years ago. Jo was instrumental in growing the march from a few hundred to several thousand participants, and maintaining its status as a grassroots, non-commercial and radical event committed to all-gender inclusion. They now head the Boston Dyke March History and Archive Project which makes archival materials publically available online. Jo is a known peacemaker, beloved professor, and activist. Jo is an ongoing contributor to the Boston Pride Guide and has extended themselves to assist Boston Pride in addressing the issue brought by the community. Jo is currently the Program Director of Gender/Cultural Studies at Simmons College. Jo’s current work focuses on non-binary gender and ethnic/racial intersectionality.

Gordon Burns, who recently passed away, was a longtime Pride volunteer and Committee member. Gordon joined Boston Pride over 10 years ago to foster the engagement of LGBTQ older adults in the Pride celebration, and to ensure continued exchanges between the older and the younger generations of the community. Gordon was a founding member of the Senior Pride Coalition, as well as a member of the Boston Prime Timers, the Boston Partnership for Older Adults, the Massachusetts Association of Older American and OLLI Lifelong Learning Institute at UMass Boston.

Edith “Edie” Windsor, who passed away in 2017, was a hero of the fight for marriage equality and the lead plaintiff in the Supreme Court case that bears her name. Edie made groundbreaking contributions to the LGBTQ community through her activism over the years. The “Windsor decision,” which was handed down in 2013 by the US Supreme Court, ensured the federal recognition of same-sex marriages performed in 13 states and in the District of Columbia.

The social media hashtags for the 2018 Boston Pride celebration will be #WickedProud and #RainbowResistance.

Boston Pride produces events and activities to achieve inclusivity, equality, respect, and awareness in Greater Boston and beyond. Fostering diversity, unity, visibility, and dignity, we educate, communicate and advocate by building and strengthening community connections. Boston Pride Week 2018 will be held June 1 – 10.