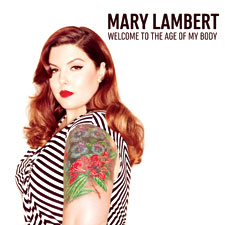 Mary Lambert will headline at this year's Boston Pride Festival. She will be one of many in the line-up.
Photo: Mike Ruiz

Mary Lambert is one of many headliners that Boston Pride has this years for its Parade on June 14, 2014 . CLICK on the photo to watch Lambert’s personalized message to Bostonians and Boston Pride
Photo: Mike Ruiz

BOSTON, Mass.—Boston Pride announced through its mobile app that Mary Lambert, A Great Big World, Alex Newell, JD Samson & Men , and Jeanie Tracy will headline the Boston Pride Festival being held on Saturday, June 14th from noon to 6 p.m. at Boston’s City Hall Plaza. The Festival is the last stop on the Boston Pride Parade route and will host musical entertainment, the Family Zone, the Main Stage Lounge, Artisan Avenue and over 130 vendors.

Mary Lambert’s debut EP Letters Don’t Talk, caught the attention of hip-hop duo, Macklemore and Ryan Lewis, with whom she wrote and sang the same-sex rights anthem, Same Love. The revolutionary song has touched millions, and Lambert has performed it live at The Grammys, The MTV Video Music Awards, The Ellen DeGeneres Show, VH1 and The Colbert Report. Same Love has sold over 1 million copies in the US alone. She recently released her newest single, “She Keeps Me Warm”- the music video hit 1 million views in its first week.

New York pop singer- and-songwriter duo A Great Big World—Ian Axel and Chad Vaccarino—treasure the precious bond between artist and listener. A Great Big World’s famous song “Say Something” with Christina Aguilera hit number 1 on iTunes in 2013. The band has performed at The American Music Awards, The Victoria Secret Fashion Show and The Voice. The duo recently released their new song Is There Anybody Out There?

Glee star, Alex Newell, was born in Salem and grew up in Lynn, Massachusetts. Newell is known for his role as the spectacular transgender character Wade “Unique” Adams on the Fox hit series, Glee. He obtained the Glee role by his performance on the popular Oxygen reality show, The Glee Project, and placed second, earning him a guest role on Glee. Newell is currently working on his first album with Atlantic Records.

JD Samson is best known as leader of the band MEN and for being one-third of the electronic-feminist-punk band and performance project, Le Tigre. In 2007, MEN began as a DJ/Remix/Production team featuring JD. Eventually, MEN became a live band and art collective. MEN’s debut full length record Talk.

About Body was released in February 2011 by IAMSOUND in the USA and through Sony/Columbia in Europe. In October 2013 MEN will release their second album Labor featuring the singles “All The Way Thru” and “Making Art.”

Jeanie Tracy’s singing career began at an early age in her local church and school choir in Fresno, California. After her debut as a solo artist with her first album “Me And You,” she saw her music growing in a different direction- soulful R&B. Tracy is a two time Grammy winner for her songs on the Carlos Santana’s SUPERNATURAL cd, and on the Titanic Soundtrack. She was recently inducted into the West Coast Hall of Fame and continues to write and sing songs that inspire people to feel good about themselves.

Boston Pride Week 2014 will be held from June 6th through June 15th. This year’s theme is “Be Yourself, Change the World.” The week will kick off with the annual Flag Raising ceremony, and will also include, Pride Day @ Faneuil Hall, Pride Queeraoke, Pride Night at Fenway Park, the Boston Pride Parade, the Boston Pride Festival, the Pride Youth Dance, the Back Bay Block Party and the JP Block Party.

More information and details for Boston Pride’s 2014 Pride Week can be found at www.bostonpride.org.

For real time news and exclusive updates download the app for your iPhone or Android today!