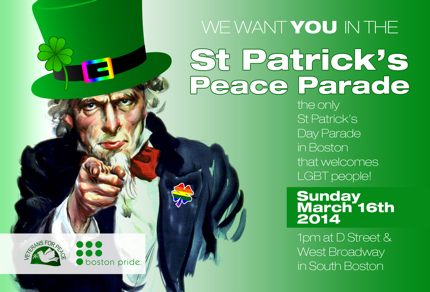 Download the postcard and feel free to distribute widely! Just click the link at the end of the story to download it. Meet at 2 p.m. instead of at 1 p.m.

BOSTON, Mass—The annual South Boston Parade, held on St Patrick’s Day (this coming Sunday, March 16th) in South Boston, continues to turn down all groups from the LGBT community, invoking the Supreme Court ruling that allows them to decline registrations on the basis of the community represented by those who wish to march. And yes, that IS discrimination against our community! Beyond not allowing LGBT people (including LGBT veterans!) openly, the South Boston Parade continues to reject the participation of other veterans groups, like our allies at Veterans for Peace.

To protest this discrimination, Boston Pride is delighted to announce its participation in and sponsorship of the Peace Parade organized by Veterans for Peace, to be held this Sunday, right after the South Boston Parade.

Help fight discrimination against the LGBT community by participating in the LGBT contingent in the Peace Parade.

You can join the Facebook event for the Peace Parade to invite your friends. Download the postcard and feel free to distribute widely!