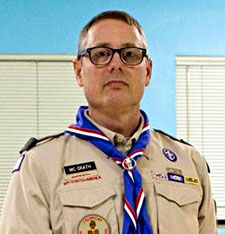 WASHINGTON – The Human Rights Campaign, the nation’s largest lesbian, gay, bisexual, and transgender (LGBT) civil rights organization, is calling on the Boy Scouts of America to end its longstanding discriminatory ban on gay adults in Scouting after BSA leaders revoked the membership of an openly gay Scoutmaster in Washington state when he came out in an NBC News profile.

According to news reports, Geoff McGrath, 49, leader of Troop 98 in Seattle’s Rainier Beach neighborhood, is believed to be the first gay adult to have his membership in the Boy Scouts of America revoked since last May’s controversial vote to allow gay youth—but not adults—to participate in one of the country’s most popular youth organizations.  McGrath was being profiled by NBC News. BSA leaders said he was “making an issue” out of his sexual orientation for acknowledging he was gay.

“Banning a caring Scoutmaster who has dedicated his time and efforts to helping young men grow into adults of integrity is a moral outrage,” said Jeremy Pittman, HRC’s deputy field director and an Eagle Scout. “Parents and adults of good moral character, regardless of sexual orientation, should be able to volunteer their time to mentor the next generation of Americans.”

In a letter to Mr. McGrath, BSA leaders rely on the outdated thinking behind the U.S. Military’s now repealed “Don’t Ask, Don’t Tell” policy, writing, “[i]f a volunteer makes an issue out of his or her sexual orientation – especially to the youth we serve –  then that volunteer is no longer eligible for to be a registered leader. That has been part of the adult leadership qualifications for many years.”

This is not the first time an openly gay Scoutmaster has been banned by the organization.  In April 2012, Ohio mom Jennifer Tyrrell launched a Change.org petition calling on the Boy Scouts of America to end its national ban on gay scouts, parents, and scout leaders after she was ousted as her son’s den leader because she is gay. She sparked a campaign led by GLAAD and Scouts for Equality to advocate for an inclusive BSA, which has resulted in several corporate sponsors withholding funds as well as hundreds of celebrities, elected officials, scouts and religious institutions speaking out against the ban.

Last year, the Human Rights Campaign Foundation announced more stringent criteria for its Corporate Equality Index. To receive a perfect score in the future, companies would have to prohibit philanthropic giving to non-religious organizations that have a written policy of anti-gay discrimination, or permit its chapters, affiliates, or troops to do so.