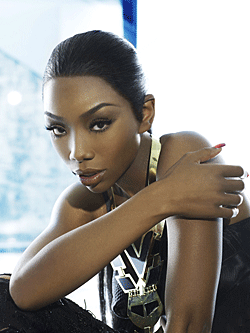 The ’90s wouldn’t have been the same without Brandy. The plucky then-teen, who was just 16 when she released her 1994 debut, dominated the charts with an iconic run of hits: “I Wanna Be Down,” “Have You Ever” and her diva-off with Monica, “The Boy is Mine,” a song so abiding that even Glee couldn’t resist a cover.

But with a starring role in Moesha, debuting in 1996, the cross-pollinating performer quickly made it clear that she wanted to conquer not just music but acting, too. Later that decade, she’d star in Cinderella with Whitney Houston.

Brandy’s relationship with the legendary icon, and the tragedy of her death last year, is evoked in the title of Brandy’s latest album, Two Eleven, eerily representing the day Houston died and also Brandy’s birthday.

Now 33 and recently engaged, Brandy opened up about those early years as a tomboy, how she can still channel heartbreak despite her happiness and why her gay audience is, as she says, “the best audience.”

Chris Azzopardi: Can you believe it’s been almost 20 years since you released your self-titled debut?

Brandy: Oh my lord. It doesn’t feel like it’s been that long. I remember doing the photo shoot for the album like it’s yesterday. I have so many memories of doing the first album and working with some of the producers that I worked with, and being in the middle of Times Square doing the video (for “Baby”). I remember certain things about that album like it was yesterday.

Q. And how about those clothes? You were such a tomboy then.

A. I was! I was a tomboy. I still am sometimes. Boys are fun. (Laughs) It’s fun, you know, wearing the boots and the baggy clothes – and the hat! Back then baggy clothes on a girl were so cute. If you didn’t have baggy clothes, you were not hot.

Q. Besides your fashion evolution, how else have you changed between that album and Two Eleven?

A. With the first album I was just a teenager trying to find my way. Now I’m a woman and I know very much who I am, but I have not lost that innocence and that shy part of who I am. I’m still very shy. You would be shocked to find out that I’m still stage fright, and although I will talk to anybody I meet – I’ll have a full conversation with them – there are still some things that make me shy and bashful. I never wanna lose that. I never wanna lose the part of me that I had when I first started – you know, the humble side. You always wanna be appreciative, and I think I’m more that now because of my struggle and because of everything that I’ve been through. I’m appreciative for every little thing that comes my way – even this conversation, to bring awareness to me and my music is a blessing.

A. When people express how they feel about me and my music, and when people come up to me and cry when they meet me, I just feel so awkward. It just makes me so introverted. I don’t know. When other people I admire say things and people just go on and on, it makes me feel really weird. And when people talk about me like I’m not there, that’s weird. And when people put me on the spot – I don’t like being put on the spot. It’s just – I get really shy at times. And I’m stage fright. Oh my god. Right before I get on stage, I’m just like a – I was about to curse. (Laughs) I’m a nervous wreck.

Q. You didn’t seem so shy when you were singing a love song to a gay guy at San Jose Pride a few years ago. Yeah, that’s right – I saw the YouTube video. Do you remember that?

A. (Laughs) I do, I do! It’s funny, when I get into the zone onstage, it really becomes about my fans and making them happy and making them feel my heart, so the shyness goes away a little bit onstage. Like, once I’m there, once I start, I can sing to my gay fans – and my straight fans, and whoever wants to hear me sing – and I’ll get through it.

Q. When did you know you had a gay following?

A. This older guy came up to me – I was about 16 years old – and I think he was my makeup artist’s friend or boyfriend. They didn’t really admit it to me, but I kind of thought something was going on, and he comes up to me and he’s like, “Brandy, girl! We gay boys love you! We looooove you.” And I’m like, “Really? That’s dope!”

One of my best friends was gay in high school and he just had so much love for me, but I didn’t know I had a following of gay fans, and so he was like, “Oh, and you so pretty. If I was straight I would take you out.” (Laughs)

Everywhere I go, (my gay fans) come out and support me and make me feel so loved and so appreciated. I did a whole run of gay clubs recently with the album. I would do my other stuff and then go and perform at like 2 in the morning. The energy just feels completely different. Like, they go in for me. And I’m telling you, I become this other person onstage because of that. Ah, I could go on and on about my gay fans.

Q. So you did a club run for Two Eleven?

A. I did. I did a lot of stuff in New York. I did some stuff in – oh, where was I? I don’t know where I’ve been, but it was specifically for my gay fans. They have been the best audience for me. It’s just a different level of love. It feels like overseas love, because when you go overseas and you haven’t been in a long time they go crazy – and that’s how I feel.

Q. You seem to know your gay fans pretty well. Which songs off the album do they love?

A. I know they love “Let Me Go” and “Do You Know What You Have.” They’ve really been showing a lot of love for Two Eleven as a whole. But I go to this site that one of my gay fans started for me called BrandySource.net and get all of their opinions on what I should do next, if they didn’t like my outfit … I need to know what they think! And they’re gonna tell me the truth. I love that. And it’s no shade, either! It’s just all love.

Q. My favorite songs of yours have always been the ballads. There’s nothing like a Brandy ballad. How are you so good at sounding so sad?

A. (Laughs) Because I’ve been through a world of pain. I’ve had my heart broken a few times at a very young age – and then after that, somebody else broke my heart. So I’ve had my encounters with heartbreak, and I can remember what that felt like.

Q. You and Frank Ocean haven’t just worked together, as you did on this album, but you’re also friends. What did you think of his coming-out letter on Tumblr?

A. I was so amazed by that. It was just so brave and it represented so much. His truth just set him free. I just think that when you can tell your truth – and are proud of your truth and use your truth for your art and to inspire someone else to connect with their truth – you are now a gift. He is a gift.

Q. Do you think the urban community is more accepting and open when it comes to gay people than it was when you first started two decades ago?

A. It better be more accepting. This is just the way it is, and people just need to realize that love is unconditional. It knows no sex, no race, no culture. It just knows itself. That’s it. And if people don’t want to see that, then they’re blind. I have no words for people who don’t want to accept or see that.

Q. Did you notice early in your career much homophobia within the urban community?

Q. Your daughter is 10 now. How are you teaching her acceptance and love for everyone?

A. I teach her that love is unconditional. It knows itself and that’s it. My tennis coach is a lesbian and she’s got a great partner and they have a child together, and we’ve all hung out. It’s not something I keep from her. She needs to know that this is the way it is and that love is gonna do what it do. That’s what I teach her. She loves my gay friends and she loves my tennis coach and her partner, too. To her, this is the way it’s supposed to be.

Q. For the new album, Frank wrote “Scared of Beautiful,” a song you’ve said you relate to. Does that mean gay men understand women better than straight men?

Q. Beyoncé told me the same thing when I interviewed her: that when she refers to the girls running the world, she also means the gays.