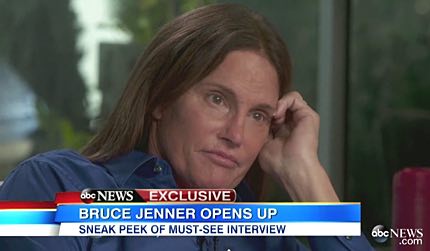 After months of speculation, tons of Paparazzi stalking, and some insensitivity on the part of some media, late talk show hosts, and many LGBT opponents, Bruce Jenner told the world what he had been holding inside for many years. The former Olympic hero told told Diane Sawyer, in an exclusive ABC interview, “for all intent and purposes I am a woman!” Jenner also told her that he “had been thinking about this day forever. …”

“The courageous action Jenner has taken as a sports role model will inspire and strengthen transgender athletes around the world. Jenner’s bravery will inspire our transgender youth to shoot for the gold in all levels of sport,” said NCLR Sports Project Director Helen Carroll.

The sense of belonging and self-respect was more than due for Jenner.

“There is nothing more important to human dignity than being able to live an authentic life. This is a central aspiration of the struggle for LGBT liberation,” said NCLR Executive Director Kate Kendell. “We congratulate Jenner’s quest to realize that goal. However, while this is a cultural milestone, the real-life experience of transgender people in this country is too often a denial of safey and fundamental dignity.”

The two hour special on ABC News, made Jenner become one of the best-known openly transgender figures in the world. It also put to rest widespread speculation about Jenner’s identity in the national media. [pullquote]”And we hope that Jenner’s message of authenticity and openness will shine a light on the unique challenges that transgender people face and help further equality.—TLDEF Executive Director Michael Silverman[/pullquote]

Added Silverman: “And we hope that Jenner’s message of authenticity and openness will shine a light on the unique challenges that transgender people face and help further equality. We support every transgender person’s right to come out at a time that is right for them, and wish Jenner every happiness moving forward in the world authentically.”

The TV show broke viewing records and it took Twitter by storm. According to the ABC network, more than 1 million tweets worldwide with the Hashtag #BruceJenner inundated social media. Variety reported that more than 17 million people watched the Olympian come out as a transgender woman. And, things don’t end with just his story tonight.

The producers of “Keeping Up With the Kardashians will follow Jenner (who prefers to use male pronouns for now) through his transition in eight episodes set to air in July, reports The Hollywood Reporter. Respected transgender activist and GLAAD board member Jenny Finney Boylan, who is author of She’s Not There, confirmed she is a consultant on the production.”

However, transgender people coming out do not receive the level of support or understanding that Jenner has received. According to a Time.com story by Mara Keisling, it is that privilege what is missing from stories like Jenner’s. [pullquote]”I sympathize greatly with Bruce’s experience, but I also recognize the huge privilege that comes with being able to share your story with Diane Sawyer on national television. …”—Mara Keisling[/pullquote]

“I sympathize greatly with Bruce’s experience, but I also recognize the huge privilege that comes with being able to share your story with Diane Sawyer on national television,” wrote Keisling. “Most of us transition with little fanfare or recognition at all — but each of our stories are important.”

People’s reactions regarding Jenner’s coming out and his privilege varied, BUT it was the reactions from family, celebrities and thousands of thousands of people via Twitter what seems to have made the most impact.

#BruceJenner we learn from you to be courageous, funny and to be our authentic self. With love and Go For It!

I've interviewed #BruceJenner many times, and I'm in his corner. I support him & offer my respect.

One small step for man, one giant leap for mankind. #BruceJenner #Brave

Bruce Jenner is a beautiful, brave human being. Sending him lots of love. He's saving lives and opening minds tonight.

Your honesty has opened the doors for others to be courageous and live an authentic life! #respect #hero #family pic.twitter.com/SNhN8pgrh5

#Transgender older adults are not getting the support they need. 1st time? Learn about the challenges: http://t.co/8NoXHDJuUI #BruceJenner

Thank you #BruceJenner. Your testimony will make this world a better place.

Thank you Bruce Jenner. All transgender people have rights under the law. Say #IDO to trans equality & learn more: http://t.co/ikOsxfkN80

"All of us deserve the right to be loved for who we are ". Bravo #BruceJenner

[Parts of this report came from News Releases]

Key Cases Before SCOTUS: Our Rights At Stake