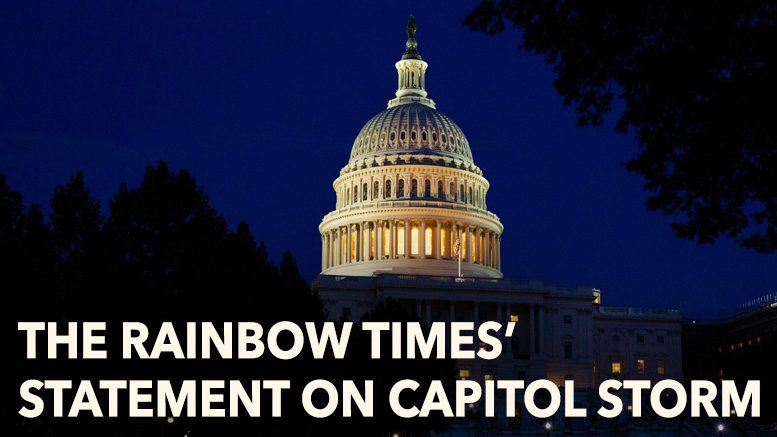 A Statement from The Rainbow Times’ Publishers on the Domestic Terrorist Attacks at our Nation’s Capitol on January 6, 2021.

In the strongest of terms possible, The Rainbow Times condemns and denounces the domestic terrorist assault and attempt to overthrow our government at the nation’s Capitol yesterday. We are equally disturbed and outraged at the lack of police response to protect our Capitol, the people’s house, and our Senate and House Representatives. Likewise, we call for the immediate removal of Donald J. Trump from the office of the President after holding a premeditated rally to incite and encourage his blind followers into a military-like coup of our government. He is a traitor to our nation and must be held accountable for fanning the flames of hate against those most marginalized among us. In this case, he made an outright call to arms against our own leaders and republic. America has stood to oppression, genocide, political unrest, and the such when other nations have undergone it. America has condemned it of others. Yet, it was permitted on our own soil yesterday and watched everywhere in the world, to our embarrassment and horror, dismay and repulsion. Such actions—by those inciting them and by those carrying them out—should never be tolerated or accepted under any circumstance, let alone by a  sitting president. Instigating violence against our own government and institutions, Congress in this case, under the false pretense of a fraudulent election and demanding unlawful acts to overturn the people’s will and votes is unconscionable.

The national attack was largely committed by white supremacists, domestic terrorists, and right-wing extremists who not only physically scaled the walls of the Capitol, defiled and ransacked government official’s offices, and held them hostage, but those same terrorists escaped the building while boasting about their lawlessness uninjured, untouched. Yet, 4 deaths resulted in their onslaught against the American people and our democracy, and we lost credibility, power, and our place on the world’s stage—our ability to use our voice and expertise forever questioned in global affairs and within our own borders.

We are infuriated at the lax approach of some law enforcement officers against these thugs and mobs that committed such acts of violence simply because they didn’t get their way—because they couldn’t coerce the election process or thwart the will of the people. We demand to know why some officers are seen taking selfies with the criminals and others that removed the barricade to let them into the sacred space of the Capitol to assault the American legislative body. The police were sparse and not able to contain the rioters and the National Guard, FBI, and other law enforcement officials never arrived at the scene until hours into the insurgency. We demand answers to this despicable lack of response and allowance of the attempted coup to occur in the first place. These are the acts we expect in nations around the globe that do not have a democracy—only the nation this time was the United States. We are not a banana republic although yesterday’s disgrace would appear otherwise.

When Black Lives Matter (BLM) protests erupted around the country, in response to the numerous murders of black people at the hands of biased law enforcement officers, they were infiltrated by some of these same outlaws who set fires, looted, and created mayhem to allege that the BLM protesters were responsible for it. In all actuality, it was later reported that white nationalist insurgents disguised themselves as BLM protesters to mislead the American public into thinking that BLM protests were violent. To imply that the thugs and rioters, the unAmerican cowards that ransacked the nation’s Capitol were anything like the BLM protesters is plainly an inflammatory statement rooted in utter racism, discrimination, and oppression.

There is a double standard in this country condemning and ending Black lives while exalting white supremacy, as we witnessed yesterday. Trump, his sons, and even some GOP members of Congress (Senators Josh Hawley, Ted Cruz, Lindsey Graham, Mitch McConnell, etc., though the last two renigged later last night as the body reconvened in the same desecrated Chambers violated earlier) have supported conspiracy theories and disinformation aimed at conning and confusing Americans. By not accepting Joe Biden and Kamala Harris’ victory, this base also has blood on their hands for what took place on January 6th, 2021—a day that will live in infamy as soon-to-be Majority Leader Chuck Schumer said last night as the brave members of Congress reconvened to certify the election results.

But, what took place is something that will not be erased in one day, nor one year, nor 10. Our democracy is and has been broken for more than 400 years. By not ensuring that all Americans are treated fairly and equitably under the law without negligent bias, we continue to embolden and encourage behaviors such as the one most of us astonishingly witnessed yesterday as Trump mobs defied American institutions and values.

Like most media, The Rainbow Times is also under an onslaught of attacks on its social media pages and has received threats via e-mail too, claiming that we (the media) are the problem, just as Trump has taught them to repeat endlessly. Based on the context of what we have experienced, personally and professionally, we believe that some of these threats are from local, state, and national residents, especially those that have ties and abhor the LGBTQIA+ community and have made it clear in so many ways—always anonymously, of course.

Contrary to what Trump and his entourage claim, any reputable media is the watchdog that guards and reports on the truth to the American public. Regardless of the threats we receive, we will continue to do our job without fear of retribution. We are here to report on the truth objectively (after research and through the words of credible sources) and to protect the Fourth Estate/Power—established by this government of a free press—to be free of government interference and bias. As such, we stand. We will also not allow our social media or online platforms to be used as a tool to spread disinformation about this sedition or any other lies—mal-intended or treasonous comments perpetuated by Trump and his uninformed followers. That will not happen on our watch. All comments that are not made in reference to a factual basis (reputable sources) will be deleted. This is a time to hold the truth and our role to a higher standard. As we do with the Fourth Estate, we expect our local, state, and federal government and officials, along with social media and the tech industry to do the same with such falsehoods presented to the masses.

NOTE: We mourn those who perished during this attempted coup and we vehemently condemn anyone in powerful positions or with influence who continues this level of discourse and disinformation to others with less access to it.