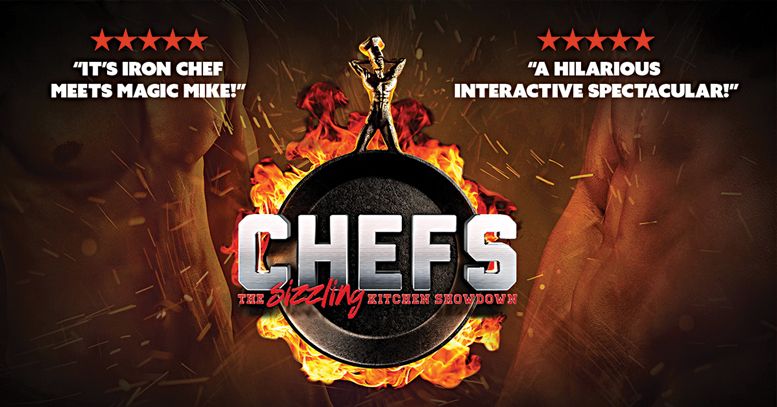 CHEFS: The Sizzling Kitchen Showdown opens on March 14 at CityStage in Springfield Mass.

Feast your eyes on CHEFS! These hilarious (and delicious) hunks give you a peek behind the apron as they slice, dice, and spice things up in the kitchen through a series of escalating culinary challenges where the stakes are high: if they lose a challenge, they lose their shirt. Literally. CHEFS is a fully interactive experience where you will vote for the winner and may even join the boiling hot chefs onstage for uproarious cooking demonstrations. Outrageously bold and hysterically funny, CHEFS is “too hot for TV,” making it the perfect night out! (Not recommended for children – adult audiences only).

Roslyn Hart, director and writer of CHEFS dished out the spicy info for the show, set to hit CityStage next month.

Q: Sexiness and food clearly go well together. What inspired you to create CHEFS?

A: The opportunity to work with Chef Patrick Wilde—the sexy bad boy of the culinary world, a former stripper who opened his first Michelin-starred restaurant with the million in singles he earned from stripping—was too good to pass up. He’s having a culinary tournament to find a chef to run his new Vegas restaurant, and all contestants must be male strippers. He wants to give other male entertainers the chance to “Get off the pole and into the pantry”. This is the hottest cooking contest in the world.

Q: If the chefs loose a culinary challenge, they loose their shirt, literally. What else do they loose as the challenges progress?

A: Well, there are 7 challenges, one winner per challenge, and their uniform consists of only 3 pieces. You do the math.

Q: Your website states that the show is more interactive than the Blue Man Group and Magic Mike. How so?

A: I don’t believe in spoilers, but I can tell you the entire audience [is] involved from start to finish. You’ll vote for your favorite chef, yell at the losing chefs to TAKE IT OFF, throw things, catch things, taste things—and many audience members will be called onstage to help the chefs complete their challenges. Sit close and you might become a slicer, a dicer or even a human dessert. So, get those abs in shape, and learn where the eggplant emoji is on your phone. You’re gonna need it.

Q: Are the hunky chefs actually professional culinary experts or is this experience more about the sexy nature of getting behind the apron?

A: Not only are these ridiculously hot chefs experienced in the kitchen—one was a prison cook profiled on the Food Network, another is a cowboy who bakes pies over an open flame—they are also world class male strippers. So, every time they lose a culinary challenge, they don’t just take off an article of clothing, they have to PERFORM while taking those clothes off, and they may pull you onstage to help with that performance. Expect virtuosity, theatricality and lap dances.

Q: If you could describe this show in 4 words, what would they be?

Grab tickets to this sizzling performance at http://www.symphonyhall.com/shows/chefs-sizzling-kitchen-showdown/

Visibility Of Marching in the 2019 Springfield Mass. Puerto Rican Parade