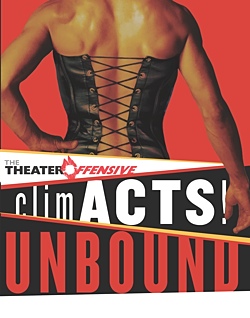 BOSTON, Massachusetts – ClimACTS! is the “can’t-miss party of the year” according to the Boston Phoenix, and this year the party is breaking bounds. ClimACTS! Unbound celebrates queer sexual liberation to support The Theater Offensive’s arts programs by, for, and about the LGBT community in Boston’s neighborhoods. ClimACTS! Unbound is on March 20 at Rumor (100 Warrenton St.) and tickets are available online at www.thetheateroffensive.org.

“Not every LGBT gala has to please the straightest common denominator,” says Executive Artistic Director Abe Rybeck. “Our accomplishments are vital and relevant enough that they speak for themselves, so we can break out the big nasty fun at ClimACTS! Unbound!”

ClimACTS! is unlike any other fundraiser. Hundreds of the Boston LGBT community’s most influential and fun-loving folks will get together for delicious food, stunning celebrity performances, exuberant action on the dance floor, and the legendary fantasy auction.  Previous auction items have included a walk-on role on “How I Met Your Mother” with Neil Patrick Harris, VIP tickets to the Ellen Show, and global getaways including the porno-centric Fluffer package experience in Prague.

Now in its 24th year, The Theater Offensive: OUT in Your Neighborhood (OUT’hood) works in Roxbury, Dorchester, Jamaica Plain, and the South End to create original, groundbreaking works by, for, and about the LGBT community. TTO also runs True Colors: OUT Youth Theater, a program for LGBT youth and their straight allies ages 14-22.

“We’ve gained amazing support over the past few years because of TTO’s leadership in working with LGBT youth creating work to address bullying, suicide, and homelessness, which the media has covered with increased frequency,” said TTO Managing Director Adrian Budhu. “But we have a lot of work to do for the communities right in our backyards, particularly in neighborhoods who face heightened poverty, violence, and racism. The funds ClimACTS! Unbound will raise for OUT’hood and True Colors are critical to the continued success of these important programs.”

Sponsorship opportunities for individuals and businesses begin at $500. Contact adrian@thetheateroffensive.org for more information.

The Theater Offensive: OUT in Your Neighborhood works in Boston neighborhoods to create original, groundbreaking works by, for and about the LGBT community. Their year-round community-based workshops, intensive engagement with at-risk youth to end bullying, and free street theater performances are focused in Roxbury, Dorchester, Jamaica Plain and the South End.  OUT in Your Neighborhood expresses the diversity of the city of Boston, gives voice to underserved LGBT community members, creates avenues for cross-cultural dialogue and breaks down the barriers of homophobia, bigotry and hate.

The Theater Offensive started 1989, led by current Executive Artistic Director Abe Rybeck. Throughout its history The Theater Offensive has furthered its mission “to form and present the diverse realities of lesbian, gay, bisexual and transgender (LGBT) lives in art so bold it breaks through personal isolation and political orthodoxy to help build a more honest, progressive community.” The Theater Offensive is a Resident Theatre Company at Boston Center for the Arts.