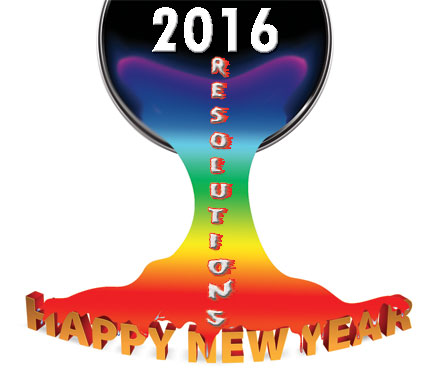 The end of the year is rapidly approaching. That means a time for reflection and making New Year’s resolutions. The Rainbow Times, via this reporter, asked activists, community members and politicians what they hope to achieve in 2016. The answers were as diverse, as the group of people who were approached for it. Another follow-up to this Q&A will follow in the January 2016 issue of TRT.

“I did not have any resolutions last year!!!! I believe in challenging myself every day … And that is what my staff and I do. We are never complacent and are striving to always take our work to the next level-to create opportunity, break down barriers, and assure economic stability throughout the state.”

“I have a professional resolution and a personal one. Professionally, I hope to continue advocating for a statewide fully inclusive public accommodations bill, to protect the rights of all our Commonwealth’s residents. Personally, I’d like to email less and sleep more at 2am! Always trying to squeeze another hour or two into the day.”

“I guess I would say that one of my resolutions would be to be more patient and Buddhist in all aspects of my life but especially when I’m driving. What am I in such a big hurry for? But I find myself getting so pissed off if someone is driving too slowly, or not signaling. With all the hurt that is going on in the world, being more kind, patient, tolerant and forgiving needs to begin with me. My other resolution would be to spend as much time with my friends and family as I can. My daughter was in Paris last fall as a student and spent many evenings in the area that was targeted by the terrorists. This world is so different now, more so than it was last year at this time. We can’t live in fear but we need to live each day as if it were our last and extend love, tolerance and light as much as we can.”

“I guess I don’t usually like the term ‘New Year’s Resolutions’ since it can imply that there is a specific end goal. I prefer to think of myself as constantly evolving and always being a ‘work in progress.’ One of the things that I would like to be better at is setting boundaries in terms of work and commitments. I have heard of politicians and elected officials who choose to have a ‘real day off,’ where they do not answer emails, phone calls, etc. and how this positively impacts their being able to balance their lives and responsibilities. I usually have a hard time truly disconnecting from responsibilities and work, so I think that may be something I would like to work on.”

“This year I am going to focus on finances, especially savings. I have never spent a whole year looking at savings and my goal is to develop better habits around saving money. The other area I want to focus on is allowing more creative expression in my life, specifically writing. My goal here is to also develop better habits about making room to write, creatively and professionally. How have these changed since 2015? I am more focused on process instead of outcome—i.e. developing the habits to be mindful of my finances and savings and developing a space for writing. That is different than saying my resolution is to boost my 401K or write the next great American novel.”

“Secure explicit protections for transgender youth, adults, seniors and families in all of Massachusetts’ public places. This is my same resolution as 2015 because Massachusetts has fallen embarrassingly behind in protecting the civil rights of its transgender residents. At nearly every critical crossroads in the fight for freedom throughout American history, Massachusetts has been a leader. We served as the birthplace of the Revolutionary War. We hosted the first drafting of the United States Constitution. We were the center of the movement to end slavery, and we were the first state in the nation to legalize marriage for same-sex couples. There are already 18 states that fully protect transgender people from discrimination in public places – laws proven to be a tremendous help to transgender people while hurting no one’s. I resolve to work to ensure that Massachusetts not fall any further behind.”

“For 2016 my resolution is to Create! Create! Create! As an artist, I want to focus my life on creating more. In 2015, I spent the time creating and implementing programing for CONNECTED Boston, a program of the Multicultural AIDS Coalition that focuses on the health outcomes of black and Latino gay, bisexual, trans* and queer men. Developing the program was my focus of 2015 and now in 2016, I will focus in on using art to amplify the voices of queer people of color specifically.”

While we don’t usually make organizational New Year’s resolutions, all of us in the BAGLY family do try to recommit each year to continue our work in collaboration with our community partners on behalf of racial, gender, and economic justice for the LGBTQ youth of all our communities!”

“My resolution for 2016 is to practice more self-care and challenge myself to engage, and be present with, my community in different ways than I have been before.  I also want to continue supporting the growth of the Hispanic Black Gay Coalition and the development of our staff, board, and volunteers.”

“I have several. I am a husband and a dad. My first priorities are always to create a safe, nurturing environment for my son and husband. I am an artist, and I have not been able to focus on this part as much as I would like over the past year. I have a renewed my determination to, at least a one night a week, creating art or drawing. I also plan to pick up my filmmaking again! My community-focused goal is to create a 501c3 organization to begin the process of creating an LGBTQ Community Center for Central Massachusetts. It will take longer to build a center but the organization and community needs assessment can be completed in one year. My professional goal is further my diversity training and to create a more robust Art in Medicine program as well as focus on LGBT health in the UMass Worcester Academic Health Sciences Center.

In January of 2014, I was really focused on making my last year as president of Worcester Pride the best year possible, since it was our 40th anniversary of Pride! I think Pride did have an excellent year and is now in excellent hands. I was less focused on my art. I will also have my son and husband at the top of the list, so I don’t think that will have changed much.”

My professional goals were more creating a portfolio of work from a completely redesigned web presence to the addition of social media to specific art projects for my new position in the diversity office.  I had previously had projects with a diversity focus, but working exclusively on diversity was new.

I would sum it up as establishing myself in my new job last year and this year blossoming into career tracks. I would say in the community area I went from making sure that Worcester Pride had the best year ever to establish a new organization and increasing what Worcester has to offer its LGBT community. This year I am also being sure I have the time for personal artistic development. My family focus has not wavered and I don’t expect it to either.”

“I usually don’t make “resolutions” as we typically know them. Instead I like to set my intentions for the year. So, this year I want…

“In 2016 I resolve to be the best husband and father I can possibly be.”

“I have two resolutions. Now that marriage equality is here, my first resolution is to make sure the world knows we still have many fights ahead to protect LGBTQ parents. In 2016, we’ll be standing up for equal rights in cases of adoption and foster care; demanding we are treated fairly when it comes to housing, employment and public accommodations; and pushing back against all the upcoming RFRAs that will only serve to hurt our families. And my second resolution is to help find Family Equality Council an inspiring, visionary Executive Director to lead us in these battles.”

“Among my 2016 resolutions are to: change my name legally to Ben Power Alwin, and to raise funds from the LGBTQI community to purchase a wheelchair ramp for the SMA’s new Archives House in Holyoke, MA. These resolutions are new for 2016 and differ from my 2015 resolutions which included: getting a mortgage and buying a new house for the SMA, and stepping up my social justice activism.”

Stay tuned for more New Year’s Resolution on the January, 2016 issue of The Rainbow Times.