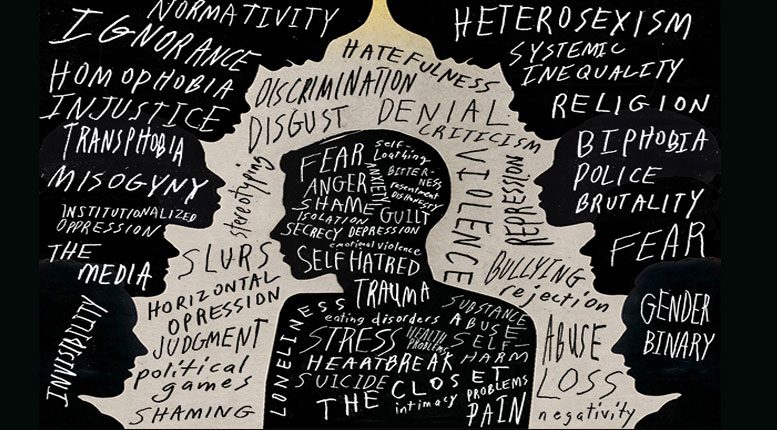 Internalized Homophobia. It’s real and terrifying to the self and others.

The trend is ongoing and it looks something like this …

“The founder of one of the nation’s largest conversion therapy programs, who spent decades leading the organization, now says he is gay, apologizing for his role in the practice,” reported The Hill.

McKrae Game founded Hope for Wholeness in South Carolina. Game was fired by the organization and came out publicly in June. Recently he released a letter on social media apologizing for his part in destroying lives through conversion therapy.

“I certainly regret where I caused harm,” he wrote on his Facebook account. “Promoting the triadic model that blamed parents and conversion or prayer therapy, that made many people believe that their [sexual] orientation was wrong, bad, sinful, evil, and worse that they could change was absolutely harmful.”

Yet, the damage is done. Although he has come to this realization now, his inability to accept himself lead him to destroy the lives of many people in the process. Countless LGBTQ people have attempted suicide in large part to lack of acceptance from society and the gender “norms” imposed by the culture in which we live.

“So-called ‘conversion therapy,’ sometimes known as ‘reparative therapy,’ is a range of dangerous and discredited practices that falsely claim to change a person’s sexual orientation or gender identity or expression,” according to the Human Rights Campaign website. “Such practices have been rejected by every mainstream medical and mental health organization for decades, but due to continuing discrimination and societal bias against LGBTQ people, some practitioners continue to conduct conversion therapy. Minors are especially vulnerable, and conversion therapy can lead to depression, anxiety, drug use, homelessness, and suicide.”

And, religion is at the center of it all.

I’ve heard right-wing religious fundamentalists argue endlessly that members in the LGBTQ community have higher incidents of drug and alcohol abuse and commit suicide at higher rates because they are LGBTQ and it goes against God so their suffering is a result of that sexual orientation or gender identity. In reality, the suffering that the LGBTQ community faces is at the hands of those same prejudicial fundamentalists that cannot love, accept and celebrate who people are—because they are LGBTQ. That is what leads to the despair, which is what leads to hopelessness and isolation.

The judgment of so-called Christianity, the same kind of Christianity that was used to justify slavery, abuse against women and girls, and so on—that is the problem. It is the messages derived from the pulpits that overflow into families, friends and personal circles where so many in the LGBTQ community see their value dwindle and develop a sense a worthlessness or where they learn that something is gravely wrong with their natural disposition of being who they are, who we all are and were meant to be.

What these judges fail to miss time and time again is that they are the ones going against what God calls us all to do—to love and accept. Love doesn’t come with parameters. Love comes with seeing people for who they are and celebrating their very identity, the very person they were destined to be, the very image that God created. Being discarded by others, especially others that you’re closest to and not respected or accepted as your authentic self is what causes disproportionate degrees of self-destructive behavior.

A number of years ago, a man used to call The Rainbow Times endlessly, leaving despicable racial slurs, homophobic and transphobic messages religiously in the middle of the night. I cannot repeat what was said to us because the words were that offensive. One early morning at 1 a.m., the phone rang which was routed to my cell phone, mistakenly. We picked up the phone because we knew who it would be. It was him.

The tirade began. Every slanderous thing he said, we countered with information. Every insult he threw at us, we kept our cool to the best of our ability. There was something that told us to stay on the phone that night, so we did. Finally, with all this anger and vitriol he was directing at us, I had to ask … “Are you gay?” There was a deafening pause. The reply left my jaw dropped.

I became choked up with tears not because I was offended by all of the things he said earlier in the conversation, but because it all became clear to me in that moment. It was his own desperation, despair and self-hatred, palpable through the distance and reflected in his heinous words—of which we happened to be on the receiving end. He proceeded to tell us about his family, his religion, how he could never come out while his mother was alive, whom he was close to as he described. But, he would never be accepted he said. We stayed on the phone with him for over an hour that night—listening. He needed to be heard and that is what we did. The demeaning phone messages left on _The Rainbow Times_ line ceased from that night forward, as he promised they would that night. I think of him often and hope that his life is moving positively ahead. He deserves it. We all do.

Every time I hear about another anti-LGBTQ ringleader “come out” as a member of the LGBTQ community, it doesn’t surprise me anymore. As matter of fact, it has been found that the most vitriolic people toward the LGBTQ community are usually that way because they have something to hide themselves.

“Conversion Therapy, also known as ‘reparative therapy’, ‘ex-gay therapy,’ or ‘sexual orientation change efforts’ (SOCE), professes to help lesbian, gay, bisexual, and transgender people to change or overcome their sexual orientation or gender identity,” the letter began. “The majority of those who practice this ‘therapy’ often do so with little or no formal psychological training, operating instead from a strict religious perspective, believing homosexuality to be a ‘sin.’”

According to the many ex-leaders, it was indeed the lessons taught through one form or another that led to not accepting and loving themselves.

“We once believed that sexual orientation or gender identity were somehow chosen or could be changed,” they wrote. “We know better now. We once thought it was impossible to embrace our sexual orientation or sexual identity as an intrinsic, healthy part of who we are and who we were created to be. We know better now. Looking back, we were just believing (and sometimes teaching) what we had been taught—that our identity needed mending. We grew up being told that being LGBTQ was disordered, sick, mentally ill, sinful, and displeasing to God. We grew up being told that loving, same-sex relationships were shallow, lust-driven, deceived, disordered, and impossible.”

Although coming to terms far too late, after damaging countless lives, these ex-leaders have called for a complete ban on conversion therapy as explained in the letter.

According to the U.S. News and World Report, “electroshock therapy, chemical drugs, hormone administrations and surgery are among the methods that have been used in conversion therapy, noted a team of experts reporting Aug. 8 in the New England Journal of Medicine.”

“Researchers found that approximately 698,000 LGBT adults in the U.S. have received conversion therapy at some point in their lives, including about 350,000 who received it as adolescents,” according to the Williams Institute.

*Nicole Lashomb is the Editor-in-Chief of The Rainbow Times and Co-Ed of Project Out. She holds an MBA from Mayrlhurst University and a BM from the esteemed Crane School of Music. Nicole can be reached at editor@therainbowtimesmass.com.