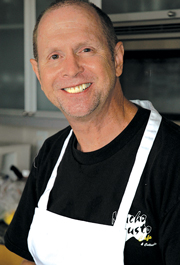 Some recent food and nutrition studies brought to mind that old Woody Allen movie Sleeper. In it, Allen plays a health food store owner who was cryogenically frozen in 1973 and is defrosted 200 years later. In one scene, the scientists treating him tell us that wheat germ and organic honey, thought to be good for us, are not, and that by 2173 they’ve discovered that the healthiest foods are things deep fried, steak, cream pies and hot fudge.

Salt may not be quite as bad as previously thought. This study concluded that Americans still need to reduce their salt consumption, but we may not need to cut it in half as current guidelines suggest. In addition, beer is apparently good for us. It may help the body in several ways, including lowering LDL—the bad cholesterol—increasing the good HDL, building strong bones and even reducing the risk of kidney stones. I’ll have another IPA, please.

Lastly, is even better than we thought. Study participants who exercised and ate lots of chocolate were thinner than those who exercised, but ate less chocolate. I wonder how hard it would be to install an M&M dispenser on the treadmill?

Of course, there has been lots of “push back” on these findings. Other scientists argue that samples were too small and methodologies were flawed, but these studies once again illustrate that nutrition science continues to evolve. We’re learning more all the time, but figuring out how the foods we eat impact our individual bodies remains very complex.

For now, I recommend that we accept and add these findings to our own personal nutrition knowledge bank along with a healthy dose of skepticism and stay tuned. There will be many additional studies and analyses that will attempt to duplicate, fine tune or dispute these results. In the meantime, I continue to believe that the old adage of “moderation in all things,” including butter, salt, beer and chocolate, is probably still the best advice.

To share your thoughts about these or other nutrition studies, ask a question or suggest a topic for a future article, contact me at john@muchogusto.com or visit www.muchogusto.com and join our Latin food forum.

The Frivolist: Jive Turkeys — 5 Non-Traditional Meals You Can Make This Thanksgiving

To Cook Is to Love: A Foodies Journal — A New Food Destination in Town