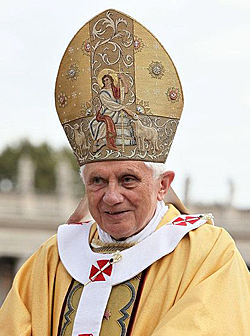 But I can’t help but feel like I’m forgetting something. Something else as terrible as a dictator killing his own people or a suicide bomber or an elementary school full of dead children… Oh! I’ve got it: a guy marrying another guy (or a lady marrying another lady).

But don’t take my word for it. Take it from Pope Benedict XVI who said as much in his Dec. 8 Message for the Celebration of the World Day of Peace (which is Jan. 1, by the way, in case you wanted to celebrate).

After decrying abortion and saying that pro-choice people are actively working against happiness and peace, he turned his attention to the gays. He said, “There is also a need to acknowledge and promote the natural structure of marriage as the union of a man and a woman in the face of attempts to make it juridically equivalent to radically different types of union; such attempts actually harm and help to destabilize marriage, obscuring its specific nature and its indispensable role in society.”

He added that homosexuality was basically “an offence against the truth of the human person, with serious harm to justice and peace.”

Got that? A woman marrying another woman is the moral equivalent to a suicide bomber. Homos are ruining marriage, and therefore peace, for everybody. Boo.

Apparently not satisfied with calling out the gays during his “peace” speech, the pope also wagged his gnarled finger at them during his Christmas speech, too.

What it comes down to is that Pope Benedict XVI is pretty freaked out about all of the gains gays and lesbians have made toward marrying for real in this world. And so he used his Christmas speech to accuse gays and lesbians of giving the bird to God.

Thanks to homos, the pope said, sex and gender are “no longer a given element of nature that man has to accept and personally make sense of: it is a social role that we choose for ourselves, while in the past it was chosen for us by society.”

In other words, God assigned you a role, damn it. You’re either a woman who wants a penis in her vagina or you’re a man who wants to put his penis into a vagina. For peace. (Alternately you can be a priest or a nun.)

This penis/vagina “duality” is “an essential aspect of what being human is all about.”

“When freedom to be creative becomes the freedom to create oneself, then necessarily the Maker himself is denied and ultimately man too is stripped of his dignity as a creature of God,” Benedict said.

Being gay, in the pope’s eyes, is a choice and a bad one at that.

All this coming from the man who has eschewed a traditional marriage in favor of an alternative lifestyle.

AG Healey on the House Passage of the Contraceptive Access Bill

God Loves You as You Are, Even if Your Parents Don’t: Supporting a Declining Parent

Creep of the Week: Why Do You Want Me Back in the Closet Marco Rubio?

Creep of the Week: Anti-LGBT Mike Huckabee Who R-Will Never Be President