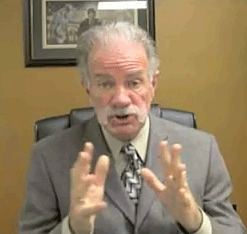 Pastor Terry Jones who says: “President Hussein Obama is a disgrace to this nation. He is an illegal president, the poster child for abortion, a frontrunner of the homosexual movement, a destroyer of the U.S. Constitution, and the great friend of Islamic terrorist governments.”
Photo: YouTube

Pastor Terry Jones who says: “President Hussein Obama is a disgrace to this nation. He is an illegal president, the poster child for abortion, a front-runner of the homosexual movement, a destroyer of the U.S. Constitution, and the great friend of Islamic terrorist governments.”
Photo: YouTube

Hey are you pissed that President Obama has been all nice-nice with the gays lately? Then you should totally set him on fire. Or at least a life-size Obama doll strung up on a gallows on the front lawn of your church with an upside down American flag flying in the background. Because that’s what Jesus would have done.

And that’s what Pastor Terry Jones did to show everyone that he was not pleased with all this gay lovin’ the President was lavishing on the queers. You may recognize Jones’ name because he’s the a$$#ole that burned the Quran to show those Muslins who’s boss.

“In times of universal deceit telling the truth is a revolutionary act,” says Jones in a YouTube video of the effigy burning. Jones is decked out in a black leather jacket and mirror sunglasses while standing in front of a trailer with “National Burn Effigy of Obama Day” written in red on it. Next to the trailer is a giant tombstone that reads “Obama Dead” sitting on a pile of dirt.

On Jones’ website he writes, “President Hussein Obama is a disgrace to this nation. He is an illegal president, the poster child for abortion, a frontrunner of the homosexual movement, a destroyer of the U.S. Constitution, and the great friend of Islamic terrorist governments.”

Did you know all of this? I did not know all of this. Jones is what you might call an information man. Always schooling. I certainly did not know Obama was the “frontrunner of the homosexual movement.” I’m not even sure what that means. But if Terry Jones said it, why it’s as good as God’s word. If God were a hateful man with a handlebar mustache.

“On Saturday, January 19th, 2012, we burned an effigy of Obama as a public expression of our disgust for his immoral, destructive, and deceptive leadership,” Jones announced proudly on his website. “It is time for a new American revolution. Let us organize, unite, and hit the streets in order to bring this nation back to greatness.”

As you know, if it’s not on YouTube it didn’t happen. So thankfully there’s a heavily edited video of the burning you can watch with your own eyes if you must.

“Do you know what bestiality is?” Jones asks the crowd (several people say no). “Sex with animals. “He,” Jones said pointing to the Obama doll, “he said it was okay.” People in the crowd understandably react in disgust and anger at “learning” that Obama is totally cool with animal f$#&ing.

Now I do not remember when the President and the Senate of the United States of America passed the pro-animal sexing act. My guess is that it’s a provision buried in some kind of appropriations bill. Sneaky bastards.

An African-American man, identified in the YouTube video as, no shit, “Michael the Black Man,” addresses the crowd next surrounded by seven other African-American men. “You see we have an effigy of Obama and one of Mr. Clinton. President Clinton,” MBM says. “The reason why he’s up there with Obama is because he deserves to burned in hell, too.”

Oh, thank you MBM for explaining that. Because I was having trouble wrapping my brain around why Clinton was being burned on National Burn Effigy of Obama Day (which, I should add, is not a federal holiday). Personally I think Clinton deserves his own day, but hey, I didn’t organize this event.