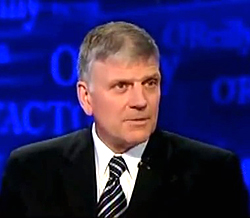 Marriage equality was a big winner on Election Day and, surprise surprise, not everyone is happy about it. There are some folks who basically say that the spread of equality is actually a sickness that foreshadows the end of the world and is proof that God doesn’t love us any more.

Christian evangelist Rev. Franklin Graham, and son of well-known evangelist Billy Graham, is one such person. He’s been moaning and groaning about how terrible Obama is since before the election. “Pray and then vote on Nov. 6, asking God for His mercy and grace upon our land,” he told his followers, urging them that a vote for Obama was a vote against God. “There’s still time to turn from our wicked ways so that He might spare us from His wrath against sin.”

Now that Obama has been reelected, Graham is in full “I told you so” mode. “I want to warn America: God is coming around. He will judge sin, and it won’t be pretty,” Graham said the day after the election. With Obama at the helm, Graham warns, America is on “a path of destruction.”

America and God, according to Graham, have broken up. Or are at least in the “off” phase of a long standing on again/off again relationship. We have “turned our back on God” as a country Graham said in an interview with David Brody on the Christian Broadcasting Network.

And in order to save ourselves we need to, um, raise Jerry Falwell from the dead? “We need someone like a Jerry Falwell to come back and resurrect the Moral Majority movement where you get people that have a moral background who are willing to come together and vote for moral issues that are important to this nation,” Graham insisted. Uh, sure. Have fun working on that.

Graham also said that marriage equality “takes the family away.” It is true. Every time a man marries another man an opposite sex marriage implodes and nothing is left but a pile of glitter.

Graham goes on to make this particularly brilliant point: “There is no way you can have a family with two females or two males, if you just think biologically how God made us our plumbing is completely different.”

If there’s one thing I don’t understand (and there are actually a few) is why people who claim that they so reverse man-lady marriage that they are morally obligated to fight against same-sex couples who want the same rights, resort to comparing this supposedly holy union to plumbing.

Now, don’t get me wrong. Plumbing is important and without it we’d be in deep shit. But I just don’t see why it’s the go-to metaphor for what folks like Graham claim is the only kind of union God likes.

I can imagine the birds and the bees speech now: “Well you see, son, one day your pipe will find a female fitting to join. Make sure you always use an o-ring for protection. No messing around with any outlet sewers and stay away from French drains, they’re w#@%$s. If you wind up with any backflow be sure to go to the doctor’s office. A little antibiotics and some cream should clear it up.” No doubt there was a warning against ballcock-to-ballcock activity and a wondering aloud about what two female fittings would do together anyway.