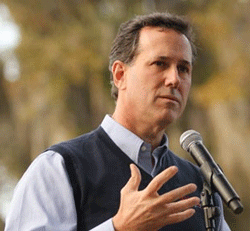 Look, loyal readers of my column. I know what you’re going to say: “Rick Santorum again? Haven’t you written enough about this douche bag filled with methane gas? He’s not even running for or even in office. At this point paying him any mind, even to call him a creep, is just encouraging him.”

And to that I say, you are correct.

But what can I say? He’s just so, well, creepy. And so obsessed with gays. So if making Rick Santorum Creep of the Week for the millionth time is wrong I don’t want to be right.

On Oct. 11, National Coming Out Day no less, Santorum spoke before the Family Policy Institute of Washington. As you know, Washington is one of three states that could legalize marriage equality in November. Naturally Santorum waxed pathetic about how two dudes marrying is the worst thing ever. Worse than killing babies, even.

Santorum then cites some statistics about 19 year olds not getting married as often as they did in 1972 or some shit “because we are destroying the institution.”

But let’s look again at his declaration. Santorum and “prolife warriors” like him believe very strongly that abortion is akin to murder. And now Santorum is saying that keeping two ladies from saying “I do” is more important than protecting the life of the unborn.

This shows how very desperate the fight against marriage equality has become and how low Santorum, an anti-gay poster boy, has sunk. Granted, not everybody thinks of abortion as baby murder, but for folks who do – ahem, Santorum – it’s hard to imagine anything trumping that issue. Until now.

“We want to be on the side of truth,” Santorum says. And, let’s face it, babies don’t understand abstract concepts like truth. Or freedom. Or equality. They can’t make protest signs. They can’t vote. They can’t run for office.

Gays and lesbians, on the other hand, are actually formidable opponents. And they know good and damn well what truth, freedom, and equality mean.

Santorum, however, has a very different definition. Regarding marriage equality he says, “Are all things equal? Is everything equal to everything else? Or are there differences? Are some things better than other things? Are some things more worthy of support than other things? Equality is a great term just like freedom is a great term but in excess it undermines the virtue that each is. The greatest threat to freedom is unbridled freedom. Everybody going out and doing whatever they wanna do. Red light, green light, I don’t care I’m free! The greatest threat to equality is equality that shows no discernment, has no basis for value.”

Hear that homos? Stop f%$#@&g up equality with your valueless lives.

The constitution and Ikea

The Constitution, Santorum says, “is the operator’s manual of America.” He then holds up a facsimile of his vision for what an amendment to ban gay marriage would look like: An Ikea-like diagram of a penis going into a vagina, resulting in heterosexual American flag baby.

“America at its soul,” he says, “is a moral enterprise.” Yes. Just ask the Native Americans. Santorum then rambles on about building a just society. But don’t get any funny ideas, gays. It doesn’t include you.