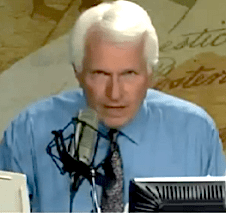 Bryan Fischer, now goes after bisexuals and transgenders for having their own Bisexual and Transgender Pride. The guy is a hypochristian and judges and uses hate towards others without feeling he is sinning. Interesting how he views life.

Hey, did you know that September 23 was “Bisexual Visibility Day?” I, personally, did not. So if you did nothing to celebrate, perhaps you can be forgiven since this bisexual day only exists, in official capacity anyway, in Berkeley, California. The day was intended to “recognize and celebrate bisexuality history, bisexual community and culture, and the bisexual people in their lives,” according to City Council Member Kriss Worthington.

Sounds okay, yes? No big deal. Just a nod and a hat-tip to the bisexuals.

Or is it? Well, if you’re Bryan Fischer (and I hope that for your sake you are not because, wow, what a sad, sad man. But if you are then, well, thanks for reading, I guess) you see bisexual day as a portent to something much more sinister. And so Fischer Tweeted, “Berkeley hosts first ‘Bisexual Pride Day.’ What’s next? ‘Pedophile Pride Day?’ ‘Bestiality Pride Day?’” Ha ha. Get it? Because a sexual relationship between consenting adults is totally the same thing as sex with a toddler or a Pomeranian.

Not content to merely Tweet about the bisexual pride scourge, Fischer took to his radio show to further complain about how low we’ve sunk as a country that we would actually treat bisexuals like human beings.

“Now we’ve been dealing with gay pride days here in America,” Fischer jeered. “Now for the very first time there’s a city, Berkeley, California, that is gonna host a bisexual pride day and then you start wondering well what comes next?”

First of all, a transgender pride day would hardly be ridiculous considering how maligned the transgender community is. Talk about people who all too often aren’t treated like human beings. If you need proof, just Google Transgender Day of Remembrance, which isn’t the same as a pride day. It’s a hell of a lot more sad. Be sure to have tissues handy.

As for equating gays, lesbians, and bisexuals with incest, pedophilia, and bestiality, these are cheap shots being made in lieu of any actual substantial argument. People like Fischer think of LGBT humans as little more than acts of sexual aberrations, something that is getting harder and harder to do as more and more people come out and demand human rights.

Really, Fischer? Really? Is that really a claim that you want to make? Because there are plenty of reasonable people, even people who don’t support marriage equality, who can see the difference between a two men who are in loved with each other and, say, a guy who keeps children prisoner in his basement as sex slaves or that dude who kills ladies to wear their skin in Silence of the Lambs. To deny that there is a huge and unbridgeable chasm there makes you, Fischer, look totally insane.

Tis The Season To Be Jolly, Fa-la-la-la-la …