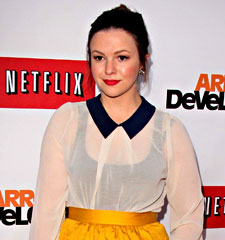 Anthony Rapp has new jobs to make the rent

Original star of Rent Anthony Rapp has joined the cast of the new musical If/Then, from the creative team behind Next to Normal.  He’ll reunite with former Rent co-star Idina Menzel for the show, one that centers on a woman about to turn 40 who moves to New York in the hopes of starting a brand new life. The musical opens March 2014, which shouldn’t interfere too much with Rapp’s need to promote his new film, Opening Night. It’s a comedy from Ryan Dixon, Nena Girsh and Jack Henry Robbins, with Robbins directing. Co-starring Cheyenne Jackson, the story centers on a high school drama club, their teacher and a visiting B-list TV star, which makes it sound something like a kinder, gentler Waiting for Guffman. It begins production this summer in Los Angeles so fans of anything that smells Rent – or Glee-adjacent can begin obsessing now.

Philip Seymour Hoffman and John Cameron Mitchell are Trending Down

Showtime has given a pilot order to something that sounds very promising, something that doesn’t involve vampires or dragons. A dark comedy, Trending Down, will star Philip Seymour Hoffman as a middle-aged man who finds himself facing career obsolescence when his advertising agency is sold into new hands. Hoffman will co-star with Kathryn Hahn (Revolutionary Road) and John Cameron Mitchell (Hedwig and the Angry Inch) will direct the pilot that’s being described as “a blistering attack on our youth-obsessed culture… a darkly comic examination of what it means to matter. Or matter not.” In other words, it’s about what’s going to happen to everyone when the cast of Girls takes their jobs away from them. And who better than Hoffman, a master of portraying miserable characters, comic or not, to embody the anxiety of the age? Can’t wait.

2014 is going to be an excellent year for television because that’s when Pee-Wee Herman will be back on it. Children (and adults) of the 1980s who worshipped at the altar of Pee-Wee’s Playhouse will see their hero return next year in a new TV project whose details aren’t fully known just yet. Paul Reubens, Pee-Wee’s creator, is 60 now and still, thankfully, happy to put on that too-tight suit. And he isn’t spilling much information beyond the fact that, along with the long-anticipated Pee-Wee movie – to be produced by Judd Apatow – the show is a go and it will not necessarily be a reboot of Playhouse. One off or not, any Pee-Wee is better than no Pee-Wee at all. And as for that movie, if the Muppets can reboot successfully in theaters and remind the world how much they loved “Rainbow Connection,” now it’s “Tequila”’s time back in the sun as our national dancing-on-bars anthem.

Amber Tamblyn is Two and a Half Men’s lesbian

Usually when a series is as long in the tooth as Two and a Half Men, the producers bring in a cute kid to boost the ratings. But with Angus T. Jones all grown up and no longer a series regular (not to mention notoriously bad-mouthing his childhood job as “filth”), the hit sitcom’s producers – already having replaced Charlie Sheen with Ashton Kutcher – are playing by their own rules once again. They’re bringing in a lesbian. Amber Tamblyn will join the show as Charlie’s long lost daughter Jenny, who moves to Los Angeles to become an actor and who shares all of her late father’s tastes, including his taste in women. It’s the coolest of possibilities, a bad-girl lesbian on prime time TV and not even wearing an Orange Is The New Black prison jumpsuit. Guess it’s time to watch our first episode of Two and a Half Men.

*Romeo San Vicente thinks lesbians should replace his least favorite sitcom characters across the board. He can be reached care of this publication or at DeepInsideHollywood@qsyndicate.com.