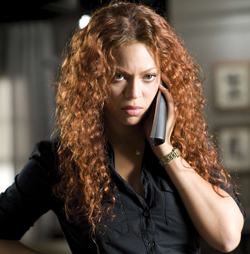 Clint wants Cruise for Beyonce. Can you blame him?

If you want to get strict about it, there’s nothing gay about A Star Is Born except for, you know, everything, especially when you consider its two most recent and famous versions starred Judy Garland and Barbra Streisand and the new one from director Clint Eastwood is going to star Beyonce. And now Clint is after big game, chasing Tom Cruise to star as the career-in-decline counterpoint to Beyonce’s rising ingénue. This would work perfectly: Cruise is already getting decent buzz for his role in the upcoming Rock of Ages, and Mission: Impossible – Ghost Protocol was a gigantic hit. That means the megastar’s once-soft-as-an-easy-chair box office moment has firmed up again and he could conceivably open an event film like this is surely going to be. Make them duet on “Evergreen,” Clint!

First they said it might be Blake Lively, then it was Emma Roberts, but now it’s official: The Carrie Diaries pilot will star respected teen actor Anna Sophia Robb. Here’s a young woman whose already-solid film career includes acclaimed performances in serious-minded kid dramas like Bridge to Terabithia, blockbusters like Charlie and the Chocolate Factory and last year’s sleeper hit Soul Surfer, so her presence can only elevate what hopefully won’t turn into just another flashy teen soap opera. Robb will take on the role of Carrie in the 1980s as she navigates school, sex and, of course, the city, but no word yet on who’ll take on the roles of Teen Charlotte or Teen Miranda. We hear that Teen Samantha will be motion-captured by Andy Serkis but that might be just a very cool rumor.

Rose Troche, filmmaker behind the classic ’90s lesbian indie Go Fish, is currently wearing her producer hat, hard at work helping her friend, writer-director Stacie Passon, get an unusual lesbian film to the big screen. It’s called Concussion and, yes, it’s about a head injury. Weirder, it’s about a lesbian in a longterm relationship who, after the title’s accident, decides to become a prostitute for women (look, if women will pay for sex in the fictional lands of Hung and Gigolos, then they’ll do it in this movie, too, OK?). The film stars Robin Weigert, an actor who’s already fueled butch lesbian crushes such as Calamity Jane on HBO’s Deadwood, but here she’ll be considerably less dust-covered. And when that’s all said and done, Troche is considered reteaming with Go Fish collaborator Guinevere Turner for the 20-years-later sequel. Who do we have to hit on the head to make that a reality?

It was inevitable. Rocket Pictures’ Gnomeo & Juliet raked in almost $200 million worldwide and that means its franchise time for Elton John, who will not rest until previously inanimate garden decorations have 3D-danced-and-sung their way into the consciousness of every moviegoer on the planet. The sequel to the kid-friendly smash is already underway and its title is Gnomeo & Juliet: Sherlock Gnomes, which will see a very small yard-dwelling incarnation of the famous sleuth hot on the case of disappearing garden gnomes. John is currently penning songs for the film and all you have to do is wait for the marketing onslaught to begin. You know a tie-in breakfast cereal can’t be far behind.

* Romeo San Vicente has electric boots and a mohair suit. He can be reached care of this publication or at DeepInsideHollywood@qsyndicate.com.