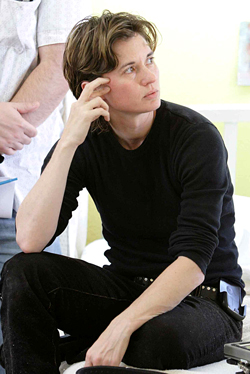 Inspiring as her acting was in the long-form “Telephone” video (you know you watched it over and over, don’t pretend) and as ubiquitous as she’s been these past couple of years, you’d be forgiven for thinking Lady Gaga had already appeared on the big screen in somebody’s movie somewhere. But no, it has taken Planet Terror director Robert Rodriguez to turn Mother Monster into her generation’s Streep. The film? Machete Kills, of course. It’s the sequel to Machete, the Danny Trejo-starring festival of violence and awesomeness made even more memorable by a weird hair-taped-to-naked-breasts Lindsay Lohan cameo and even more so by lines like “Machete don’t text.” This time around, Gaga will play “La Chameleon,” a femme fatale who, at least in the teaser poster, is wearing at least some portion of a dead wolf (sorry, PETA, we just report the news, we don’t make it). No release date set yet but you’ll know it when it’s coming: the Gaga train makes a lot of pre-arrival noise.

Hedwig sequel arriving soon, but with no extra inches

It’s been 11 years since the film version of John Cameron Mitchell’s Hedwig and The Angry Inch stormed into movie theaters and became an enduring cult classic. Since then its creator has gone on to direct the sexually explicit Shortbus and the emotionally devastating Nicole Kidman drama Rabbit Hole. But ask the fans: it’s Hedwig they still love. Hearing that cry, JCM is back at work with the wig, hatching a stage musical sequel with new adventures for his transgender heroine. There’s no title yet and its first reading will take place in September at Provincetown’s Afterglow Festival, so this is still only a comforting rock ‘n’ roll flame from a cigarette lighter in the distance. But the good news is that it’s really happening, Stephen Trask will return to write more music and, if we’re all very good and very lucky, maybe a film version will find its way into your local art house sometime after. See? There’s hope for the human race, after all.

Kimberly Peirce is wild about Harry

No, the Boys Don’t Cry director is not jumping on board a reboot of Harry and The Hendersons. (But wouldn’t it be weird and cool if she were?) She is, however, in for an English-language remake of the creepy 2000 French thriller With A Friend Like Harry, known in its European release as the more alliterative Harry, He’s Here to Help. It won Cesar Awards in France and starred Sergi Lopez – France and Spain’s answer to Alec Baldwin – as a charming man who insinuates himself into the lives of a couple he claims to have known long ago, soon exposing sinister intentions. No cast has been named yet for this new version, but Peirce is scheduled to handle duties after she finishes the Carrie reboot and actor Wentworth Miller (Prison Break) is said to be handling the script. And now all we can think of is Baldwin as Jack Donaghy as Harry.

The last large-scale earthquake to hit Southern California was in 1994. And that means geologists are predicting another, maybe even the mythical anxiety-beast known as The Big One. And you know what that means: make a movie about it and get the money before it actually happens and nobody can touch the idea for at least a couple of years afterward. This is what JJ Abrams is doing for Universal and he’s hired Dustin Lance Black (Milk) as his scribe. Working under the title Earthquake, it’s not a remake of 1974’s Charlton Heston-starring Universal production Earthquake. It just happens to be about an earthquake and just happens to have that title and come from the same studio. Got it? Furthermore, do not confuse it with another movie already in the works from New Line called San Andreas 3D, which will also be about The Big One hitting Southern California. Do not confuse them for one minute. It’ll be kind of like when there were those dueling Truman Capote movies, only these will feature lots of people being crushed to death.

*Romeo San Vicente requires Sensurround. Google it, kids. He can be reached care of this publication or at DeepInsideHollywood@qsyndicate.com.