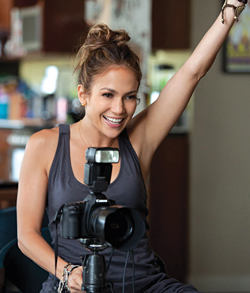 Jennifer Lopez jumping the American Idol ship wasn’t really that surprising when you consider the show’s slowly fading public profile and Lopez’s perception of herself. This isn’t a woman who likes to hide in the background of popular culture. She’s got plans, and the next one involves developing groundbreaking television. Specifically, she’s behind a one-hour drama for ABC Family about a pair of lesbian moms and their ever-growing brood of children. The untitled pilot, created and written by Queer As Folk’s Peter Paige and writing partner Brad Bredeweg, will be executive produced by Lopez and tell the story of a couple – a police officer and a teacher – whose child-filled home welcomes a troubled teenager into the mix. Next question: Could Lopez please play the cop? In fact, could it be the tough Karen Sisco, her character from Steven Soderbergh’s brilliant 1998 film Out of Sight? That would be great.

Wicked casts a spell on Daldry

Casting aside the question of whether or not acclaimed filmmaker Stephen Daldry (The Reader, The Hours, Extremely Loud and Incredibly Close) is still a gay man after being married to a woman for 12 years – look, it’s complicated and, more importantly, his own life to live – it only makes sense that Universal would at least be courting a gay-ish person to direct the film version of the musical Wicked. And that’s exactly what they’re doing. Other names have been tossed around, of course; that’s how it works. But you’re telling an alternate take on a pre-Dorothy Wizard of Oz here, so it just makes sense to go with the gay guy. Furthermore, Daldry would definitely lend an element of dignity to the situation; it’s more or less his trademark as a director, and when one of your characters is green like Shrek you need all the dignity you can get. Meanwhile, in the world of the not-quite-so-gay musical, Jon Favreau is in negotiations to helm Jersey Boys for its leap to the big screen. That makes sense, too, since Favreau’s straight guy camaraderie skills were well-honed in the ’90s with Swingers. And if the failure of Rock of Ages has proven anything, it’s that jukebox musicals need a point of view and purpose for the public to care. Favreau seems like just the right man for that job.

It wouldn’t be a shock if – after a dozen years of false starts, speculation and turnaround – the proposed film about the life of bisexual rocker Janis Joplin never happened at all. From early buzz about the late Brittany Murphy’s audition tape to Melissa Etheridge to Pink to Zooey Deschanel to Renee Zellweger and now to at least one project with Amy Adams still attached, it seems like every woman in Hollywood with singing ability has been considered, then un-considered, with nobody getting any closer to actually making a movie. So now they’ve turned to Broadway, where Tony-winner Nina Arianda (Best Actress In a Play for Venus In Fur) is now on board to handle Joplin’s life in Joplin from director Sean Durkin, recently acclaimed for last year’s dark indie hit Martha Marcy May Marlene. There’s no timeline yet and, well, we’re not holding our breath that there’ll be one, but this is the latest news on a project that may or may not take another 12 years to find its way into actual movie theaters

A one-hour television drama about the lives of gay men and lesbians in Los Angeles that doesn’t incubate its characters in a tiny homosexual bubble of interactions and life experiences? That’s a novel idea; one that shows like The L Word and Queer As Folk, as entertaining as they often were, only occasionally accomplished. But that’s the concept behind DTLA, a series from Larry Kennar – himself a former producer of L Word – that will focus on a group of friends in L.A. who don’t shy away from actually having straight friends. And the coolest news surrounding the production is the presence of both Sandra Bernhard and longtime friend Melanie Griffith co-starring as lesbian exes. The pair are already shooting their scenes and if the powers that be are smart these two will have meaty roles and not just occasional cameos (and, naturally, we also want to see them making out, exes or not). The show begins airing in Canada this October, with U.S. networks still in negotiations to run the series at an unknown date.

*Romeo San Vicente’s straight male friends are acting gayer and gayer all the time. He can be reached care of this publication or at mailto:DeepInsideHollywood@qsyndicate.com.