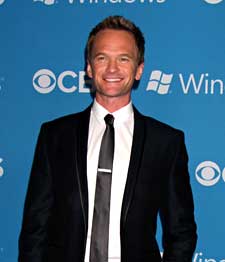 Why didn’t someone think of this earlier? No sooner will How I Met Your Mother wrap up its last season with all questions about mother-meeting finally answered, than its womanizing star Barney (Neil Patrick Harris) will leap over to Broadway, strap on a wig and heels and turn himself into Hedwig, star of John Cameron Mitchell’s Hedwig and The Angry Inch. Harris is already excited to step into the role of the transgender, German, aspiring rock star for the show’s Broadway debut (it was off-Broadway before its 2001 film version) in spring of 2014. And while there’s no other casting news yet, does there really need to be? This is a slam-dunk of a casting move, with Broadway’s favorite sitcom star/song-and-dance-man/gay role model/Tony host/Harold & Kumar villain in the lead. It’s like an engraved invitation for 15 different audience demographics to flood the box office for tickets and a ready made, Internet-igniting, post-Tony Awards performance clip before it even happens.

Margaret Cho is In Transition

Margaret Cho has her own sitcom again, this time on the Internet. Like everyone else with eyes facing forward, the comic is bypassing the TV gatekeepers and taking her work directly to her audience. The show’s called In Transition; it’s about female ex-cons (including Cho) and it co-stars performer Selene Luna, Cho’s comrade from the reality series The Cho Show. The 13-episode series will be short-form and take place entirely on YouTube, marking another instance of that site’s own transition from the number one destination for bored employees searching for kitty and twerking videos to instant TV network with original scripted content. Debuting in July, you can bet that its creator will be keeping track of hits and making sure heads roll if numbers don’t blow up. That’s what all the big TV moguls do.

Gilmore Girls/Parenthood star Lauren Graham is an ambitious sort. You kind of have to be when you’re a woman in Hollywood. The men who make decisions are almost never reliably into you, especially after you hit middle-age, so Graham’s not taking her winning streak for granted. She wrote her first novel, Someday, Someday, Maybe – witty comic fiction loosely based on her own experiences as a struggling actress in 1990s New York City – and watched it hit the bestseller list. Then Graham’s friend Ellen DeGeneres – the pair talk a mile a minute every time Graham guests on Ellen – taking note of this development, decided to step in and produce the book as a TV series. The energetic Graham will adapt the book into pilot form and, with a little luck, careful shepherding from power-friends in high places and more good luck, this thing will go to series. We think Graham is cool, so fingers crossed.

*Romeo San Vicente has spent entire three-day weekends penetrating what was often unspoken. He can be reached care of this publication or at DeepInsideHollywood@qsyndicate.com.