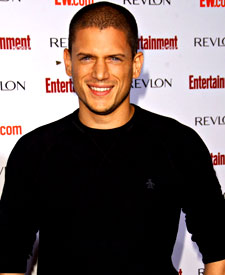 By: Romeo San Vicente/Special to TRT—

Welcome out, Wentworth and Whishaw

Actors going public with their sexual orientation may be a more and more frequent occurrence, but it’s still a big deal when they do it. And it’s especially good when it feels like their own decision, rather than, say, being hounded by the press to hurry up and get it over with after you’re seen kissing your personal trainer in public and then buying a house with her (or him). So welcome to the other side of gayness, Wentworth Miller (who chose to come out as a political statement when he refused to attend a Russian film festival) and Ben Whishaw (who apparently just got around to it being a relevant topic of conversation). Both men have upcoming projects in the works: Miller, the former Prison Break star who also wrote this year’s thriller Stoker, has just wrapped The Loft. Co-starring James Marsden, Karl Urban and Modern Family’s Eric Stonestreet, it’s a thriller – due in theaters during the summer of 2014 – about five men who share a loft for extramarital affairs until one day the body of an unknown woman is found in the clandestine love nest. Meanwhile, the hardworking Whishaw has five projects on his plate, including the new Terry Gilliam film The Zero Theorem, starring as Moby Dick author Herman Melville in Ron Howard’s The Heart of The Sea and, of course, he’s got Daniel Craig to deal with as he continues his role of Q in the next James Bond movie. Meanwhile, other actors, it’s your turn; who’s next?

When you’re one of the former members of ‘N Sync and you don’t happen to be Justin Timberlake, it’s easy to become the butt of uninformed where-are-they-now jokes. And as the lone gay member of the crew, Bass receives more than his share. So what has he been doing? Not sitting around, yearning for the good ol’ days, for starters. In addition to taking on various small acting roles, Bass is also stepping into the part of activist/producer with Kidnapped For Christ. A documentary from first-time director Kate Logan, it explores the extreme behavior modification techniques employed by conservative Evangelical Christian camps for troubled, often gay, teenagers. The film explores the inner workings of Escuela Caribe, a “therapeutic Christian boarding school” in the Dominican Republic run by Americans and, thanks to her past as a missionary herself, Logan gets more than the normal degree of access. Expect to be outraged and moved to action when it comes to an LGBT film festival near you.

What does a singing, dancing lesbian cheerleader with a gold medal in sarcasm do on her summer break? Make a horror movie, of course. It’s not all featured spots in M&M commercials for Naya Rivera, who plays the girl-loving Santana on Glee. She’s using her spare time to climb the role-rung in Hollywood and, for young women, that usually means a horror film or two. She’ll star in Home – due sometime in 2014 – about a young woman investigating a house that appears to be haunted by the previous tenant, a woman who had chosen to invite the devil into her life. It co-stars Maria Full of Grace’s Catalina Sandino Moreno and The Client List’s Colin Egglesfield and word is that Rivera does not play the demonic ghost. But wouldn’t be it kind of cool if she did? And if the ghost were the hero of the film? Somebody make this happen.

Matt Bomer finally gets to show up for work in pajamas

He’s a busy guy, that Matt Bomer. The White Collar star also has a busy movie slate with this year’s Winter’s Tale, the film adaptation of Larry Kramer’s The Normal Heart and the indie comedy Space Station 76. So he’s probably a little relieved that his next gig doesn’t involve make-up, costume fittings or green screens, only arriving at a recording studio and wearing headphones for the animated feature B.O.O.: Bureau of Otherworldly Operations. He’ll be adding his voice to those of Seth Rogen, Rashida Jones and Melissa McCarthy in the family film about ghosts who work for a secret government agency that protects people from evil hauntings. Who knows what’s up after that. For all we know he’ll also return for the sequel to Magic Mike. But until that half-naked day, let’s allow the man a chance to do his job with bedhead. He’s earned that.

*Romeo San Vicente makes them earn their bedhead. He can be reached care of this publication or at DeepInsideHollywood@qsyndicate.com.