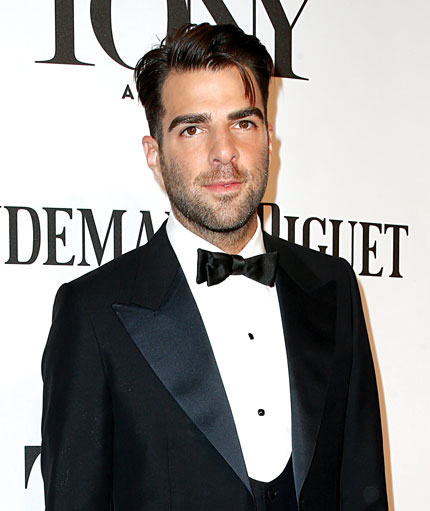 Zachary Quinto landed himself in some hot water recently over his comments regarding gay men and their alleged “laziness” when it comes to HIV prevention (this, friends, is how you slyly call your friends a bunch of whores). It happens. You get famous and then someone asks for your opinion about a public health issue and boom, you forget you aren’t a scientist. But we’re in the habit of forgiving actors for saying silly things as long as they keep entertaining us, and Mr. Quinto keeps doing that, too. He’s about to star in The Girl Who Invented Kissing, the directorial debut of Tom Sierchio (writer of the awesomely weird Untamed Heart, the one with Christian Slater and Marisa Tomei and the baboon heart transplant). It’s about a mysterious, unnamed woman (Adelaide Clemens, The Great Gatsby) and her life-altering relationship with two brothers (Quinto and Stephen Graham of Boardwalk Empire). It also stars Game of Thrones’ Natalie Dormer. We’re going to guess that the unnamed lady is somehow magical, otherwise she’d just show some ID and not act like she invented kissing. Meanwhile, we’re interested to see exactly what Quinto knows about kissing the opposite sex while not wearing Spock ears.

Bros before other HBO shows, please

Cherry Jones goes into the Light

The Hank Williams biopic, I Saw the Light, is on its way, starring Tom “Loki” Hiddleston and Elizabeth Olsen. Marc Abraham is directing from his own screenplay, an adaptation of Colin Escott’s biography. So far, so good, and Hiddleston looks like Williams, which promises to give the project that “uncanny valley” quality of weird Hollywood visual authenticity. But our favorite development is the casting of the effortlessly cool Cherry Jones as Williams’ mother. A character actor’s character actor, Jones has an Emmy for playing the President on 24 and Tony Awards for The Heiress and Doubt. Oh, yes, and she’s a lesbian, which you probably knew, but most importantly, she’s who you get when you want the big guns in your corner. And now this movie has her. Lucky movie.

Amazon, suddenly a player in televised content, has an entire roster of pilot shows planned for 2015. Naturally, because we’re really, really, sophisticated, the most promising and unusual seems like The New Yorker Presents, a docu-series that aims to recreate the experience of reading the legendary magazine. Best news: You won’t have to read a thing! The pilot episode will contain a short documentary from Academy Award-winning filmmaker Jonathan Demme, an interview with artist Marina Abramovic, one of those poems they always tuck into the bottom corner of a page in the middle of an issue, and a short film featuring Tony Award winner Alan Cumming (The Good Wife), based on a story by Simon Rich (Saturday Night Live). In other words, the whole thing sounds like an episode of Yo Gabba Gabba! with a Master’s degree.  And if it gets a full series order, more middle-to-highbrow content will stream directly into your digital device, replacing your need to keep talking about Kim Kardashian’s butt. Very exciting.

*Romeo San Vicente Presents. Always. He can be reached care of this publication or at DeepInsideHollywood@qsyndicate.com.