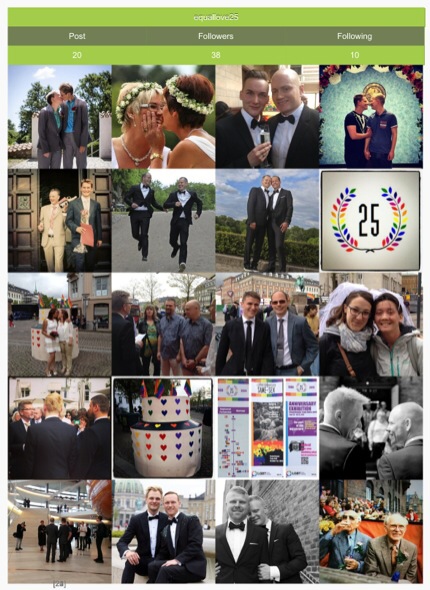 Equal Love Wedding Photos, 25th Anniversary. Send your photo from around the world to celebrate marriage equality, the Denmark way.

Twenty-five years ago the first same-sex couple was lawfully married under the Danish registered partnership law, the first of its kind and an inspiration for same-sex marriages, partnerships, civil unions and family laws in countries all over the world.

On the occasion of the ”Silver Anniversary,” an exhibition: ”Equal Love Silver Anniversary, Copenhagen 1989-2014” will be held September/October 2014 at the Copenhagen City Hall where the first couple said “yes” to each other 25 years ago. [pullquote] We want to show everybody that it was not the end of the world when the first same-sex couple was married 25 years ago. Life goes on.[/pullquote]

In connection with the exhibition wedding pictures and rainbow family photos from all over the world are being collected. People can upload their photos to Twitter and hashtag them with #equallove25 or send them by mail to equallove@lgbt.dk.

To read more about the Equal Love – Silver Anniversary celebrations visit www.lgbt.dk/equallove25. We want to show everybody that it was not the end of the world when the first same-sex couple was married 25 years ago. Life goes on. For better. For worse. And for all, irrespective of sexual orientation and gender identity.

Richardt Heers is the International Spokesperson for LGBT Denmark The Danish National Organization for Gay Men, Lesbians, Bisexuals and Transgender Persons. Contact him at: rh@lgbt.dk – richardt@heers.dk. For a list of LGBT Historical events in Denmark visit: http://lgbt.dk/english/.