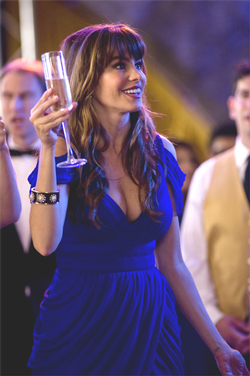 Tom Hardy as gay rugby star. Yes, we buy it.

It wasn’t bad news to hear that Mickey Rourke wanted to play Welsh gay rubgy star Gareth Thomas in a new film about the athlete’s 2009 professional coming out process, but it was, admittedly, odd news. After all, Rourke is in his late 50s and Thomas in his mid-30s. How would it work? And then came news that even Rourke wasn’t convinced he was up for the role’s physical demands. Enter Tom Hardy, currently in talks to take on the part. Talk about easy casting. This is a man whose body is more than up to the challenge (see Warrior or Bronson for all the proof you need) and whose chameleon-like abilities can see him dance around the edges of a film like Inception or practically into the woodwork in films like Tinker Tailor Solder Spy. And as for gay? He did that already too, slow-dancing with Gerard Butler in Rock-n-Rolla. Somebody teach this guy the finer points of rugby and get the cameras rolling.

Sofia Vergara in bed with Sharon Stone and…

Take one actress best known for an iconic lesbian role and another actress that lesbians simply wish would switch teams, put them both in a new film and what do you have? Sharon Stone and Sofia Vergara in bed together in something called Fading Gigolo. And while you’re pretending that the title of the film isn’t inherently off-putting and that you’re just happy to hear about a lesbian component in a new comedy, here’s bit of a twist in the fantasy good news: their sex scene will also involve John Turturro, the writer and director of the project, who stars in the Hung-like film as a man forced into prostitution out of economic necessity. Look, don’t blame the messenger. And besides, it could be Woody Allen in that threeway instead of Turturro, because he’s co-starring in the film, as well. So just count your blessings.

What that gay guy from Happy Endings is doing next

No, Adam Pally isn’t gay. He just plays one on TV. And the slovenly, irresponsible, no-rule-or-stereotype-abiding “Max,” on the hilarious, fast-paced sitcom Happy Endings, is unlike any gay character yet seen in primetime on a major network. So it’s good news to see the likeable Pally taking on a film role, during the show’s summer hiatus, in A.C.O.D. (which stands for “Adult Children of Divorce”). The comedy also stars Amy Poehler and Adam Scott, Jane Lynch, Jessica Alba and Catherine O’Hara. Weirdly enough, Poehler and Scott play romantic partners on Parks and Recreation but here Poehler will be Scott’s stepmother, the third wife of his older father. No word on what Pally’s character gets up to, but he’s showed a very specific kind of range on the other TV projects, notably as the “Young Hollywood Douchebag” on Californication and, well, the “douchey” guy on NTSF:SD:SUV. Here’s to future typecasting.

The sharp-tongued Dowager Countess might look askance, eyebrows at full arch, at a man who works for a living, but the man who invented her, Oscar-winning writer (for Gosford Park) and Downton Abbey imagineer Julian Fellowes, can’t seem to stop. Not only is season three of the hit Brit period soap already shooting, but now Fellowes has been hired by Universal to take a pass at the screenplay for their upcoming adaptation of Gypsy. Barbra Streisand and Joel Silver are producing the feature based on Stephen Sondheim and Arthur Laurents’ Tony Award-winning musical. For the young people out there, it’s the story of famed burlesque dancer Gypsy Rose Lee and her relationship with her mother Momma Rose, that already hit theaters in 1962. And as producer, it’s Streisand’s prerogative to play Momma Rose. And that’s just what she’s doing. Get ready, gays.

*Romeo San Vicente gives roses to his Momma because she was nothing like Momma Rose. He can be reached care of this publication or at DeepInsideHollywood@qsyndicate.com.