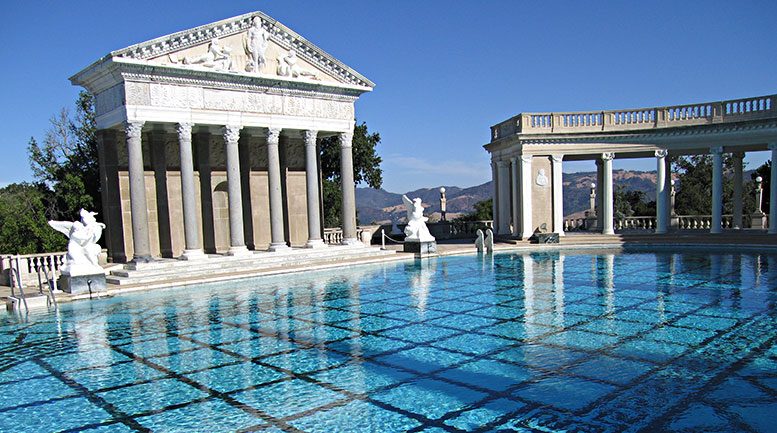 A tour of Hearst Castle is one of the true must-sees along the California Coast; All Photos: Andrew Collins

It’s just a 90-minute flight between to of the world’s legendary LGBTQ destinations, San Francisco to Los Angeles. Or you can make the drive in just six hours via bland but efficient I-5. If you’re not in a hurry, however, and you’re keen on experiencing some of the most eye-popping scenery on the West Coast, take coastal Highway 1 instead. Starting in Golden Gate Park and meander down alongside the Pacific Ocean—around Monterey Bay, over the soaring headlands of Big Sur, by the vineyards and rolling hills of San Luis Obispo and Santa Barbara counties, and through sunny Malibu and Santa Monica.

Without stops, the nearly 500-mile drive takes a little over 10 hours. But that begs a reasonable question: why on earth would you bother taking this circuitous but breathtakingly scenic route without stopping—and stopping often for that matter. The best approach is to give yourself at least a couple of days to journey along this fabled stretch of California’s Central Coast. And if you’re in no rush, consider taking five to seven days. There are plenty of fantastic lodging options along the way, and you won’t run out of intriguing things to see and do, especially if you’re a fan of wine-tasting

Here are some key highlights along this route, organized north to south, including a handful of both fancy and economic overnight accommodations.

As you drive south from San Francisco, follow Highway 1 about 30 miles south to picturesque Half Moon Bay (visithalfmoonbay.org), a lovely stopover with some memorable seafood eateries overlooking the ocean—Sam’s Chowder House and Barbara’s Fishtrap are among the standouts. There’s also a cute downtown with a smattering of galleries and boutiques, and a coastal walking trail accessed via Half Moon Bay State Beach that offers sweeping bluff-top vistas.

You’ll encounter virtually no traffic and few signs of civilization over the next 60 miles, as Highway 1 closely hugs the shoreline, passing by the funky town of Pescadero, which is worth a stop for a crab sandwich and a bowl of artichoke soup at the old-school roadhouse Duarte’s Tavern, and the West Coast’s tallest lighthouse at Pigeon Point.

The hippie-surfer vibe is palpable in the seaside collegiate city of Santa Cruz (santacruz.org), which lies in the shadows of a verdant mountain range at the northern tip of Monterey Bay. Its retro charms are many, including the endearingly creaky municipal wharf and the old-school amusements of the adjacent Santa Cruz Boardwalk, whose 342-pipe organ and massive wooden Giant Dipper roller coaster have been entertaining visitors for generations.

Also check out the Santa Cruz Surfing Museum, which overlooks Lighthouse Point and traces the culture of this activity in one of the world’s most celebrated surfing destinations, and the interactive Santa Cruz Museum of Art & History, which presents thoughtful rotating exhibits and adjoins Abbott Square Market. Here you can grab a cold brew from Cat & Cloud Coffee, Neapolitan-style pies from Pizzeria La Bufala, and other treats from this hip food hall. For a memorable dinner, book a table at Shadowbrook, a romantic old-world restaurant in the adjacent community of Capitola. You enter by riding a tiny cable car down a lushly landscaped hillside to this restaurant overlooking pretty Soquel Creek.

Appealing overnight options include Chaminade Resort & Spa (chaminade.com), an idyllically situated Mission-style property set amid eucalyptus-dotted grounds high on a hilltop on the north side of the city. Or if you’d rather be in the heart of the action, steps from the Riverwalk and a short stroll from downtown, book one of the urbane rooms at the stylishly mid-century modern Hotel Paradox (hotelparadox.com). 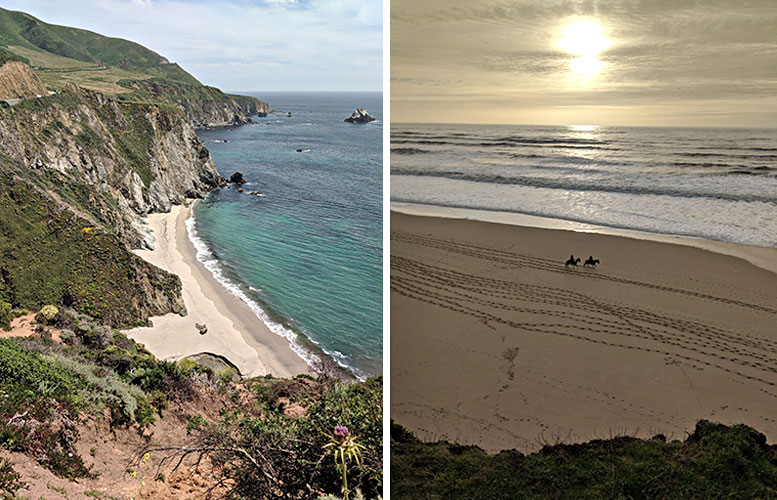 Left: You’ll find numerous points along the Big Sur coastline to stop and admire the forever views; Right: Riding horseback on the beach in Half Moon Bay, which is just 30 miles from San Francisco but feels a world away. All Photos: Andrew Collins

Long famous for the golf courses at Pebble Beach and the bustling—albeit touristy—attractions of Cannery Row, Monterey County (seemonterey.com) is also home to the intimate and low-key town of Carmel-By-The-Sea, a wonderland of English-style fairytale-esque cottages, many containing art galleries, boutiques, and wine tasting rooms. It’s worth making your way through the scrum of visitors to tour the world-class Monterey Bay Aquarium, but then consider making your way south to Carmel to enjoy the town’s decidedly more peaceful and intimate personality.

Among the many outstanding restaurants in town, Porta Bella serves deftly executed modern California fare, and Flying Fish is known for stunning Pacific Rim seafood and a superb local wine list. Make a point of visiting the historic Carmel Mission Basilica Museum and walking along aptly named Scenic Road as the sun falls over the ocean. It’s a short drive west to Carmel Valley, where a slew of prestigious wineries await, including Folktale Winery & Vineyards, with its artful tasting room and gorgeous terrace.

Carmel Valley is also home to some of the most sumptuous accommodations in the region. For the ultimate splurge (you really should stay more than one night if possible), check into Bernardus Lodge & Spa (bernarduslodge.com), a serene retreat of chic yet unfussy guest suites and spectacular villas with vaulted ceilings, private terraces with fire pits, and commanding views of the Santa Lucia Mountains. There’s also a gorgeous spa, and Lucia Restaurant & Bar turns out sublime country French-inspired Wine Country fare. In the village of Carmel-By-The-Sea, the old-world Pine Inn (pineinn.com) occupies a rambling old-world late-Victorian building on the town’s lovely main drag, just a short walk from the beach.

One of the world’s most breathtakingly beautiful coastal drives, the 85-mile Big Sur (bigsurcalifornia.org) stretch of Highway 1 begins just south of Carmel and ends in San Luis Obispo County, by legendary Hearst Castle. A tip: the evening tours, conducted by docents in fancy period attire, are especially fun. Near the entrance to the castle, you can sample stellar Tempranillo and Chardonnay at Hearst Ranch Winery tasting room, which is inside the charming 1850s Sebastian’s café and general store—an enjoyable stop for sandwiches or locally raised beef burgers.

From the coast, turn inland—after first stopping in the cute village of Cayucos to stock up on melt-in-your-mouth sweets at Brown Butter Cookie Company—and head for the small cities of Paso Robles (travelpaso.com) and San Luis Obispo (slocal.com), both of which have developed over the past 15 years into highly respected winemaking centers. Paso Robles has more than 200 wineries, plus a clutch of hip, farm-to-table restaurants—including Thomas Hill Organics and the Hatch Rotisserie & Bar. San Luis Obispo’s pedestrian-friendly downtown, which abounds with bright boutiques and lively eateries, is also worth exploring, especially on Thursday evenings, when one of California’s most famous farmer’s markets brings in great music, food, and festivity.

Add a little eccentric romance to your vacation by staying in one of the over-the-top suites at the retro-kitschy Madonna Inn (madonnainn.com) in San Luis Obispo. All 110 rooms have colorful and kooky themes—the lime green Bridal Falls suite with natural-stone accents and a not-to-be-missed waterfall shower is a standout. The historic and centrally located Paso Robles Inn (pasoroblesinn.com) has attractive, reasonably priced rooms themed after local wineries, and many have outdoor hot springs mineral tubs. 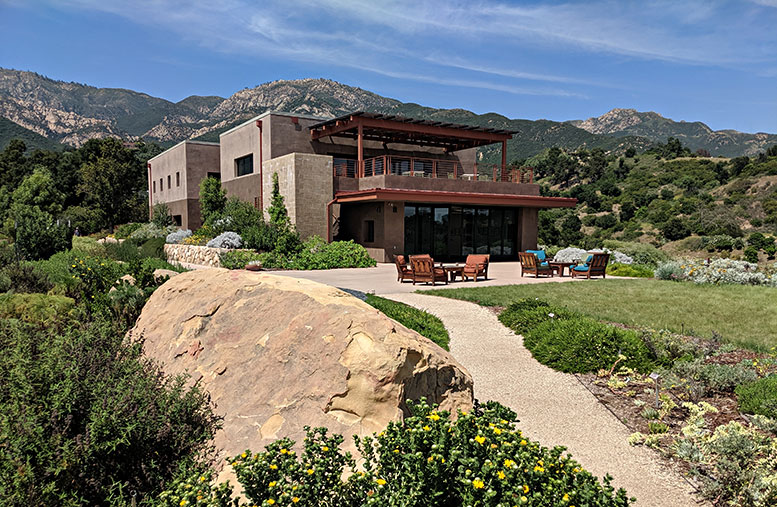 The Pritzlaff Conservation Center at Santa Barbara Botanic Garden sits high on a bluff in the Santa Ynez Foothills, offering seeing views of the city and ocean.

The California shoreline turns easterly about midway through Santa Barbara County (santabarbaraca.com), which is often referred to as America’s “Riviera,” with its blissful Mediterranean climate and architecture, sweeping beaches set against a backdrop of craggy mountains, and buzz-worthy winemakers.

Approaching from the north, amid gently rolling hills cooled by fresh sea breezes, you’ll first reach the hamlets of Santa Ynez and Los Olivos, which burst with terrific restaurants and noteworthy tasting rooms—Ellen DeGeneres and Portia de Rossi have a home in the area. Nearby Solvang is known for its Danish-inspired architecture and restaurants specializing in æbleskiver (Scandinavian-style pancake “puffs”) and Danish meatballs.

At the southern end of the county, the Spanish Colonial-style city of Santa Barbara makes for a wonderfully romantic getaway—this is another stop along the drive that’s worth at least a two-night stay. Fringing a sunny south-facing stretch of the Pacific Ocean, the city gives way to the foothills of the vertiginous Santa Ynez Mountains, where you can stroll the fragrant grounds of Santa Barbara Botanic Garden; from the garden’s Pritzlaff Conversation Center, you can see for miles across the ocean and out toward Channel Islands National Park. The city also offers fans of history and art a wealth of impressive attractions, including the late-18th-century Mission Santa Barbara and the acclaimed Santa Barbara Museum of Art.

Operated by the stylish and LGBTQ-popular Kimpton brand, downtown’s Canary Hotel (canarysantabarbara.com) has artful Moorish-inspired rooms and a convenient central setting. Check out the rooftop pool area, a sensational spot for drinks. A reasonably priced yet stylish option in the Funk Zone, the Hotel Indigo Santa Barbara (indigosantabarbara.com) has 41 cozy but well-appointed rooms and offers guests complimentary bike rentals. Be sure to stop by the hotel’s festive little restaurant, Santo Mezcal, to nibble on creative Mexican fare (the adobo-marinated octopus is superb).

Continue south along the ocean, but when your GPS recommends veering inland in Ventura toward Los Angeles along the faster 101, stick instead with Highway 1 for the longer but more rewarding journey along the coast, which takes you past the foothills of the Santa Monica Mountains and the celebrity-owned beachfront homes of Malibu. There’s breathtaking hiking in Sycamore Canyon at Point Mugu State Park, and a pretty stretch of sand—that attracts scads of pretty LGBTQ sunbathers—at Will Rogers State Beach in Pacific Palisades. From here, it’s just a quick hop to the bustling LA beachfront community of Santa Monica (santamonica.com), which its oft-photographed old-timey pier, famous Wednesday and Saturday downtown farmers market, and a cornucopia of noteworthy restaurants and fashionable boutique hotels.

Looking for the ultimate way to celebrate the completion of your magical coastal journey? Grab a seat at a sidewalk table in the supremely snazzy Georgian Hotel’s Veranda Restaurant, order a ceviche and mahimahi tacos with a glass of rosé, and soak up those ocean views one last time before you make your way inland to LA proper.