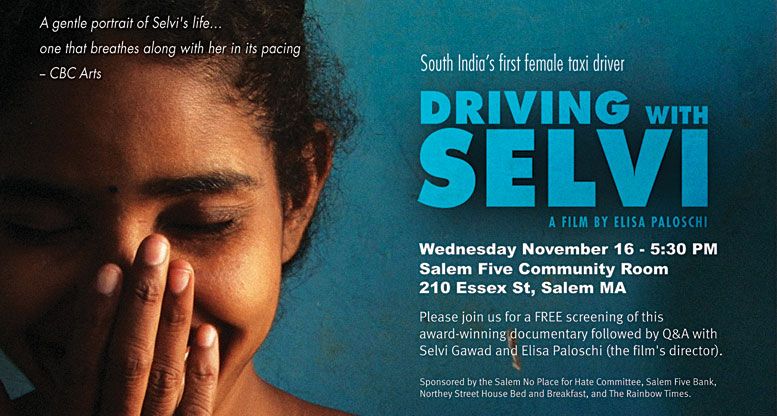 Award-winning film to screen in Salem, seeks to empower women and girls worldwide

SALEM, Mass.—After receiving multiple global awards for the acclaimed documentary Driving with Selvi, Toronto filmmaker Elisa Paloschi and protagonist Selvi Gawad are bringing the highly acclaimed film back to Salem, Mass., along with an exclusive Q&A with the duo following the screening. The viewing will be held on Wednesday, November 16 from 5:30 – 8:00 p.m. at the Salem 5 Community Room, located at 210 Essex Street, Salem Mass.

Meet Selvi: a charming, strong and utterly courageous young woman who happens to be South India’s first female taxi driver. Selvi was forced to marry at a young age, only to find her self in a violent and abusive marriage. One day, in a desperate bid to escape, she fled to a highway with the intention of throwing herself under a bus—instead, she hailed the bus and started her remarkable journey. Over a 10-year span, we see a remarkable transformation as Selvi finds her voice and defies all expectations—learning to drive, starting her own taxi company, leading educational seminars and much more.

According to Paloschi, Selvi represents the reality that gender inequity creates around the globe for women and girls.

“There are millions of girls who are seen as expendable,” said Paloschi. “Child brides, female infanticide—women are not valued around the world—not just India. But what sets Selvi apart is the courage she had to leave her situation and find help at Odanani.”

Selvi’s independence, seen through her career choice and struggle to attain what she has accomplished, represents more than just “being in the driver’s seat.”

“There is a great deal of symbolic weight in her choosing this career path. She is determining her destiny. She is in the literal drivers seat. …” said Paloschi who spent a great deal of time with Selvi to document her journey.

In segments of India’s patriarchal society, women are routinely marginalized and their rights violated. A story of courage and personal triumph, Driving with Selvi sheds light on child marriage and gender-based violence, and seeks to inspire viewers through one woman’s ten-year journey of transformation and empowerment.

“After 18 years of being told she is less than, she is an independent woman and entrepreneur who has cultivated a community of allies and people who want to see her succeed! Perhaps she could have chosen another career path—but driving is what she loves to do,” said Paloschi. “As soon as she sat behind the wheel of a car, she was confident and capable and isn’t that what we all want from our livelihood? Confidence and ambition is the greatest tool to combat ignorance!”

And the film’s intent is to bring awareness to what is happening in terms of girls and child marriage, accompanied by more work to curb the views of girls in the country.

Paloschi saw the opportunity the film presented as a catalyst for change. During production, the Indian director undertook a robust stakeholder engagement program. Local and international experts were invited to participate in recommendations for how the film might be leveraged by organizations addressing issues concerning education, equality and empowerment of women and girls.

Driving with Selvi in Salem

Join Salem’s No Place for Hate Committee for a FREE screening of the award-winning documentary Driving with Selvi followed by Q&A with Selvi Gawad and film director Elisa Patoschi.

The Sponsors for this event are: Salem No Place for Hate Committee, Salem Five, Northey Street House Bed and Breakfast and The Rainbow Times.

Viewers and attendees can “sponsor a girl to see the film in India through Save Her A Seat* IndieGoGo campaign, explained Paloschi. “Every dollar counts www.go.saveheraseat.com.”

Driving with Selvi screenings can be found at: http://drivingwithselvi.com/screenings.

To bring Driving With Selvi to your own town or community, you can request to host a screening through the film’s website as well http://drivingwithselvi.com/host-a-screening.

Five Summits were held in the spring of 2014 in Mumbai, Delhi and Bangalore, featuring the Consul General of Canada to India, Mission Director of USAID, and specialists from Thomson Reuters. These Summits were attended by over 40 organizations including the Ford Foundation, The Canadian High Commission, UN Women, Amnesty International, EY, and Ashoka India.

*Save Her A Seat Campaign

Paloschi is currently working on the film’s multi-phase social engagement campaign. Save Her A Seat is a three-tier social-impact campaign that utilizes Driving With Selvi as a springboard for gender equality and empowerment of women and girls in India through grassroots screenings, education and livelihood training/job opportunities.

“In regards to men and their perceptions of girls and women we are pursuing a community screenings series accompanied by sensitivity training in India. This will be part of ‘Save Her A Seat’ screening tour,” said Paloschi.

Together with Selvi, Elisa and a team of partners, NGOs and funders, SHAS will advocate for, and educate on, some of the key issues widely affecting women and young girls in India. This will include child, early and forced marriage, and gender-based violence. With sustainability a key objective, Save Her a Seat also seeks to create economic independence for women like Selvi, by promoting alternative livelihoods and providing bursaries to women for driver training programs.

About No Place for Hate, Salem, Mass.

The No Place for Hate Committee of the City of Salem is dedicated to promoting acceptance of diversity and combating discrimination. It is dedicated to mobilizing citizens to challenge bigotry and to promote a prejudice-free community in which all people are respected, understood, and appreciated for their differences.

The primary goal is to be a resource to the City of Salem by providing support and education on diversity issues. It seeks to protect the promise of equal justice and civil rights for all members of the community.