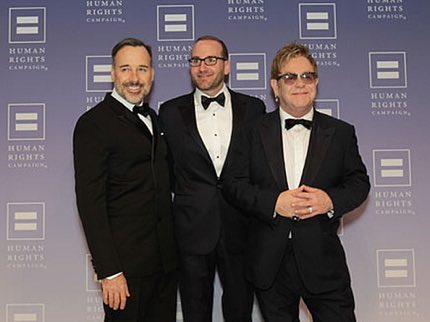 At the October 25 Annual Human Rights Campaign (HRC) National Dinner, Sir Elton John and his partner David Furnish announced that the Elton John AIDS Foundation has awarded a $300,000 grant to HRC’s Foundation to increase awareness of HIV prevention, treatment and care among LGBT people—with a specific focus on young gay and bisexual men and transgender women.

In partnership with The Fenway Institute and its National LGBT Health Education Center, the project will also feature an online media campaign combating stigma, increasing community knowledge of the role of antiretroviral medications in HIV prevention, and advancing culturally competent care training for healthcare providers. The grant is part of a new grant-making effort by EJAF to reignite the LGBT community’s commitment to addressing the HIV/AIDS crisis.

At the sold-out event—which featured remarks by President Bill Clinton, Attorney General Eric Holder, Ambassador Andrew Young, and a special performance by Jennifer Hudson—John and Furnish were awarded HRC’s National Equality Award for their leadership of the Elton John AIDS Foundation, a global nonprofit organization that works tirelessly to combat stigma, prevent infections, provide treatment and services, and motivate governments to end HIV/AIDS. Because of their leadership, the Foundation has raised and awarded more than $300 million in funding for initiatives and innovative programs in over 50 countries around the world. [pullquote]“We must put the same kind of resources and dedication and creativity that we put into the battle for marriage equality and apply it to the fight to end AIDS,” said Sir Elton John, Founder of the Elton John AIDS Foundation.[/pullquote]

“We must put the same kind of resources and dedication and creativity that we put into the battle for marriage equality and apply it to the fight to end AIDS,” said Sir Elton John, Founder of the Elton John AIDS Foundation. “Today, we have to fight stigma in the same way we did when we first took on AIDS 30 years ago – as if our lives depend on it – because they do. Now, as then, if we don’t lead this fight, no one will.”

“We are truly grateful for the leadership of the Elton John AIDS Foundation and the opportunity we now have to greatly expand our efforts around HIV/AIDS education and advocacy,” said Jeff Krehely, HRC’s Vice President & Chief Foundation Officer. “The grant will make a profound difference to the lives of countless people, especially the members of our community who are disproportionately impacted by HIV/AIDS and the stigma surrounding the disease.”

“There is a great need for this work in these states that see a high incidence of HIV,” said Dr. Harvey Makadon, Director of the National LGBT Health Education Center at The Fenway Institute. “We have already done a great deal, but this support will provide new focus and allow us to to reach providers and the community simultaneously with targeted messages that are consistent and critical for enhancing effectiveness.”

The Fenway Institute at Fenway Health is an interdisciplinary center for research, training, education and policy development focusing on national and international health issues. Fenway Health works to make life healthier for the people in our neighborhood, the LGBT community, people living with HIV/AIDS and the broader population.