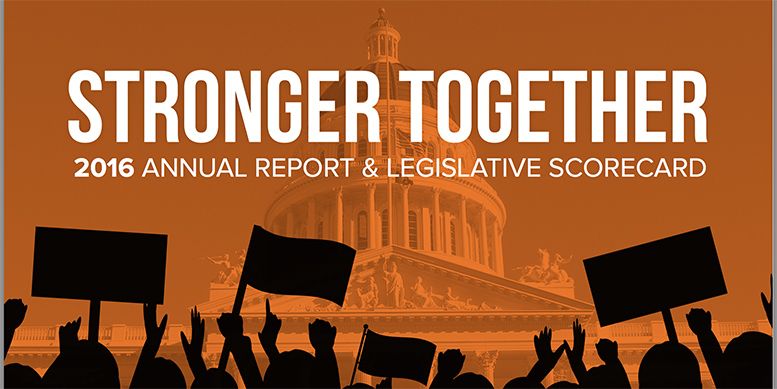 SACRAMENTO, Calif.—Equality California today released its Annual Report and Legislative Scorecard for 2016, giving a snapshot of the organization’s programs and achievements in 2016 and rating lawmakers on how they voted on Equality California’s highest priority legislation.

The Annual Report documents Equality California’s robust growth over past three years, from a total revenue of $2.0 million in 2014 to $3.9 million in 2015 to $6.4 million in 2016. It also details Equality California’s many achievements in 2016, including the passage of 8 pieces of legislation in Sacramento that advance LGBT equality and social justice. Our annual report highlights our work to register LGBT voters, elect pro-equality candidates at every level of government, reduce stigma for people living with HIV, advance fair and equitable immigration policies, and ensure that schools and health care providers are meeting the needs of LGBT people. As our annual report indicates, we expanded our federal advocacy efforts with the addition of a Washington, D.C.-based national policy director, and the growth of programs addressing the needs of the LGBT community and the challenges facing LGBT people.

2016 Scorecard ratings were based on how legislators voted on 8 sponsored bills, two sponsored resolutions and two opposed bills. This year, 44 of the Assembly’s 52 Democrats and 21 of 26 Democratic senators scored a pro-equality rating of 100 percent from Equality California. The score for Senate Democrats decreased slightly, from a perfect 100 percent Equality Score in 2015 to 98 percent, chiefly due to votes by a number of Democratic legislators on SB 1146, which requires religious universities to publicly disclose whether they have a “license to discriminate.” While only one Republican lawmaker received a 100-percent rating this year, bipartisan support overall increased over last year, particularly in the Assembly, where Republicans went from 34 percent support on average last year to 39 percent this year. Governor Jerry Brown earned a score of 100 percent, having signed all eight pieces of Equality California-sponsored legislation that crossed his desk.

“2016 was a great year for Equality California,” said Rick Zbur, the organization’s executive director. “We mounted the most vigorous candidate electoral effort in the history of the organization, expanded into Washington, D.C., and broadened our programs addressing the disparities that LGBT people continue to face in health and wellbeing when compared to the general public. Our Equality Scorecard gives members of the LGBT community and our allies the tools to understand which legislators are voting to advance LGBT equality and hold others accountable.

Each piece of legislation that Equality California sponsored in 2016 advances the organization’s mission of achieving full equality and acceptance for LGBT people inside and outside of California; reducing the disparities in health and wellbeing suffered by the LGBT community; and working for a fair and just society for LGBT people and all the communities of which we are a part.

Equality California is the nation’s largest statewide lesbian, gay, bisexual and transgender civil rights organization dedicated to creating a fair and just society. Our mission is to achieve and maintain full and lasting equality, acceptance and social justice for all people in our diverse LGBT communities, inside and outside of California. Our mission includes advancing the health and well-being of LGBT Californians through direct healthcare service advocacy and education. Through electoral, advocacy, education and mobilization programs, we strive to create a broad and diverse alliance of LGBT people, educators, government officials, communities of color and faith, labor, business, and social justice communities to achieve our goals.