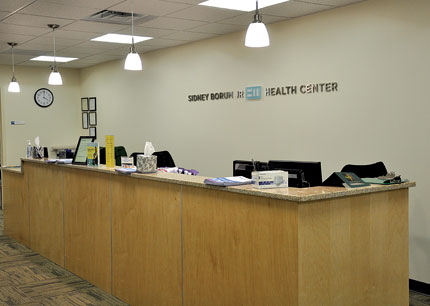 BOSTON, Mass. — The Sidney Borum, Jr. Health Center, a program of Fenway Health, provides safe, non-judgmental care for young people ages 12-29, serving as a licensed health center, mental health clinic and substance abuse center for many Boston-area youth, including those who are homeless, LGBTQ, gang-involved, low income, and those living with HIV/AIDS. Named in honor of Sidney W. Borum, Jr., an African-American HIV/AIDS activist and educator who worked with adolescents and other young people at risk for HIV transmission, the Borum (as it is called by many) has been in operation since 1988.

The first drop-in center was set up at the Arlington Street Church, which turned into a health center at 130 Boylston Street. The Borum eventually merged with Fenway Health and moved to their new site at 75 Kneeland Street in 2013.

Vetters said the new space is bigger, with more exam rooms and a larger, more comfortable waiting area, which allows them to see more patients. The behavioral health, medical and psychiatry teams are all located on the same floor, making it easier for patients and providers to work together. As part of Fenway Health, they also have the ability to provide youth with eye care, dental care and X-rays. It is conveniently located near Boston Common, the Tufts Orange Line stop and the Downtown Crossing Red Line stop.

“We say that we meet kids where they’re at, which means we will approach them with a harm reduction philosophy: if they’re not ready to quit drugs, then we’ll try and make sure they use drugs in as safe a way as possible; if they are doing sex work, then we’ll make sure they have access to STD screenings, counseling, and pre- and post- exposure HIV prophylaxis,” Vetters said. “We are sex positive. It’s going to happen, so let’s make sure they know what they’re doing and how to minimize their risks.”

Vetters shared why he believes the Borum is important to LGBTQ youth in Boston.

“We’re so normal about it all,” Vetters said. “Being LGBTQ identified is not an outlier status for us; we know these kids, their lives, the fears and concerns they have, so we can just talk to them about it in the same way any other pediatrician will talk to a straight kid from the suburbs about a sports physical. It’s so easy for LGBTQ youth to come here because they don’t have to explain everything all the time. We get it.  Also, for trans youth, we have the clinical experience and expertise to provide them with the highest quality of care and we know how to talk to their parents and ease their parents through the worries and concerns about their kid’s safety and future. All these youth can come and see us and know they won’t be sitting in the waiting room feeling like everyone is staring at them, that the nurse doesn’t know what pronouns to use, that they’ll be shamed for having anal sex. It’s their own space and they are utterly comfortable and confident in it.” [pullquote]“Based on my conversation with some of my members that regularly go to the Borum for their medical and behavioral health, I’ve seen first-hand a transformation and happiness in their faces,” said Alinsug.[/pullquote]

Coco Alinsug — outreach and insurance manager for Fenway Health, executive director of the North Shore Alliance on LGBTQ Youth (NAGLY), and a commissioner on the Massachusetts Commission on LGBTQ Youth — shared the impact he believes the Borum has on the lives of young people.

“Based on my conversation with some of my members that regularly go to the Borum for their medical and behavioral health, I’ve seen first-hand a transformation and happiness in their faces,” said Alinsug. “In fact, I have a kid whom I first met at NAGLY at 15 and is now 25 years old and has been a client of the Borum also about that time. I was curious, considering I work in both organizations, of why she lasted 10 years and still has the Borum for her needs considering that she lives in Lynn and it’s a long travel for her. She said, ‘I like it there, Coco. I am so comfortable there. The staff are cool and I feel safe, especially during my transition.’”

Karin Burke-Lewis, director of behavioral health at the Borum, shared that none of her staff have been at the Borum less than four years, and the longest-term staff member has been a clinician for 12 years.  [pullquote]“Our work, and our mission, is to provide care to these young, often queer or questioning young people, with compassion, no judgment and really, really taking to heart the essence of meeting these young people where they are at. [/pullquote]

“These are all very dedicated, committed adults who are passionate about the kids we serve,” said Burke-Lewis. “Our work, and our mission, is to provide care to these young, often queer or questioning young people, with compassion, no judgment and really, really taking to heart the essence of meeting these young people where they are at. We can only hope that we measure up even a little to Sidney Borum, Jr. himself, and how he did this work with these young people over 20 years ago when he was out in the trenches trying to reach these kids.”

The Borum moved to 75 Kneeland Street in 2013.
Photo: Courtesy of Fenway Health

Burke-Lewis and Vetters shared several stories of clients at the Borum, including many from transgender youth.

“I’ve had a patient who was in the pediatric psychiatry in-patient service multiple times in one year, missing school, falling behind, getting more profoundly depressed, taking three psychiatric medications,” said Vetters. “Working with the family — family meetings with the behavioral health team, close collaboration between our pediatric psychiatry, behavioral health and me — we were able to start testosterone to support this kid’s gender transition. Now, three years later, he’s off the psychiatric medications, back at school. It’s not magic, just a close listening to the child, supporting their gender identity, working regularly with the parents and the family, and being able to do it as a team of medical, psychiatric and behavioral health professionals who understand transgender kids.”

Vetters said people can support the Borum by supporting Fenway through their annual Men’s Event and Women’s Dinner Party. He also noted interest in finding funding and support for their small off-site clinic at Bridge Over Troubled Waters, the only Boston area youth homeless shelter (which also reserves 30 percent of its beds for homeless LGBTQ youth), and the clinic the Borum runs at Youth On Fire, the homeless youth drop-in center in Harvard Square. Donations of quality, clean clothing are also welcome for the homeless youth that come to the clinic.

For more information on the Borum, visit www.sidneyborum.org or visit the Borum’s Facebook page at www.facebook.com/theborum.